About six weeks ago, when the world was a very different place than today, we had the privilege of premiering a song from En Ergô Einai, the remarkable new album by the unconventional Swiss black metal band AARA. Some of what we wrote then bears repeating today, when we now get to bring you a stream of the entire album in advance of its April 3 release by Debemur Morti Productions.

In the first place, the album draws inspiration from the Age of Enlightenment in 18th-century Europe, and “serves as a tribute to the duality in man’s pursuit of perfection and the futility found therein.” With the album’s opening song “Arkanum” as the immediate context at the time of our previous premiere, we shared these words from the band: 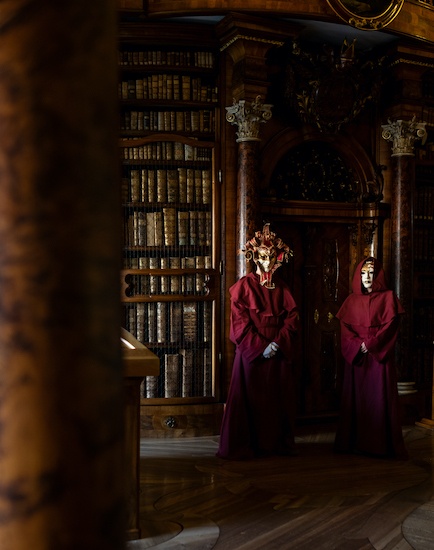 “An acoustic spherical intro by V. (Blut aus Nord / Yeruselem) leads the listener into the first chapter of the journey of man’s search for knowledge and meaning in the times of enlightenment.

“For the first time, man is confronted with the idea of the existence of an individual, detached from religion and classes – driving forward the development of science and culture. A constant alternation of emotions and moods in the song structure portrays the rift between new and old, expresses the detachment from the conventional and euphoric mood.

“This is the beginning of a development that will plunge man into deep questions and the demand for significance. Man between the search for meaning and the bitter insight of his own insignificance.”

We lead with those words not only because they provide vital insight into the music itself, but also because it seems that the current time is both testing whether the stunning changes wrought by the Enlightenment will survive, and also reminding us in brutal and bitter ways of our own insignificance, of the futility of our grandest exploits, and of the fragile nature of our existence.

With respect to the music, we’ll also repeat this from our earlier premiere as a way to set the stage for the full album stream:

At the beginning of “Arkanum“, when Vindsval weaves his spell, synthesizers and acoustic instrumentation create a mystical harmony of shining celestial tones and moodier meditations. The effect is to induce a reverie. But those musing moments are soon shockingly shattered by a sudden storm of hammering drums, swarming guitars, and throat-splitting shrieks.

Through that storm of intensity, however, a heart-wrenching melody flows, carried by rippling, glimmering tones that don’t quite seem the product of human ingenuity. “Heart-wrenching” may not be exactly the right phrase, because at the same time the melody also seems to manifest yearning and uplifting qualities. Maybe it’s better to simply call out the ethereal clarity and beautifully fluid and morphing character of that melody, and its ability to pierce the heart in the midst of such an extravagant sonic upheaval.

The blasting propulsion of the song is unrelenting, as are the frantic hum of the bass and the unbridled torment of the vocals. The music makes the pulse race at a torrid pace, but the song rockets into the skies, like a hawk exulting in a thermal, with us in its clutches. At the end, it sounds like some angelic host raising their voices in glorification.

From that stunning opening track, AARA continue to demonstrate their adroitness at integrating melodies of stirring emotional power (often with a pronounced connection to the era that inspired the album), assaults of harrowing ferocity, and passages of wondrous, soaring glory. The music of “Stein auf Stein” surges and whirls in extravagant displays of instrumental ebullience, accompanied by screaming vocals so intense that they seem to reserve nothing for tomorrow. The song channels the chest-bursting thrill of world-changing discovery.

By contrast, the first half of “Aargesang (Aare II)” is mesmerizing. Rain falls, and synths create an atmosphere of mystery and wonder, a feeling that somehow persists even when the drums begin battering and the riffing begins to boil and burn, seeming to channel sensations of challenge and even desperation in the face of conflict and daunting odds. Those same feelings persist and become even more delirious within the pulse-pounding tumult of “Entelechie“, though the scale and sweep of the sound and its intensity again makes us feel as if we’re witnessing a great struggle on a planet-spanning stage. The trilling melodies are tremendously penetrating and memorable, and play a big role in making the song so spectacular by the time it ends.

AARA close the album with the stunningly dynamic “Telôs“, which seems like a great journey all by itself, moving through sonic phases of splendor and devastation, of grief and grandeur, seeming by itself to encapsulate in epic fashion the themes that drove the creation of the album as a whole — the contrasts between humankind’s heroic striving for perfection and the futility of those efforts, between our vaulting ambitions and overweening sense of importance and the crushing lessons of humility that we are always forced to re-learn.

But having said that, “Telôs” ends by sending us rocketing into the skies again. It is undeniably a tremendously thrilling way to end an album that is itself a magnificently thrilling creation.

En Ergô Einai was recorded, mixed, and mastered at Chäuer Studios Bärn, and the cover art was created by Michael Handt, with artwork design by Naturmacht Studios. The album is available for pre-order now, in a variety of formats:

4 Responses to “AN NCS ALBUM PREMIERE (AND A REVIEW): AARA — “EN ERGÔ EINAI””