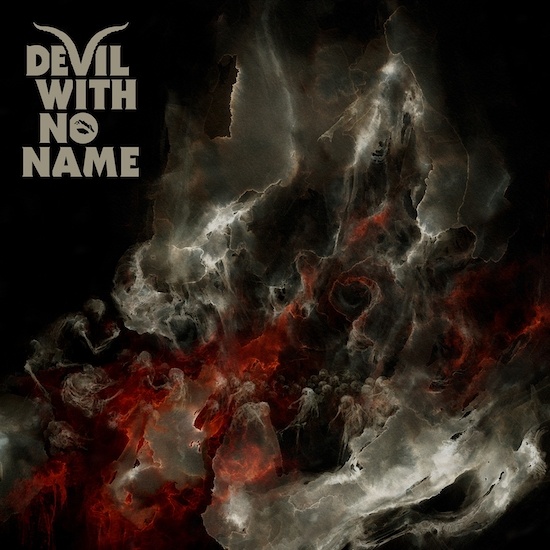 (Andy Synn introduces our premiere of the self-titled debut EP by the western U.S. black metal trio Devil With No Name, which is set for release on May 22nd.)

Unlike most Black Metal bands, Devil With No Name take their inspiration not from the chilling heart of winter but from the burning heat of the Arizona desert, whose desiccated desolation is, in its own way, just as bleak and inimical to human life as the icy vastness of the frozen wastes. 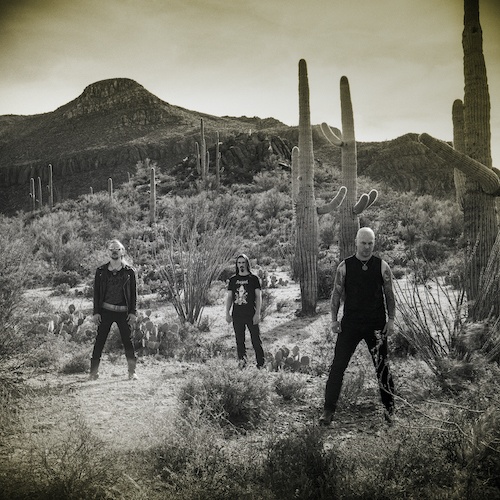 Comprised of Andrew Markuszewski (Lord Mantis, Avichi, Sonoran Rebel Black Magick) on guitars and vocals, Michał Juśko (Sovereign) on bass and vocals, and Cody Stein (Void Omnia) on drums, Devil With No Name may not be the first band to exchange northern darkness for searing southern heat (both Cobalt and The Funeral Pyre immediately spring to mind when I think about bands playing Black Metal beneath a blazing sun), but they’re definitely still in rarefied company all the same.

Thankfully their short but sweet self-titled debut makes a strong case for just why the trio are going to be “ones to watch” going forwards, displaying true grit and grimness in equal measure on tracks like “Grand Western Apostasy” and “Sycophants of the Covenant” which, at times, recall the best moments of Nachtmystium (albeit with less heroin and more hellfire) and/or the Southern Fried Darkness of Glorior Belli.

Hopefully this EP will serve as a springboard to even bigger and better things in the future – I for one would love to see/hear them lean into their Leone/Morricone influences even further – but, until then, I urge you all to take a listen to these four tracks, which the band themselves have playfully-yet-poignantly dubbed “…a blaze on the western ground”.

Mixed and mastered by Ken Sorceron (Abigail Williams, Lord Mantis) and featuring eye-catching artwork by Rodrigo Pereira Salvatierra, Devil With No Name will be released on May 22nd on all digital platforms and a limited pressing on 180-gram black vinyl LP in a gatefold sleeve, via New Density.