In its earliest formation the Montréal band Shezmu was a duo consisting of vocalist/guitarist Olivier Bérubé Emond (aka Comte Bergaby) and drummer Marc-André Labonne. Following their self-release of a demo and two EPs under the banner of Les Fleurs du Mal Productions (with the second also being co-released through Iron Bonehead Productions), they were joined by bass player Yanick Tremblay-Simard (Sol Miracula, Aiauasca), and that trio recorded a debut album entitled À Travers Les Lambeaux, which is now set for release on July 27th by one of our favorite labels, Krucyator Productions.

As on their previous releases, Shezmu’s lyrical themes for the new album draw upon ancient history, but here the songs explore the themes of rage, sorrow, and madness. Employing ingredients from the realms of doom, black metal, and death metal, Shezmu’s music channels these sensations and experiences, reaching depths of profound anguish and manifesting the triumph of darkness over sanity.

Today we present the album’s title track, which the band tell us is “about suppressed emotions and actions — feelings that, a long time ago, were part of the human routine, but which are now considered unacceptable, even illegal”. The song explores themes such as “violence, loss of control, and the virtues of death.” 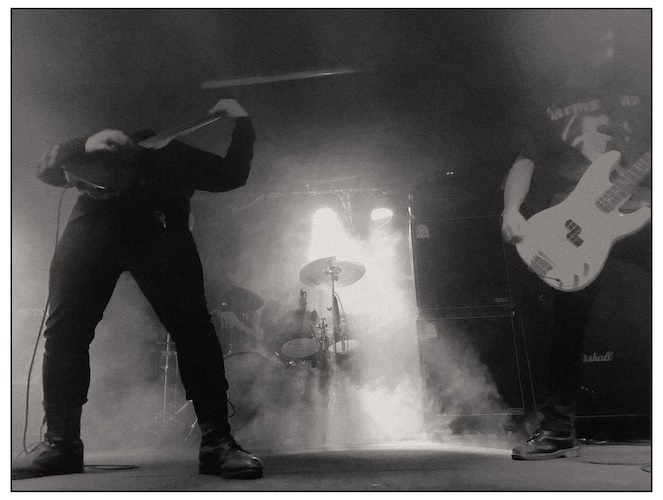 The music delves into these ideas and feelings with electrifying emotional intensity and stunning “physical” power. The drum rhythms are absolutely spine-shaking. The bass delivers gravel-throated, gut-gouging pulses. The riffs are ravaging, laden with mind-clawing distortion. And the vocals are the kind of deep, echoing roars that put a shivering chill on the flesh.

The song cycles back and forth through slower and more accelerated speeds, but doesn’t simply repeat what happens in each state of momentum as it evolves. In its first acceleration, the drums hammer with brutal force, and the riffing becomes even more demented, flaring into peals of dissonance. As the pace relents, the guitar seems to moan in freakish tones, accented by disturbing pick slides and harrowing cries. When the music charges again, it’s a pounding gallop, and the feeling of feverish lunacy increases — and persists when the rhythms become a brutish stomp.

With a scream, the song becomes a juggernaut of jackhammering destruction, and the riffing a wild, spasming and swarming manifestation of delirium and despair. Slowing again, the music spawns visions of a monstrous, stalking, paranormal menace. Through its changes, the song does seem authentically to capture those themes of “violence, loss of control, and the virtues of death”.

À Travers Les Lambeaux features cover art by Salvator Rosa (the painting “La Tortura De Prometeo”), adapted by Dan Yang. Krucyator Productions will release it on CD and digitally, and you can pre-order and pre-save it through the links below: