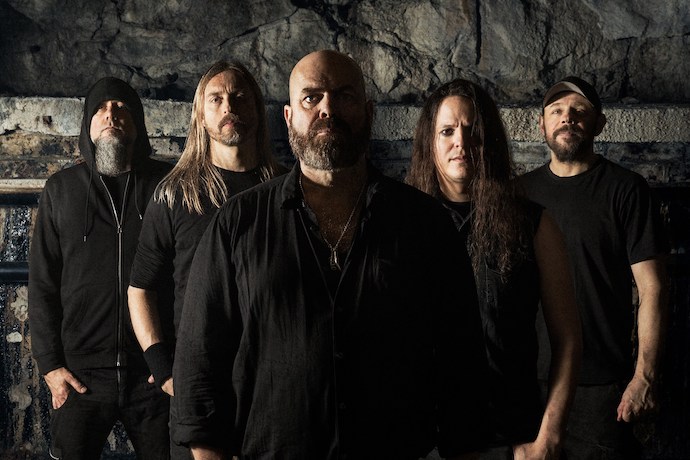 (With this post Andy Synn embarks on a week-long excursion into shades of doom, beginning with this trio of reviews.)

So far this year the majority of my writing has tended to focus more on the Death and Black side(s) of things, with maybe a bit of Tech/Prog/’core thrown into the mix when the mood strikes me.

But, for whatever reason, very little from the doomier end of the metallic spectrum has grabbed my attention.

This was a little concerning. After all, every year there are several doom-laden diamonds which make my “Critical Top Ten List” with ease – the last few years alone have given us fantastic albums from Fvneral Fvkk, Sinistro, Loss, and more – but so far 2020 seemed to be really lagging behind.

Or so I thought… because over the last couple of weeks I’ve dug up, unearthed, or just randomly stumbled across so many brilliant Doom (or Doom adjacent) albums – some not yet released for public consumption, some a full five months old already – that I’ve decided to dedicate this entire week to the dreary, desolate, delights of the genre, beginning with the new albums from Exgenesis (CO/SE), Funeralopolis (CH), and Sorcerer (SE). 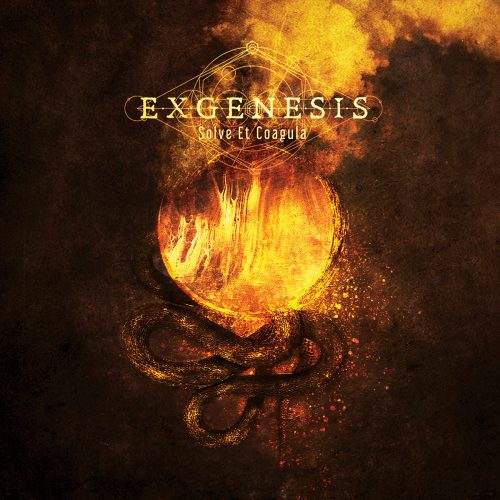 It’s been quite some time since we last/first heard from Exgenesis – over five years, in fact – but good things are always worth the wait, and the band’s long-gestating debut album delivers the sort of darkly melodic, Death/Doom drama that fans of bands like Daylight Dies, October Tide, and In Mourning will undoubtedly fall head over heels for.

I’ll grant you that, from the brawny, brooding guitar tone and gritty, anguished growls to the ever-present threads of beautifully bleak melody, Solve et Coagula isn’t an attempt to break the mould by any means, but it’s still one of the most impressive examples of this particular style I’ve heard in some time.

What really helps it stand out from the crowd is the band’s inherent grasp of dynamic and flow, juxtaposing passages of evocative, emotionally heavy Doom with eruptions of deathly fury and moments of meditative melodic calm, in a way that instantly/consistently captures the listener’s attention.

The first half of opener “Hollowness”, for example, is all intricate, atmospheric fretwork and colossal, crashing chords, leaning heavily towards the doomier side of things. But, over time, the song grows some nastier teeth and claws (at times even hinting at a subtle Black Metal influence) as it builds towards a far more aggressive and intense finale.

Similarly, “Embers”, is all grim grooves and moody malevolence, topped off with a striking blend of truly anguished vocals and piercing melodic leads, whose fluid structure seems to be in constant motion, while “Where the Hope Ends” doubles down on the doomy desolation with a blend of deathly heft and weeping melody reminiscent of Novembers Doom at their most physically and emotionally devastating.

It’s very clear that the whole band brought their very best to the table this time around, and nowhere is this more clear than during the album’s dual centre-piece, “Solve” and “Coagula”, moving smoothly from the uplifting atmosphere and soaring melodies of the former to the devastatingly dynamic use of light and shade, heaving guitars, heartwrenching vocals, and intricate, proggy instrumental passages, of the latter.

Make no mistake about it, Solve et Coagula is a real, if flawed, gem of an album (I’d argue that it would have worked better to end with “Intracosmos” than “Stasis”, but clearly the band themselves would disagree) and well worth every penny. 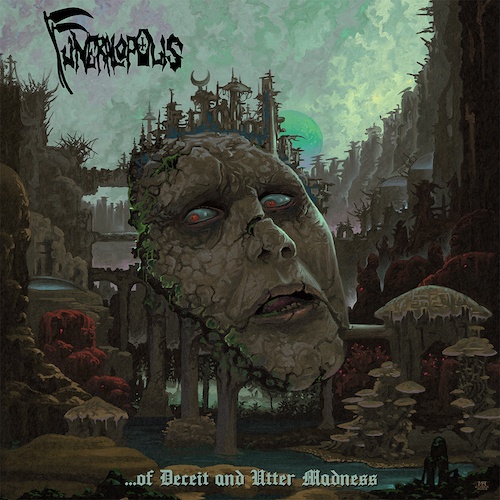 FUNERALOPOLIS – …OF DECEIT AND UTTER MADNESS

Grisly, guttural, doom-laden Death Metal is the name of the game on the debut from this Swiss quartet, which delivers ten (well, eight, plus an intro and interlude) tracks of prime Autopsy-meets-Incantation auditory filth and fury.

It’s eminently clear, from the moment that “Crawling Caskets” lurches into life in a sickening display of grimy, Grave-esque guitars and humongous, heaving chords, that Funeralopolis aren’t concerned at all with innovation, just pure intimidation, and that, while not afraid to pick up the pace here and there to maximise their impact, the real aim of the game here is to wear down your resistance through sheer sonic attrition.

That doesn’t make …Of Deceit and Utter Madness a purely one-note affair, however, and the group are smart enough to shift things around and switch things up so that, as unrelentingly ugly as the music is, it’s also designed to keep you engaged and on your toes.

Take early highlight “House of West”, for example, which kicks in hard with some primitively punishing blast ‘n’ trem Death Metal, before dropping hard into a crushing, cadaverous crawl, whiplashing back and forth between the two extremes as the song progresses while also finding time to drop into an even lower and slower, bass-driven groove at one point, as if to say “yes, we definitely can go even doomier.”

Or maybe the sheer, suffocating intensity of “Devouring Crypts of Darkness” (which really does live up to one particular use of the word “crushing”) or the primal, d-beat driven Death-Doom of “The Envenomed King” – combining sluggish, bone-grinding grooves, savage, splatterfest blastbeats, and pissed-off, punky attitude in equal measure – would be more to your tastes?

Either way, anyone who likes their Death Metal on the crushingly claustrophobic end of the scale, or prefers their Doom to come with a side order of gnarly riffage and snarling venom, would do well to check this one out, as while it isn’t an outright home run by any means it’s definitely still a hell of a lot of fun, and bodes well for the band’s future if/when they finally find a way to step out of the long, grim shadow of their idols. 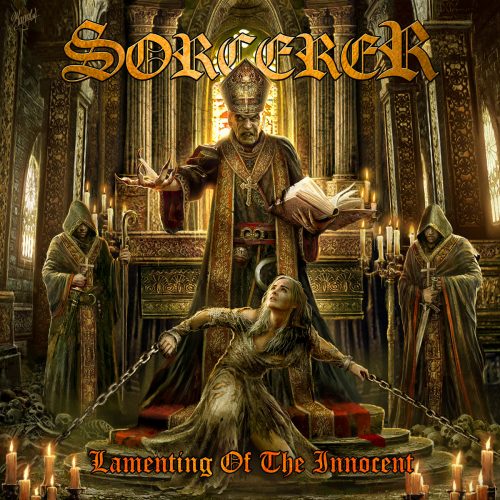 SORCERER – LAMENTING OF THE INNOCENT

The word “epic” gets a bit of a bad rap these days, largely because of how over-used it’s become. But there are still occasions where its use is richly deserved, and the new record from Swedish “Epic Doom” band Sorcerer is definitely one of them.

Equal parts Candlemass, King Diamond, and Queensryche, yet never feeling dated or derivative, Lamenting of the Innocent is pure, Heavy Metal glory in the most grandiose sense, with a backbone of pure riff-craft and an unashamedly melodramatic streak that should appeal just as much to fans of more modern doomsters like Crypt Sermon, Khemmis, or Evergrey as it does to old-school afficionados.

It’s not a perfect release, of course (the mid-album lull could easily be fixed be excising cliched pseudo-ballad “Deliverance, for one thing) but it’s an undeniably epic and irresistibly infectious listening experience all the same, built around a fusion of classic songwriting skills and subtle progressive embellishments that give every song a distinctive identity and a unique set of hooks.

“The Hammer of Witches”, for example, is five minutes of hefty riffs and punchy percussion, all topped off with a heroic vocal performance and a stunningly catchy chorus refrain (with some brilliantly employed harsh/clean vocal interplay, something which I wish the band had experimented with more across the rest of the album), while the title track is eight minutes of doomy swagger and mournful melody with yet another stunning chorus and several unexpected tricks up its sleeve (not least of which is an impressively effective shift towards an almost Death Metal style approach during the bridge).

And while lesser bands would probably have relied solely on the titanic, titanium-clad lungs of vocalist Anders Engberg to carry the day for them, Sorcerer are smart enough to know that having a good (nay, a great) singer is only half the battle, and have obviously put just as much effort into the music itself so that the vocals never overshadow or outshine the rest of the band’s efforts.

“Institoris” is a perfect example of this, as the giant, groovy main riff (courtesy of guitarists Kristian Niemann and Peter Hallgren) is a thing of bombastic beauty, and an instant winner in its own right.

But, there are also many more subtle touches at work too, such as the way in which the guitars in the chorus carry just as much melody as Engberg’s soaring vocals, or how the switch to a doomier delivery during the bridge is accented by some ingenious keyboard embellishments.

Understandably, “subtlety” probably isn’t the first thing you think of when listening to an album as larger-than-life as Lamenting of the Innocent, but it really is the little nuances – such as the creeping layers of melody and heaviness during the stomping verses of “Age of the Damned”, or the way in which closer “Path to Perdition” slowly but surely increases in intensity without you realising it – which make this album such a winner, and one which I highly recommend to anyone with even an ounce of magnificence in their soul.