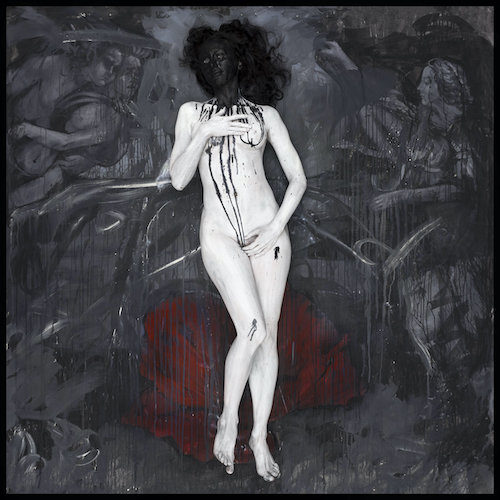 Opium, the new album by the Romanian funeral doom band Descend Into Despair, is a classic example of a musical river. It began somewhere high in the mountains (a collective of minds). As the waters flowed down, they picked up an increasing variety of ingredients and became enriched, eventually gathering in a vast array of sonic textures and changing moods as well as works of visual art. By the time it reaches the sea (what by all rights should be a sea of listeners), it has become a flow of great and branching power. And as it mingles with the waters of that sea, it will become something different again, as the listeners bring their own experiences and emotions into the interpretation of what they hear.

The album truly is vast — an hour’s worth of music divided into only three tracks — and both the scale of its dramatic power and the intensity of its emotional impact are sweeping. It’s also musically rich, both in the variety of its instrumental and tonal textures (many of which are foreign to the traditional experience of funeral doom) and in the spectrum of the voices. And like a great river, it has the capacity to carry listeners away across changing soundscapes, and to submerge them in its extravagant depths. 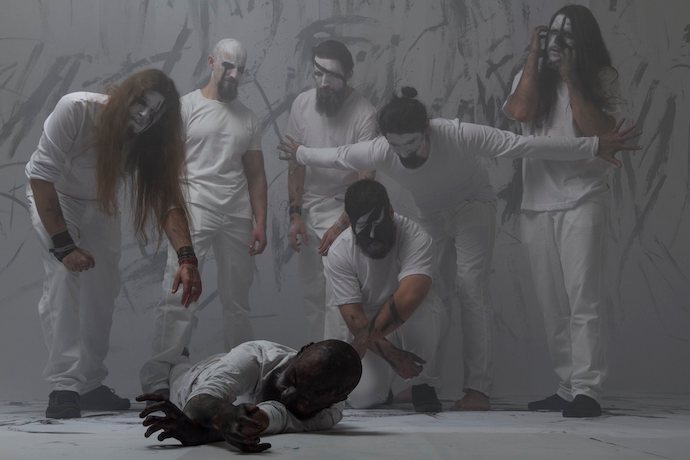 Opium will be released on May 31st by the Funere label, and we’re presenting a full stream of it today. By way of introduction we’ll begin by sharing the answer given by Xander Coza (who performed vocals, guitars, and analogue synths on the album, and is also a member of Pantheist) in an interview with Friedhof Magazine when asked whether Opium has a concept:

“The album definitely has a concept and we are extremely proud of that. Opium attempts to cast a fresh shade on the old dichotomy between light and darkness, explore the vast realms in-between through perception, pervasion and perversion – and project this onto the stained canvas of human psyche; an inner fringe reality where darkness can and will consume light while also infusing it with meaning – like ink blots on a pristine sheet of paper. We feel there’s a whisper-thin line between realities – that can easily be broken by a scream; an endless and shadowy continuum at the boundaries of sanity and alterity, of induced delusion and deluded illusion, an addictive mental chemistry.

“We have decided to call our journey through these twilight spaces OPIUM. Our new album has a trifold structure: two mirror opposites and a transition. As we departed from Synaptic Veil, we felt that Descend into Despair needed to hone its conceptual edge again. As such, our musical motifs, lyrics, imagery and artwork are heavily focused on these ideas.” 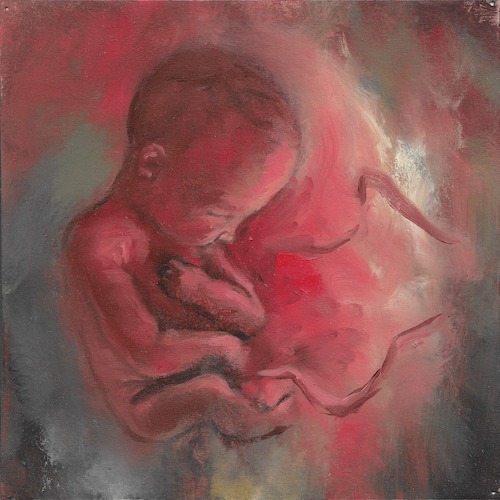 The album’s first segment, as Xander explains in that same interview, “is meant to dissect light into its parts then to weld it back together”.

Shimmering celestial tones and a woman speaking in a melodic voice introduce “ensh[r]ine“. As interpreted by Tara Vanflower, she is singing to an unborn child. The sound cycles, rising in volume and subsiding, and within it, darting and swirling keys magically reverberate. The atmosphere of the music morphs as heavy chords slowly intrude, signaling a change in the ambient music, which begins channeling a feeling of tension bordering on anguish.

The drums and stringed instruments slowly boom as a gargantuan growl radiates from abyssal depths and bass notes moodily pulsate. There is still a feeling of mystical radiation in the ambient music — it gleams with unearthly light, and rings as if ethereal beings are singing — and the rhythm becomes more animated, while the vocals echo with more wounding intensity. As the rhythm slows again, the music becomes more heartbreaking but no less spellbinding (and no less spine-jarring). It’s as if we’re falling through star-shine and thunder, surrounded by glimmering lights and moaning phantasms, but conscious of heavy upheavals around us as well.

When the rhythm vanishes, the music immerses us in a collage of mystifying sounds, and when the rhythm section returns, the song assumes a mantle of perilous grandeur, accented by a beautiful guitar solo, and then becomes a jolting, jackhammering phenomenon, paired with riffing that seethes and vocals that veer from roars to howls and cries of unnerving passion and pain. As this first massive movement of the album draws to a close, reverent choral voices sing, bringing to mind a haunting classical requiem. 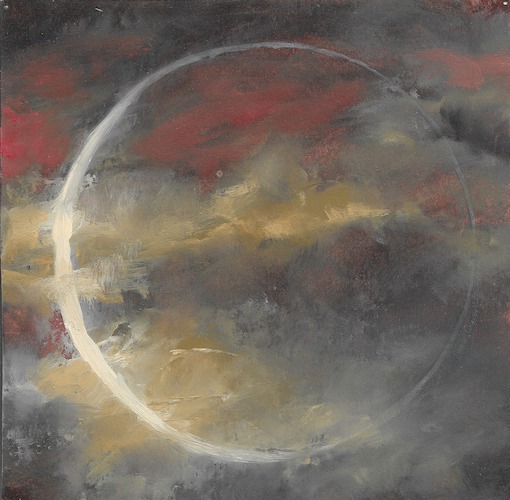 The dramatic power of the album’s first movement is riveting. The second movement, “antumbra“, begins in a slow mournful melody, again backed by the spectral shimmer of synths. The feeling of grief deepens as craggy, doom-laden chords emerge, along with skull-cracking drums, massive growls, and vicious snarls. The music has a vibrant pulse, but seems to wail in despair. And it becomes punishingly heavy, quaking the earth.

Grieving piano keys provide a contrast and a complement, and the music also becomes majestic in its manifestation of anguish, which only deepens the intensity of the pain. Rippling keys and swirling ambient tones lend a feeling of otherworldly mystery, periodically broken by tumultuous eruptions of battering drums and ravaging tremolo’d guitars. And the feeling of the music slowly but surely descends into hopelessness and raging futility.

The song becomes so quiet that you might think it has ended, but it is only transitioning into cosmic drift, again enveloping the listening in a wash of mystical ambient sounds that become increasingly mesmerizing and wondrous, un-tethered from the earth. 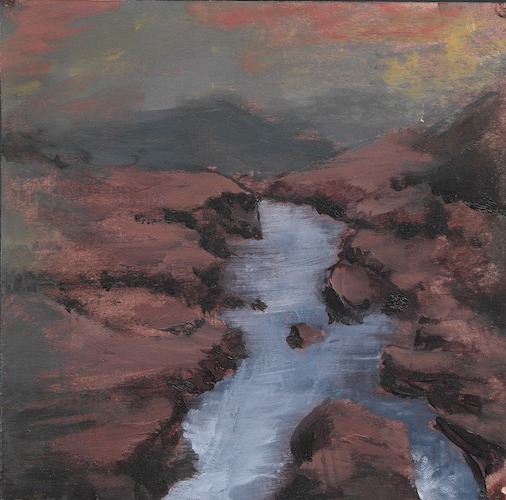 “dis[re]member“, the album’s final movement, is 20 minutes in length. It has a hazy and spellbinding effect in its combination of Rhodes Piano keys, head-nodding drum cadence, and prominent bass tones. It becomes heavier and even more entrancing, thanks to the emergence of a slowly wailing melody and the surprise of male singing that’s soulful and sad. Equally soulful and sad is the saxophone-like solo that follows.

By this point, the music might have reached the most seductive point on the entire album, but (not surprisingly), the music becomes more grief-stricken and harrowing, torquing the tension as the growls, the groaning chords, and the febrile ambient tones reappear. The vocals become searing in their torment, and the overall intensity of the song builds — and then falls away, replaced by uneasy, apparitional electronic vibrations. The piano keys from the opening never completely vanish from the song, and reappear in this ghostly interlude, but the reprieve is brief.

The tortured vocals, craggy chords, and fevered synths resume their emotionally devastating march. The music is saturated in the sounds of grief. There is another interlude in which a pensive but dolorous melody slowly reverberates through a sonic mist, the bass hums, and two men have a dialogue in serious and adamant voices. And of course, the music becomes heavier again, shaking the ground in a ponderous march. The rhythm begins to hammer, the music soars, the voice begins to sing, joined in harmony by a second voice, and the rhythm becomes crushing. It pounds and pounds, and then the music flares into a storm of berserker riffing and deranged howls.

And that frightening experience is what ends the album. 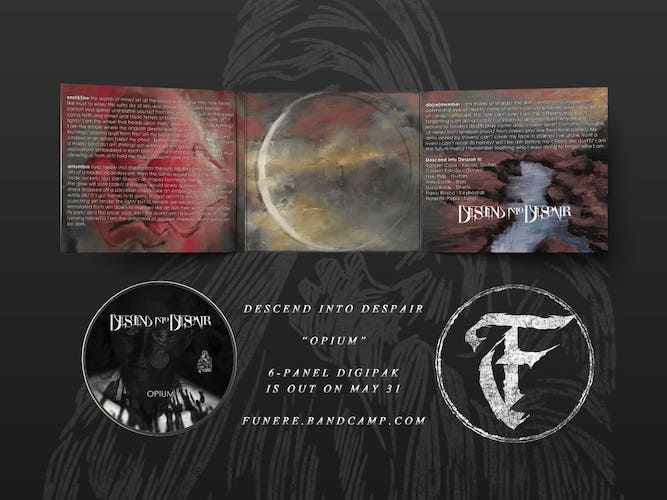 The beautiful artwork you’ve seen above, one piece for each piece of music, was created István Bába. It is featured inside the booklet for the 6-panel digipack CD edition through which Funere will release the album (it is also available digitally).

We hope you enjoy it as much as we have.