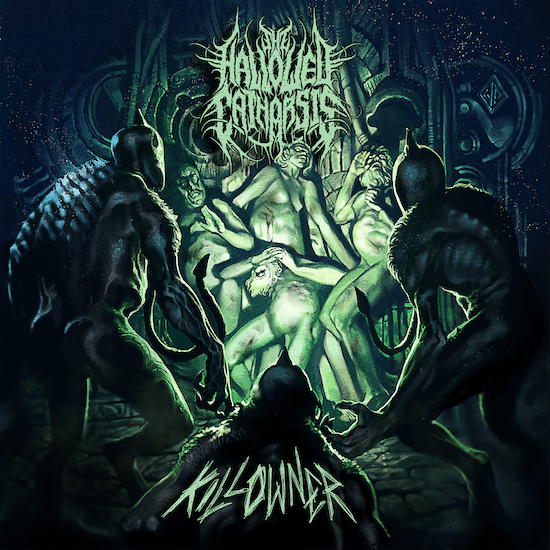 Killowner is the new EP by The Hallowed Catharsis, who make their home in Vancouver, BC. Over the course of six compact songs they tell “the desperate story of the end of life for a mutated human pet of an elitist extraterrestrial master after she has lost her merit and attempts at having her breed prove futile”. Consistent with the narrative concept, the music itself seems extraterrestrial, and it’s a wild thrill-ride from beginning to end.

“Unhinged progressive death metal” is the formulation applied to the music by Lacerated Enemy Records, who will release the EP tomorrow (June 2nd), and you’ll understand why when you hear it. And hear it you can, because we’re presenting a full stream right now. 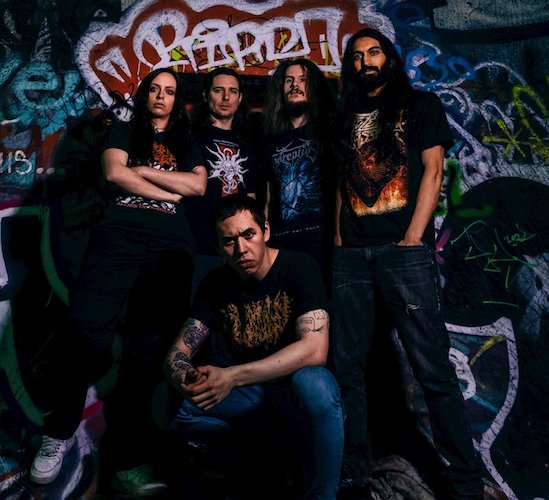 As noted above, the six songs are relatively short, but the band pack each one to the brim, so that each one becomes a blazing carnival ride. They display a penchant for juxtaposing head-hammering grooves and obliterating fusillades, viciously seething chords and displays of fret-leaping athleticism, blaring melodic fanfares and eruptions of insectile frenzy, monstrous gutturals and cauterizing shrieks.

The tracks have a kaleidoscopic quality, unpredictable in their rapidly changing permutations, but every hair-pin turn is sharply executed. Each song is marked by both crafty inventiveness and explosive exuberance as they morph from sinister to savage, from brutalizing to head-spinning. And there are enough genuine prog-metal escapades within the EP (including but not limited to the seductive intro of the EP opener, the solo in the penultimate track, and almost the entirety of the maniacal and mind-bending title song) to justify the inclusion of “progressive” in the band’s genre label.

One might also be tempted to include “technical” in the band’s death-metal genre descriptor (at the risk of turning it into word salad), because this quintet are clearly gifted with high-grade technical chops. But on the other hand, the mad-scientist way they use those skills is more idiosyncratic than the standard blizzard-of-notes-and-beats that characterizes a lot of the “tech death” scene, so it’s probably just as well to leave that adjective out of the description. Regardless of the label, The Hallowed Catharsis are a band to keep a sharp eye on. 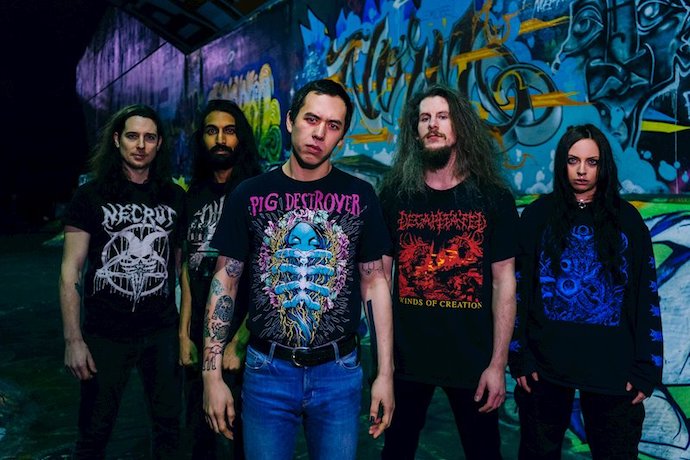 So, with that prelude, buckle your seat belts and get ready to experience the extraterrestrial thrill-ride we promised. The EP is available for order now (CD and digital) along with apparel, via the links below.

3 Responses to “AN NCS EP PREMIERE (AND A REVIEW): THE HALLOWED CATHARSIS — “KILLOWNER””