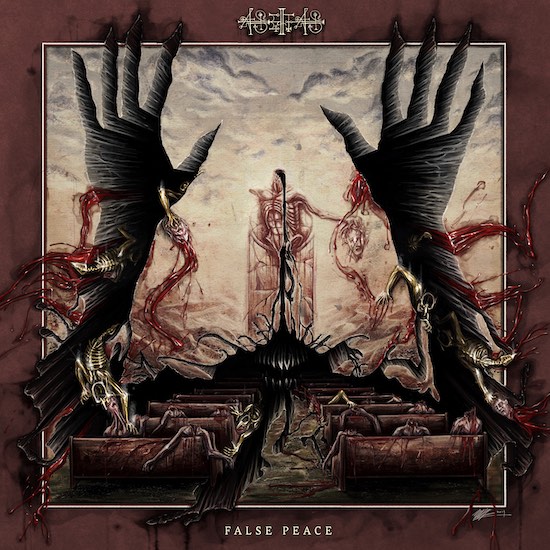 (This is Todd Manning‘s review of the sophomore album by Aseitas from Portland, Oregon, which will be released on July 10 by Lizard Brain Records and features cover art by Noah Cutter Meihoff.)

Is it me or does today’s Extreme Metal scene seem to be overflowing with a sense of epic ambition and experimentalism? Sure, there are those who always seek to return to Metal’s atavistic roots, but one can’t help but be inspired by the aspirations of so many bands nowadays. That being said, how many of these Avant Garde metallers actually succeed in bringing their vision to life? Aseitas not only possesses ambition in spades, but execute their vision perfectly on their sophomore album False Peace, due out on July 10th via Lizard Brain Records.

The group’s sound is extremely varied and wide-ranging, though at its core they tend to focus quite a bit on a mid-paced Death Metal groove, yet screwed and chopped into challenging new configurations. And there is an intense physicality in this approach, like trying to headbang but realizing your entire body is being pulled in multiple directions at once. Blast beats emerge from time to time, but the relentless mid-paced hammering takes center stage. 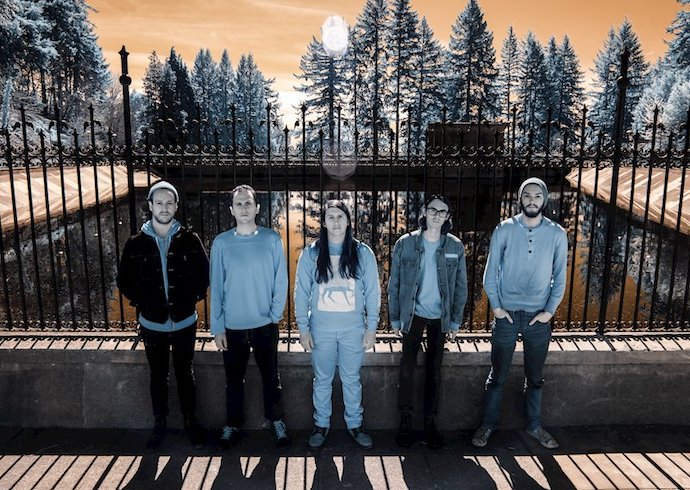 The album opens with the relatively short title track. It walks a fine line between intro and song,  a dirge built on a foundation of distorted drums and noise, more Industrial than Metal. The next three songs focus on strange geometries constructed from the aforementioned mid-paced riffs. These are accentuated with bursts of noise and then surprisingly melodic lead lines.

The third of these songs and the fourth track overall, “House of Turin”, reveals another facet of the group’s sound. About halfway through, they find a Post-Rock section and ride it out, Yet, after a few moments of tranquility, they begin adding more distortion and interrogating the possibilities of the section. Sometimes that same quiet riff gives way to some-kind of Meshuggah-inspired trickery, than it starts to hint at Doom. At one point, the drums become completely unhinged, accenting the riff with a Free Jazz drummer’s sense of adventure.

From there the album just keeps increasing in scope. Death Metal collides with early Dillinger Escape Plan. Sometimes there is a blast beat, in other places more Post-Rock ambiance. “Spite/Sermon” in particular sees the guitar work oscillate between crushing riffs, pure noise, and soaring melodic leads throughout its over fourteen minute runtime. “Blood into Oil” exceeds the ten-minute mark and possesses many of the same elements but closes with an entire piano movement.

The album closes with the two most ambitious songs yet. “Behemoth’s Dance” clocks in at an epic sixteen minutes and shows the group capable of crushing Sludge/Doom in the vein of early Khanate. But of course they don’t remain there. The next riff sounds like the aforementioned Dillinger doing a cover of Neurosis and eventually finding another section that sounds like Meshuggah being played too slow on a turntable. And of course there’s a splotch of grind, more Post-Rock, and Ambient yet to come.

After all that, “Pieces” brings the album to its conclusion. Like the opening track, this bookend clocks in at under three minutes, but instead of bruising Industrial noise, “Pieces” is a tranquil bit of Jazz Fusion, bringing to mind John McLaughlin or some of Bill Laswell’s Dub projects.

False Peace lasts more than an hour and ten minutes, and before I listened to it, I thought I’d be holding the album’s length against it. However, after I dived into this beast I realized that in order for Aseitas to achieve their ambitious vision, it had to be this long. Trying to cram that many ideas into a shorter runtime would’ve made the flow disjointed. Instead, the album is captivating and the time passes quickly. Before I knew it, I was hitting play again.