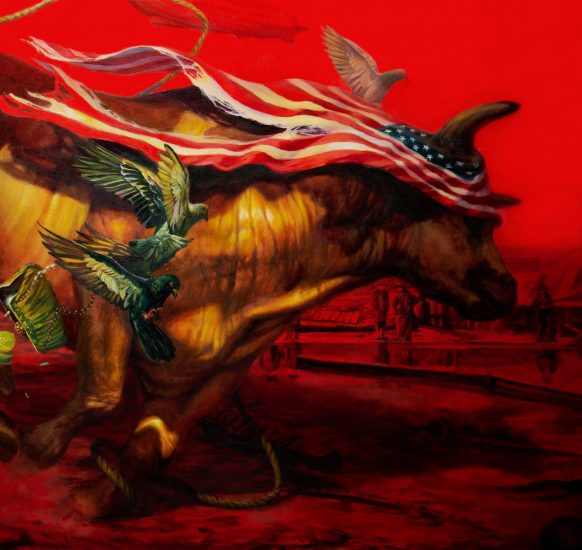 (This is Andy Synn‘s review of the new album by the Ontario, Canada, metal band Protest the Hero, which will be released on June 18th.)

Necessity, as they say, is the mother of invention. While adversity… adversity is a son of a bitch.

Progressive Tech-Metal punks Protest the Hero are all too familiar with adversity, as the years since the band’s last release, 2016’s piecemeal (but promising) EP Pacific Myth, have been riddled with ups and downs, setbacks and delays, and one extremely worrying period where it looked like singer Rody Walker might have to hang up the microphone for good.

But, wouldn’t you know it, the band’s dedication and bloody-minded perseverance has paid off handsomely, as you’re all about to discover. 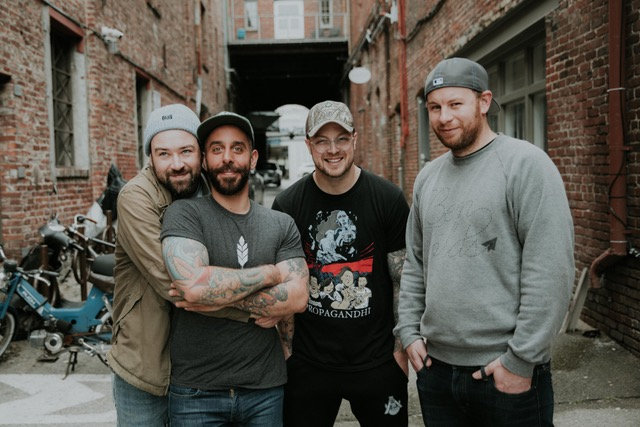 In simple terms, Palimpsest is the sound of a band renewed and reinvigorated, combining the epic vibe of Fortress (still, for many, the band’s magnum opus), with the more lithe and limber, shoot-for-the-moon, approach of their debut album, Kezia.

That being said, don’t go thinking that this new record is simply a throwback to the group’s early years (both musically and thematically nothing could be further from the truth), as it definitely incorporates all the lessons which they learned making Scurrilous and Volition too, as well as some unexpected new tricks and twists.

As a matter of fact, one of the big surprises (from my perspective anyway) is how audaciously Power Metal-esque things get across the course of these ten tracks (plus three intricate instrumental interludes).

Songs like gloriously OTT opener “The Migrant Mother” and mid-album melodic masterpiece “Reverie”, for example, are more Blind Guardian than Between the Buried and Me, and the combination of the band’s signature Tech-Prog shreddery with their newly-realised penchant for cinematic synth embellishments helps push this album across the line from unashamedly ostentatious to utterly majestic.

At the same time, however, several of these tracks (“The Fireside”, “Gardenias”) find the ol’ Canuckleheads at the punkiest, and punchiest, they’ve been since before any of them could grow a proper beard, throwing in some well-timed “woah-ohs” and hard-hitting harsh vocals to complement Walker’s utterly stunning, instantly recognisable delivery, which – while it may not quite hit the same ludicrous high notes as before – is arguably more energetic, more engaging, and more emotional than ever.

Of course, PtH have never been shy about their love of mixing and matching different styles in ways which, in principle, seem patently ridiculous, but they’ve really taken it to a whole new level this time around, as demonstrated by the thrilling fretboard wizardry and bouncing bass work which underpin gen(r)e-splicing, boundary-smashing tracks like the Tech-Metalcore mayhem of “Soliloquy” or reckless Prog-Pop-Punk-meets-Hardcore-Hair Metal anthem “All Hands”.

Another thing which Protest the Hero have never been shy about is injecting politics into their music, almost always couched in some creative and evocative imagery courtesy of Walker’s keen ear for whip-smart phrasing and razor-sharp wordplay, and Palimsest is no different in this regard, addressing the ways in which our history is frequently written and constructed, then re-written and re-constructed, so that it doesn’t necessarily reflect the reality of what really happened.

Heck, in the first three songs alone the band delve into how the promise of a better life for migrant workers too often turns out to be an empty one (“The Migrant Mother”), retell the story of Amelia Earhart while meditating on the ways in which history both valorises and minimises women in equal measure (“The Canary”), and use our fragmented collective knowledge of the Hindenburg disaster (“From the Sky”) to demonstrate how even pictures don’t always tell the full story!

And while I’m sure it’s entirely possible to enjoy this album without engaging with the message behind the music, to do so would be to miss out on a big part of what makes this album great.

Speaking of… climactic anthem “Rivet” really does exemplify just how vital the musical and lyrical interplay is to Palimpsest‘s ultimate success.

It takes the band’s patented blend of soaring guitar heroics, shamelessly infectious pop-punk melodies, and subtle progressive panache and incorporates lines from Depression-era classic “Brother Can You Spare A Dime?” while also co-opting the modern-day MAGA rallying cry (“Lets! Make! America great again!”) to broadcast an alternative message, one where true greatness comes not from looking back to a gilded “golden” age, but from looking forwards to a world built on invention, common sense and, above all, compassion.

It’s clever, it’s catchy, it’s cunningly-wrought and just a little bit cheeky, and it’s a perfect ending for what is, by leaps and bounds, the best record of the band’s career.

Who would have predicted that the quintessential “Great American Album” of 2020 would come courtesy of a bunch of genre-b(l)ending, border-crossing Canadian nerds?

Not me, certainly, but I really wouldn’t be surprised if this one goes down in the history books… for all the right reasons.

4 Responses to “PROTEST THE HERO: “PALIMPSEST””