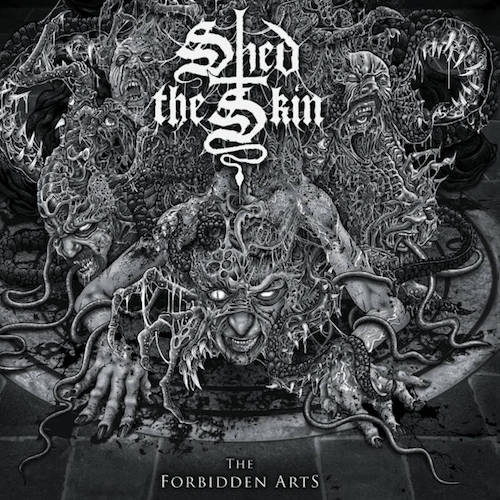 Regardless of how completely awful the current situation may be on almost too many levels to count, any year that includes a new album by Shed the Skin is a good year, and any day that gives us another chance to premiere their music is going to be a devilishly joyful one regardless of how miserable it might have been otherwise. It should also be a joy for all fans of evil but electrifying death metal.

We’ve been helping to spread the word about Shed the Skin for many years, but hopefully by now they don’t really need any more help. With a veteran line-up drawn from a host of well-known bands, they were able to hit the ground running with their 2014 EP Rebirth Through Brimstone and powered through to even greater acclaim with their first two albums, 2016’s Harrowing Faith and 2018’s We of Scorn. And now their steadfast label Hells Headbangers is poised to release their third album, The Forbidden Arts, on June 26th, and that’s what we’re giving you the chance to hear in full right now. 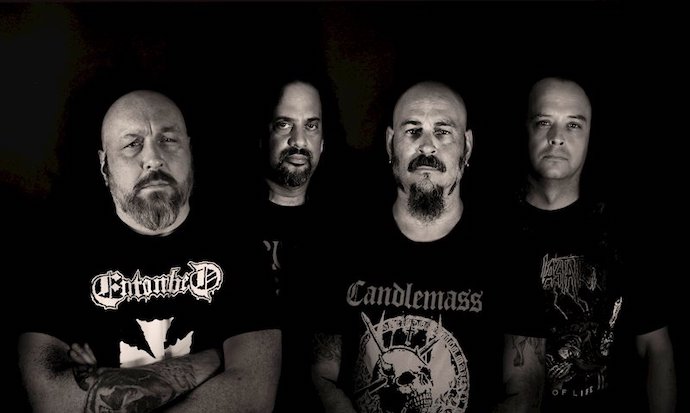 We’ve told the tale of this band’s origins before, but for those who aren’t familiar with it, the genesis of Shed the Skin happened when drummer Kyle Severn (Incantation, Acheron) and guitarist Matt Sorg (Ringworm, Blood of Christ) played together in a tribute to Cleveland’s Blood of Christ at a memorial show for their deceased friend Tom Rojack (notably, Blood of Christ’s 1993 promo EP included the song “Shed the Skin”), and that led them to forge ahead by eventually recruiting the rest of the band’s impressive line-up, vocalist/guitarist Ash Thomas (Vladimirs, Faithxtractor) and bassist Ed Stephens (Ringworm), all of them dedicated to creating Satanic old-school death metal.

There have been other constants in the band’s activity besides the alliance with Hells HEadbangers. Since their first 7″, the records (including the new one) have been recorded in Cleveland and mastered by the great Dan Swanö at Unisound. And they’ve turned again to James Bulloch for the cover art of the new record and to Incantation’s Chuck Sherwood for the blasphemous lyrics.

The Forbidden Arts is a new testament to the collective talent of all these people. It delivers 11 new tracks plus a hidden cover from Matt Sorg’s 1990s band From the Depths, a tribute to that band’s original vocalist, Jim Konya (RIP). Shed the Skin kick off their new record with the eerie, shivering synths that open “Skeletal Firestorm”, but that song soon becomes a juggernaut battering ram, racing and ravaging in a flurry of cutting riffs and clobbering drums, segmented by start-stop bursts and slowing into a gut-slugging, neck-ruining chug-fest followed by slitherings of bleak, diseased melody. Ash Thomas‘s vocals are equally ferocious, a frightening cavalcade of belly-deep barbaric growls, ghastly gurgling, and demented snarls and shrieks. And when the band burst into a final surge, it’s embellished by a swirling, fret-burning solo that turns the dial even further up on the song’s voltage levels.

That opening track displays many of the hallmarks of the album as a whole — the absolute ferocity of the vocals; the skull-plundering, spine-shaking force of the rhythm section; the scathing savagery of the riffs (and the occasional integration of Bolt Thrower-ish chugging); off-the-hook soloing that puts on one fireworks display after another; and the dynamism of the pacing and the drum- and bass-work.

The dynamic character of the music is persistent, as is the interweaving of mood-moving melodies. But although almost none of the songs stays in the same speed zone from beginning to end, some are more riotous overall and some more gloomy and ghastly. Among the generally faster songs, “Archons of the Final Creation” is brazen and exultant, laced with freakish, queasy arpeggios (though it devolves into a dragging crawl whose melody sounds crushingly hopeless), and “Master of Thralls” blends together jagged, skittering, fast-jabbing riffage and moaning melodic misery, while “Glorified In Bloodsmoke” is a turbocharged barrage of piston-driven momentum, rabid guitar swarming, and berserker soloing (though it also drops into a soul-sucking crawl).

On the other hand, some of the tracks are more dominantly mid-paced, including the gruesome, sadistic ravages of “The Moors, The Madness” (which becomes a full-bore romp), the bleak yet exotic grandeur and pile-driving grooves of “Trow of Tragedy”, and the horrifying wretchedness and jolting assaults of “Necromantic Wellspring” (which briefly explodes into Grade A mosh-pit fuel).

The band don’t run out of gas as the album goes deeper into the track list. Indeed, the latter half of the album is home to some of the record’s highlights, including “The Laundress”, a choking blanket of gloom and pestilence segmented by bursts of percussive explosiveness and scintillating flashes of lead-guitar melody (and it’s home to a mesmerizing guitar solo), as well as its immediate follower, “Black Bile of Ceres”, whose momentous grooves, sorcerous, darting riffs, and menacing yet ecstatic crescendo create sensations of infernal eminence and esoteric spellcasting, and the terrible and tragic yet defiant majesty of “Veins of Perdition”, the album’s longest and most enthralling song, which sounds like the march of a rebel king to the gallows, bowed but not broken.

Closing with the scampering mayhem and fiery intensity of “Speculum In Blood”, which amalgamates nail-gunning riffs and sweeping chords, eye-popping soloing and bullet-spitting drums, Shed the Skin finish off yet another triumph in a discography that was already uniformly impressive.

To repeat, The Forbidden Arts will be released on June 26th, in a variety of formats, by Hells Headbangers. It’s available for pre-order now.

2 Responses to “AN NCS ALBUM PREMIERE (AND A REVIEW): SHED THE SKIN — “THE FORBIDDEN ARTS””