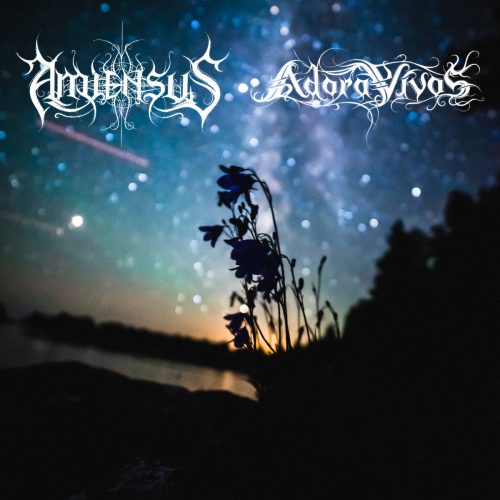 A beautiful and ravishing split that includes not only a great Amiensus song but also the magnificent return of Adora Vivos after a 7-year silence, a band that includes former Amiensus multi-instrumentalist J. Waller (on both Restoration and Ascension) and Amiensus vocalist/guitarist James Benson. This one won’t leave you the same way it found you.

The resurgence of one of the earliest American black metal bands, whose mastermind Michael Ford (aka Akhtya Nachttoter) is a serious student of, and writer about, Luciferianism and occultism. He and his allies here have crafted a deeply sinister and magically magisterial hybrid of dark ambient and black metal music that succeeds in creating a frighteningly vampyric atmosphere.

Finnish doom/death of a very high order, featuring members of Desolate Shrine and Dark Buddha Rising. In your mind’s eye, you will see the wonder of stars falling from the sky and envision the calamitous tragedy of life in agony as the the earth turns to ice.

To borrow from a review at Last Rites, “This is driving, impassioned, sweeping, melodic black metal that still retains an edge of both fervor and ferocity”, with a range of expressive vocal styles and beguiling acoustic accents.

Unmistakably malevolent and bone-smashing black/death metal, but set apart by the vocals and by the strange, grand, and narcotic seductiveness of the melodies. Music that’s not only murderous, marauding, and neck-ruining but also exotic.

I’ve been meaning to write about this Sicilian black metal EP for almost a month. A combination of full-throttle electrification and grievous yet gripping melody, with an overarching air of brazen grandeur.

If you follow black metal you’ve undoubtedly read numerous opinions proclaiming this one of the best black metal albums of 2020, and a cinch to make many year-end lists. Believe it. This is a stunner — wintry and ravaging and also often transcendent in its icy magnificence. At roughly two hours long, it’s also a behemoth, maybe too daunting to listen to repeatedly all the way through, but packed with so many gems that returning to it for at least as much time as you can spare becomes an irresistible desire.

A blackened amalgam of death metal, crust, and grind with absolutely massive chainsaw-toned riffs, berserker vocals, a rhythm section that punches through your guts and out the other side, and an array of bleak and barren melodies that mercilessly dig under your skin. Visceral, spine-shaking physical power married to seismic emotional disturbances.

“In theme with prior Utzalu releases, The Grobian Fall tells the narrative of one’s descent as the fool – the one who believes to have fallen from grace yet never was accepted, to begin with. The imposter whose delusion leads only to more lewd despair and pathetic turmoil”. And what an interesting and twisted tale this is, which will come as no surprise to those who’ve experienced Utzalu‘s previous creations.

The sound is raw, the riffs are immediately addictive, the vocals are a manifestation of unhinged malice and wretchedness. You could think of this as a marriage of mean-streets punk and depressive black metal, celebrated with hallucinogens instead of cake.