We’ve been following the impressive progress of the Swedish black metal band Ov Shadows since its formation in 2016 by former members of Waning, one of whom is also a member of Obitus (a band who’ve also received significant attention at our site over the years). Since that inception Ov Shadows have released a debut EP (Monologues) and a first album (The Darkness Between Stars), both of which demonstrated multi-faceted talents, with music capable of reaching heights of both incendiary violence and heart-swelling grandeur as well as descending into depths of endless suffering.

It has thus been welcome news to learn that Hypnotic Dirge Records will release a second album by these formidable Swedes. The name of the album is I Djävulens Avbild (In the Devil’s Image), with a release date of August 14th. It proves again the power of the band to mount punishing, near-overpowering assaults on the senses while also, true to their name, wrapping the listener in shrouds of darkening shadow. 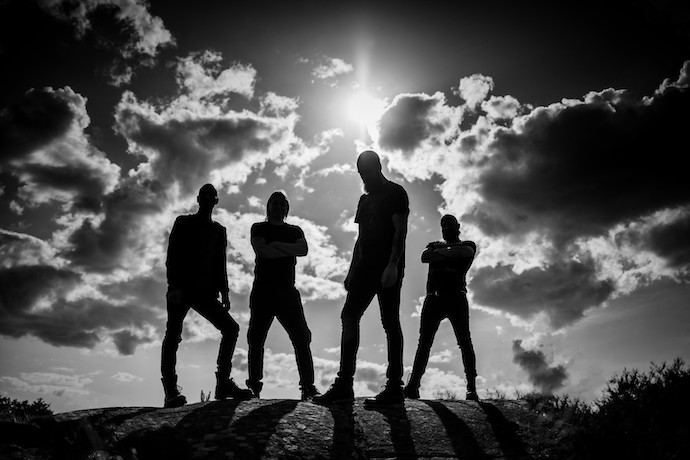 The surging momentum of the album, however, is not relentless. There are times when the band change the flow in ways that become entrancing, and emotionally fracturing, and in the first song premiere from the album that we’re presenting today they’ve done that, creating an intensely moving and indelibly memorable lament.

The title of the song is “Under Dödens Vingar” (Under the Wings of Death). Immediately, the music surrounds us with dense waves of tremolo’d riffing accompanied by enormous drum detonations and heavyweight bass pulsations. The music has a majestic but sorrowing resonance that immerses the senses, its wrenching gloom shredded by caustic shrieks and increasingly electrifying drum patterns.

As the vibrating chords rise and fall, their penetrating sounds seem to become manifestations of mourning and weeping, mounting in intensity and growing even more powerfully mesmerizing, with that effect counter-balanced by carefully-chosen dynamic changes in the drumming, whose nuances are well-worth focusing on in subsequent listens. The music really is spellbinding, and as it evolves, it gloriously soars in its expressions of grief-stricken agony, even as the blast-furnace vocals become a flame of pain. It’s an all-encompassing experience, wrapping us in its dark embrace, subsuming us in its lament, carrying us away in its crescendo beneath wings of death.

I Djävulens Avbild was recorded, mixed, and mastered by Ov Shadows, and the album art was made by Mister snöpuls.

Pre-orders for the album on CD, plus merch, will go live on Friday, July 17th, and on that day you’ll be able to make your purchases here: