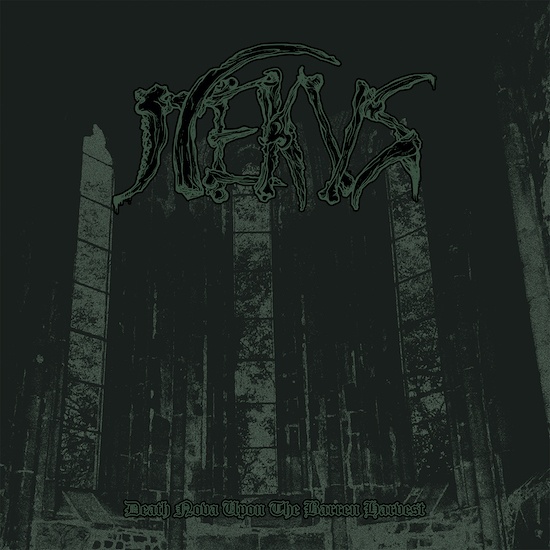 Death Nova Upon the Barren Harvest is an evocative title. The words alone suggest a desolate experience fraught with menace and morbidity, and a portrayal of crushing despair beneath the incandescence of the sweeping scythe that eventually cuts us all down. The words alone provide an inkling of what the music might bring, but the sounds prove to be even more terrifying and soul-crushing, and they also give vivid meaning to the idea of a “death nova”.

That title is the name chosen by the German death-dealers Nekus for their debut EP. Although it’s this band’s first recorded work, it’s no surprise that Blood Harvest Records seized upon it and is giving it a lavish release that includes a full panoply of physical editions — CD, cassette tape, and vinyl. The CD and cassette versions are set for release on July 17th, while the vinyl is set for August 28th. Now you’ll learn for yourselves why the label is backing this so hard. 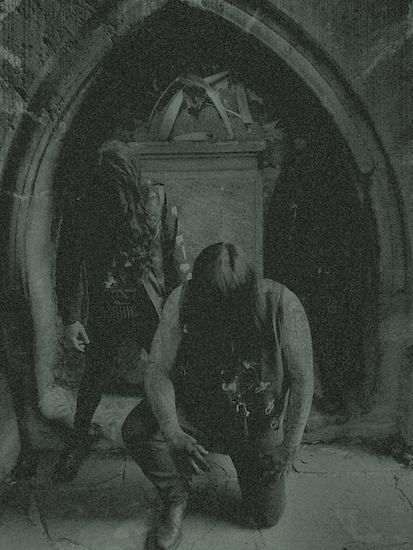 The formulation of death metal embraced by Nekus is cavernous and corrosive, an ugly and all-enveloping assault that seems spawned from forces within the life-sucking void of our worst nightmares. Their music does a very effective job of capturing primal fears of death and the supernatural. It’s brutish and diseased, but also creates an atmosphere of otherworldly terror. It brings into being the presence of titanic other-dimensional powers, but also radiates very human emotions, even though those emotions are the worst kinds of anguish. And last, but certainly not least, it often becomes entrancing — which is quite an achievement for music whose desolating impact is so ruthlessly pulverizing.

The opening sequence of “Devouring Mills” vividly demonstrates without delay just how unnerving this EP is going to be. The low-slung, roiling riffing is unmistakably dismal, and the booming drums have a tribal aura. The drummer segues into a metronomic pounding as ghastly roaring vocals join the fray like a ferocious shaman. As the toxic timbre of the guitars rises and falls, the sound is both cruel and frenzied, cold and savage. Together with the drumming, they create a primal atmosphere, as if conjuring the root fears we share with our most distant ancestors. Eventually, the drumming slows and the chords groan in long, slow radiations that channel a feeling of crushing dread and loss.

“Putrid Harvester” is a striking combination of berserker chaos and insidious, sickening rot — manifesting the torment of tortured souls and the degradation of the spirit, a feeling amplified by the vocalist when he flares into terrifying howls and maniacal screams. But this song reveals another dimension of Nekus‘ abominable musical creativity. Serpentine strands of melody slither through these dense, pulverizing sounds in ways that seem stricken with grief and despair. That melody is a shivering experience, and sometimes the guitars resonate like the ringing of glass bells, creating an unearthly, hallucinatory atmosphere, but they are also strangely entrancing and become powerfully addictive.

The almost stately drum rhythms, mutated pealing chords, and cavernous roars of “Necromancer’s Death Chant” quickly create a feeling of necrotic grandeur. The music heaves and moans, and what seemed stately becomes a gangrenous crawl, trailing ichor and gobs of infested flesh. The music morphs. The lead guitar flickers in a semblance of crazed ecstasy, and the drumming rumbles like an avalanche, but in the low end the music continues to reveal the presence of some gruesome, creeping, leviathan beast. Maggots swarm within the song, and it reveals apocalyptic visions as well.

As the EP’s longest song, “Dagger Of The Corrupter” also proves to be the most diverse in its blood-freezing sensations. Piston-pumping drumwork pounds the pulse and boiling, distorted riffing conjures visions of frantic feasting by famished ghouls. Deep drilling tones build feelings of tension and despair, and their slow cascade also integrates feelings of utter hopelessness. When the drumming slows into measured detonations, eerie ringing tonalities surface along with protracted wails, like glimpses of shimmering ghosts in deep lightless chasms, beckoning us with pale, evanescing hands. The music once again becomes entrancing, even though the feeling is one of severe peril — a peril that becomes reality instead of threat when the drumming grows riotous,, when the riffing once again surges into a grim boiling mass of putrefaction, when the vocalist expels sounds of howling wretchedness. 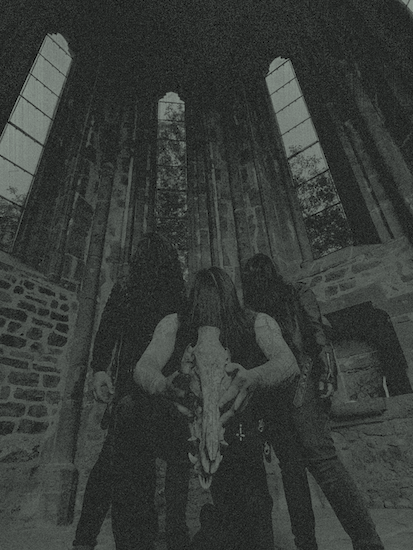 Those are of course only one listener’s impressions. You can easily form your own because you can now listen to the EP straight through. And if you like what you hear, you can choose among all those physical editions via the links below.

3 Responses to “AN NCS PREMIERE (AND A REVIEW): NEKUS — “DEATH NOVA UPON THE BARREN HARVEST””