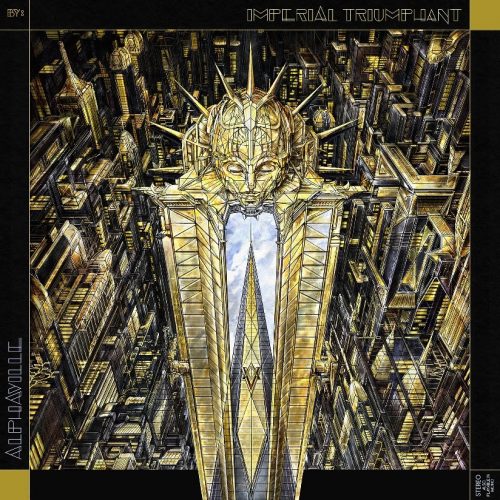 (Here’s Andy Synn‘s review of Imperial Triumphant‘s new album, which will be released on July 31st by Century Media Records.)

There is absolutely no doubt in my mind that Vile Luxury, the career-defining 2018 release from Avant-Black trio Imperial Triumphant, is a modern-day classic.

Unorthodox, unconventional, and uncompromising to a fault, its fusion of moody soundscapes, abrasive, blackened belligerence, and free-wheeling, jazzed-up instrumentation sounded like nothing else at the time, and still has very few peers or rivals today.

Such success, however, can easily be an albatross, a noose, a shackle, and it raises the question – how does any band, any artist, respond, react to, or reject, the pressure to follow up such a magnum opus?

The answer of course, is that they go bigger, go bolder… they go back in time and back to the future… they go to Alphaville. 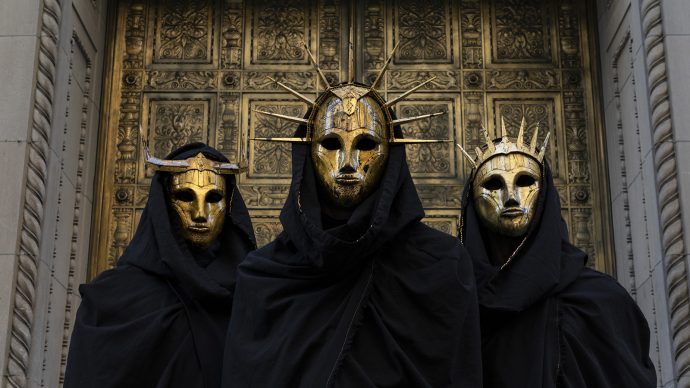 As perhaps needs to be made clear, however, “Alphaville” is not a real place.

It’s a conceptual space, a retro-futuristic glimpse of tomorrow viewed through the anachronistic lens of yesterday, inspired as much by the works of Fritz Lang and Jean-Luc Godard (with whose film the album shares a title, and possibly more) as it is by the divergent visions – utopian, dystopian, and everything in between – set down by Huxley, Heinlein, Orwell, and the like.

Unsurprisingly, the music on Alphaville reflects this conceptual contradiction. Still as indebted to the more experimental works of Coleman and Coltrane as it is inspired by Gorguts or Pesilence, yet at the same time attempting to create something beyond what any of them could have predicted, it paints a picture of a parallel future (and a present) both utterly unrecognisable yet unnervingly familiar.

Unlike its predecessor, however, the picture it paints is not just tied to a single place and time. Instead it forms an abstract, dreamlike, image – all sound and fury, signifying… something – of a city that is at once everywhere and nowhere, a place none of us have ever visited, but which we all know far too well.

To Imperial Triumphant, it seems, we are all citizens of “Alphaville”, each of us united and afflicted by the same shared psychosis.

Intriguingly, this actually makes Alphaville a more universal, and dare I say accessible, album than Vile Luxury. Although it’s still far from an easy listening experience, with numbers like “Excelsior” and the madcap title-track constantly teetering right on the edge of total sensory overload.

But, beneath all the expected chaos and confusion, there’s still a sharp-eyed method to the band’s madness, particularly in the ways in which they deploy teasing strands of melody and ambience to express this universal sense of urban ennui and post-atomic stress.

In fact, perhaps the most surprising thing about this album, beyond how much less “blackened” it is than its predecessor (those early Gorguts and Pestilence references were made for a reason), is how unusually and eccentrically “melodic” (to stretch the term to its absolute limit) so many of these songs are underneath all the grit and grime, from the brooding slow-burn of “City Swine” and the pulpy, pulsing bass-lines of “Atomic Age” to the eerie ambient undercurrents and overtones of “The Greater Good”.

Of course, the type of melody we’re talking about is not the soaring, soothing kind of melody that charms the ear and calms the soul. It’s the morbid melody of rot and rust. The hellish harmony of cracked pavements and crumbling brickwork. The buzzing background noise of a city’s neon-lit half-life, creeping its way into your homes, and into your bones day after day after day… 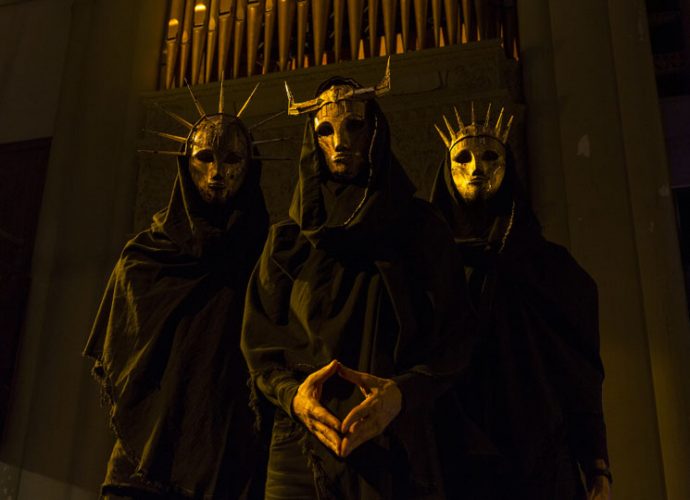 Perhaps the smartest thing Imperial Triumphant have ever done is choosing not to try to recapture the sheer shock and outrage, the sense of “danger” (for lack of a better word), which surrounded the release of Vile Luxury.

Instead, what they’ve created here is something which takes that album not as an end point to be reached, but a foundation upon which to build something new, whose ultimate shape and form is impossible to predict, except perhaps in hindsight.

As the opening song says… behold the future… it may not be quite what you expect.