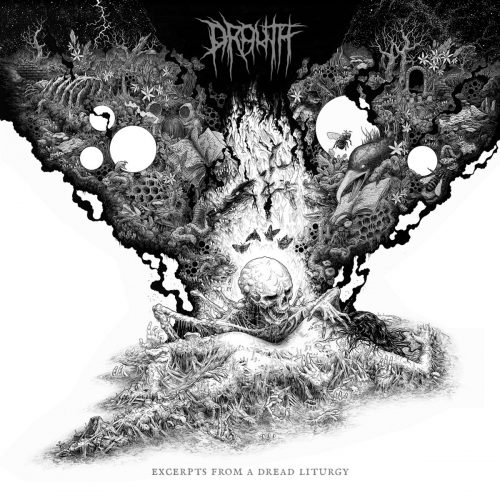 (July 31 is the date set by Translation Loss Records for the release of the new album by Portland, Oregon’s Drouth, and here we have Andy Synn‘s review.)

It looks like this week is going to be (another) one dedicated to the underdogs.

After all, I’ve already written glowingly about Question and their killer new album, which could well end up on a few “Album of the Year” lists come December, and I’m almost done putting together this month’s edition of The Synn Report, which covers another band whose latest (but largely unheralded) record also deserves a lot more praise and attention.

Then there’s today’s feature, covering the second album from Portland-based blast-fiends Drouth, which looks set to finally (and firmly) put them on the Black Metal map. 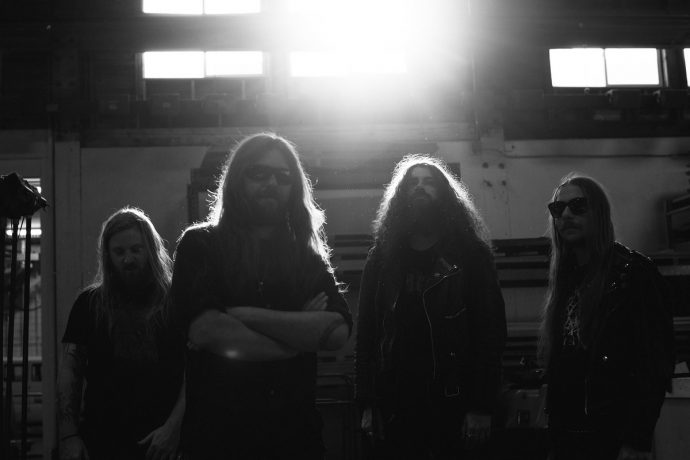 Over the course of just over forty minutes, Excerpts from a Dread Liturgy delivers a bombastic bombardment of taut, tremolo-driven riffs, rippling, rough-hewn melodies, and abrasive, acid-scarred vocals, which rarely shows much in the way of moderation or restraint.

That’s not to say it’s without nuance or subtlety, however. In fact, if anything, the record’s occasional moments of (relative) calm only serve to make this five-song metallic maelstrom even stronger.

Opener “A Drowning In Sunlight”, for example, batters and blasts, gallops and grooves, with (almost) unrelenting fire-and-brimstone fury, but it’s the moody, mid-song atmospheric interlude – bleak and baleful and brimming with inchoate darkness – which ties the whole thing together and makes it more than the mere sum of its punishing parts.

Similarly the sinister slow-burn which opens “O Time Thy Pyramids” creates a lingering and deep-rooted tension between the song’s brooding beginning and its frenzied, blast-beaten finale, while the elegant instrumental outro to “A Repulsive Act Shrouded In Flesh” serves as the perfect counterpoint to the track’s whirling, dervish-like assault on the senses.

Of course, while these various moments of tortured tranquillity and simmering dread undoubtedly play a vital role in enhancing the album’s overall impact, the sheer intensity of the band’s performance here – every ferocious fusillade of munitions-grade blastbeats, every trip-wire tremolo run, every ragged riff and jagged, glass-gargling shriek – simply cannot be denied.

As a matter of fact, while Drouth’s sound has, in the past at least, often seen them compared to their countrymen in Uada (and, I’ll admit, the massive, melody-infused riff-fest of “An Apiarist” still continues to bear this out, to an extent), the increased intensity and aggression displayed here makes this comparison less accurate by the moment, and in truth Excerpts… has more in common with the primal energy of Dawn Ray’d or the vicious vitality of dearly-departed Texan trio Averse Sefira than it does anything produced by the band’s more melodically-inclined cousins.

If there’s one criticism I would like to raise, it’s that the abrupt ending to “A Crown of Asphodels” makes for a slightly awkward end to the record as a whole, and the band perhaps would have been better advised to switch things round so that the previously mentioned “A Repulsive Act…” served as the album’s true climax, but ultimately that’s a minor issue of sequencing rather than any question of the overall quality of the music itself.

Look, we all know that standing out from the crowd is always hard. Especially if you’re trying to play a form of Black Metal that remains fervently faithful to the traditions of the genre, without being defined or limited by them.

But, make no mistake about it, Drouth have certainly made a big statement about who they are with this album. And even if they haven’t quite ascended to the upper echelons just yet, history may well one day show that the release of Excerpts from a Dread Liturgy marked the point where the band made the step up from followers to future leaders.

2 Responses to “DROUTH: “EXCERPTS FROM A DREAD LITURGY””