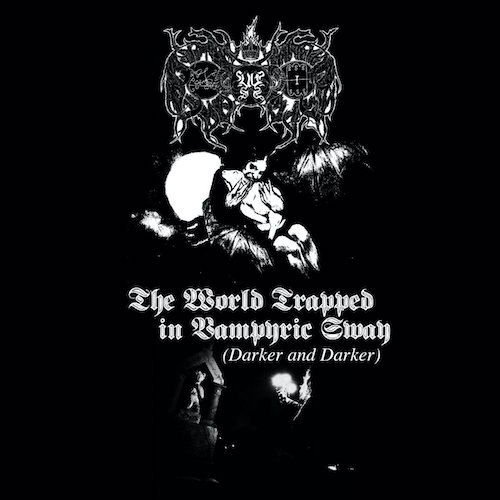 Vampiric lore, especially in popular culture, has been dichotomous. On the one hand, vampires are depicted as ruthless predators capable of bestial savagery, rending human flesh in feeding frenzies of seemingly insatiable blood lust. On the other hand, there has also been a persistent aspect of dangerous romance in the canon, especially in more modern times — a side of the undead that is magical and seductive (if no less lethal), perhaps a remnant of humanity and perhaps merely a different stratagem for successful predation.

Of course, there are more aspects than these two which are revealed through the many centuries of vampiric legend and art, but these two may come to mind first in listening to the song we’re premiering today from the new third album by the Massachusetts black metal band Unholy Vampyric Slaughter Sect. 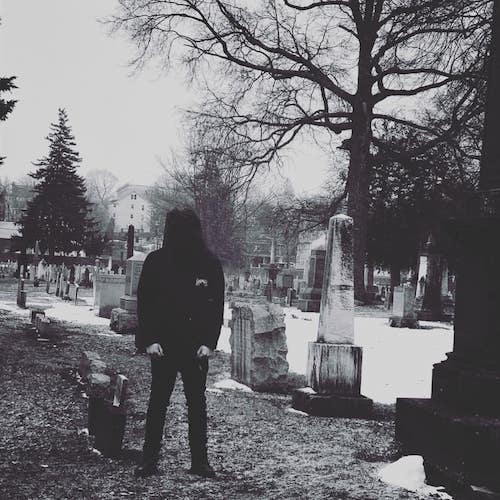 The name of the album is The World Trapped in Vampyric Sway (Darker and Darker), and it will be released by Crown and Throne Ltd. The evocative name of this new song is “Forced Genuflection on Adoring Gored Knees“. And as that title might suggest, there is something about the music which raises images of adoration, dominance, terror, and blood.

No warning is given before the song explodes in an eruption of raw black metal — an assault of searing riffs, blasting drums, and lunatic shrieking. As violent as those sounds are, melodies move in slow waves through the storming chords, melodies that channel a mixture of sensations — feelings of melancholy, of poisoned longing, and of incipient mental fracturing. There’s a queasy and uneasy feeling in the melodies, but they still seem (at least to these ears) to portray that aspect of dangerous romanticism mentioned above, along with terrorizing frenzy.

But the song makes a course change. The drumming shifts to a neck-cracking rock cadence, and in tandem with that the music blares in a grand fever and chugs in powerfully skull-busting fashion, and the vocals become a lycanthropic howl. The bass, which has always been a noticeable presence, stands out more prominently, and adds to the thrusting, lusting, carnal potency of the song’s back half.

Unholy Vampyric Slaughter Sect expresses this philosophy by way of introduction to the new record:

Crown and Throne Ltd. will release The World Trapped in Vampyric Sway (Darker and Darker) on vinyl LP and cassette tape formats. The tape version (as well as digital) will be released on August 21st, while the vinyl will be released on September 4th.