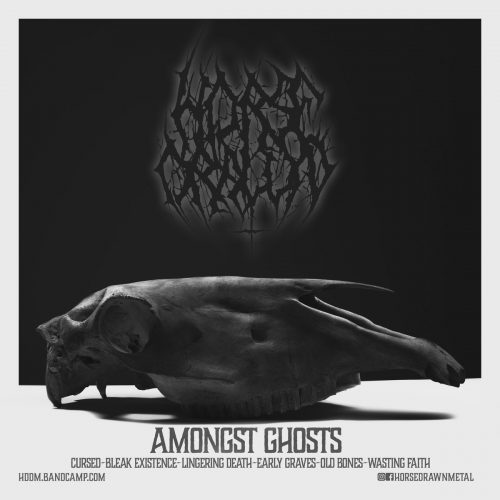 We’ve already seen abundant evidence that pandemic shutdowns and searing economic calamity haven’t crushed musical creativity. Those two ruthless giant hands may be doing their best to choke the life from artists (along with the rest of us), but they haven’t succeeded. In fact, rather than becoming numb or being struck dumb, many musicians have continued to record new music, and for many of those the work has itself become a mental and emotional survival mechanism. Horse Drawn is a case in point.

This Ohio-based duo — multi-instrumentalist Jonny Doyle (Coldfells) and vocalist Bryce Seditz (Plaguewielder) — haven’t been prolific, but their output under the Horse Drawn name has for this writer become must-listen material. While in the midst of the giant mess we all now find ourselves in, they’ve recorded a new EP named Amongst Ghosts that’s being released today, and we are happily spreading the word through this premiere. 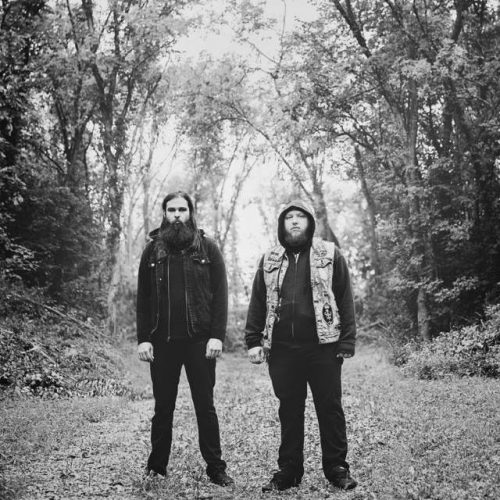 The new EP includes six songs, two of which are re-done/updated versions of tracks from their 2012 EP No Light. If you look at Horse Drawn‘s Metal-Archives page you’ll see their music described as black metal, sludge, and rock, and those are fair references, but they’re not exhaustive. With respect to this new EP you could also add classic heavy metal, blues, and maybe even a mental image of a brass band at a New Orleans street funeral (even though there’s no brass in this music) — or at least that’s how I hear it.

The music rips and rages, and it’s unmistakably dark and often crushingly desolate, but it’s also glorious and resilient. Horse Drawn‘s success in creating all these sensations in ways that don’t seem jarring, but to the contrary become quite memorable, is a testament to the talents on display here.

Bryce Seditz‘s vocals are so insanely intense that even without regard to the music you’d never feel any sense of ease in listening to the EP, even in its most resurgent moments. You get a strong dose of his livid howls and maddened screams in the opener, “Cursed“, along with hammering drums and waves of seething riffage, segmented by stomping chords and thumping low-end rhythms. The music straddles a line between vicious and distraught, but with a kind of merciless grandeur emanating from it.

Fast and ferocious, “Bleak Existence” is a full-on assault of blasting drums and barbaric riffage that creates sensations of violence and grim menace, with vocals that are as unhinged as the music, holding nothing back.

Blasting drums assault the ears again in “Lingering Death“, but there’s also a groaning weight in the music at the outset and again near the end, creating a feeling that’s beleaguered and almost hopeless. Yet between those episodes of calamitous oppressiveness you’ll encounter darting, swirling, and blazing fretwork, maniacal bass tones, a gloriously spiraling guitar solo, and sequences of highly headbangable heavy metal riffing. There’s also an unmistakable undercurrent of darkness in the song, which surfaces once more at the end. It’s one of the more multi-faceted track on the release, and one that gets stuck in the listener’s head quite deeply.

After those two barn-burners, “Early Graves” launches with a slow stomping cadence and moaning and wailing chords that together create a sensation that’s crushing and bereft. But the song kicks into galloping gear and the the riffing jolts, jars, and sweeps across the mind in waves of magnificent defiance, a feeling of being beset on all sides by enemies and obstacles but refusing to relent. It’s a tremendously exhilarating song.

“Old Bones” in turn leaps from the speakers with an immediate fusillade of murdering drums and scorching guitar, but quickly segues into a kaleidoscope of jabbing physicality, freakishly flickering arpeggios, and blaring fanfare chords (here’s one place where I got that flash of a New Orleans street funeral). It’s another multi-faceted, adrenaline-fueled rush, accented by another wonderful guitar solo. The song is abruptly cut short, replaced by a brief bit of ambience that carries the record into its final track. (It’s as if Horse Drawn don’t want you to get too comfortable with… anything… and it’s not the only time this kind of sudden stop will pull you up short).

The closer, “Wasting Faith“, continues the pattern of juxtaposing changing sensations. There’s a feeling of emotional riot in the music, a riot spawned by pain and fear, but in the less unchained sequences the music becomes brooding and bruising in its methodical heavy-weight hammering, and there’s a sense of deep, desolate melancholy in the flowing melody.

As the record’s longest song, “Wasting Faith” also includes sequences in which the drums follow a slow, measured pace and the bass deeply hums, providing the setting for a grieving though magisterial melody. The vocals, as ever, are intensely tormented and enraged, and they briefly transform into a strangled wail. The soulful, bluesy guitar solo wails as well in the song’s finale, enhancing the feeling of bereavement bordering on wretched despair — and it stops before it’s finished, as if severed by a knife, before the music resolves.

Amongst Ghosts is available now on Bandcamp. We’ll leave you with these words from Jonny Doyle:

“We’re not charging for this EP, so if you listen and like it, just share it with a friend. 2020 has been a dumpster fire and if you’re like us you’ve been sitting at home broke and angry, but it has given us the time to finally finish this recording, so we’re very excited to share this with everyone.”

3 Responses to “AN NCS EP PREMIERE (AND A REVIEW): HORSE DRAWN — “AMONGST GHOSTS””