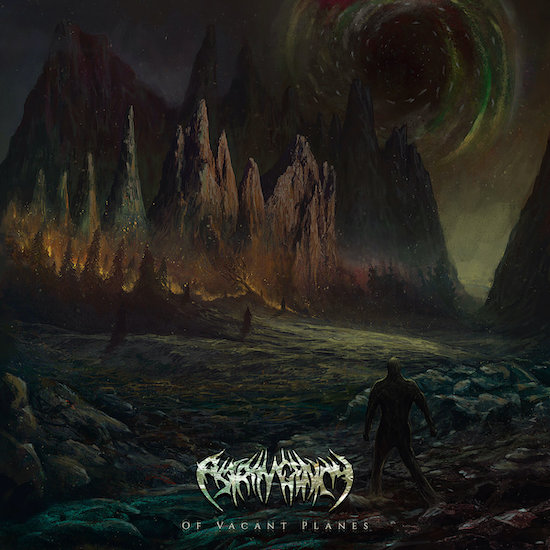 Today we’re helping spread the word about the release of the second album by the West Texas melodic death metal band Astringency, which follows their 2017 full-length debut, Sanguinarium. Entitled Of Vacant Planes, the album is an extravagant 11-track work that’s packed to the brim with intricate, technically adventurous, and tempo-dynamic performances, while incorporating evocative melodies that cross a wide emotional range.

Stylistically, the music draws from many wells, incorporating Scandinavian melodeath gallops, bursts of full-throttle thrashing, episodes of blackened malignancy and gloom, and a lot more. It’s definitely a “modern” take on the music of this old genre, and thus continues to breathe new life into it. As a further sign of that, Astringency call out the music of such bands as The Black Dahlia Murder, Fallujah, and Allegaeon as influences, in addition to the likes of Obscura, Deicide, and Cannibal Corpse. 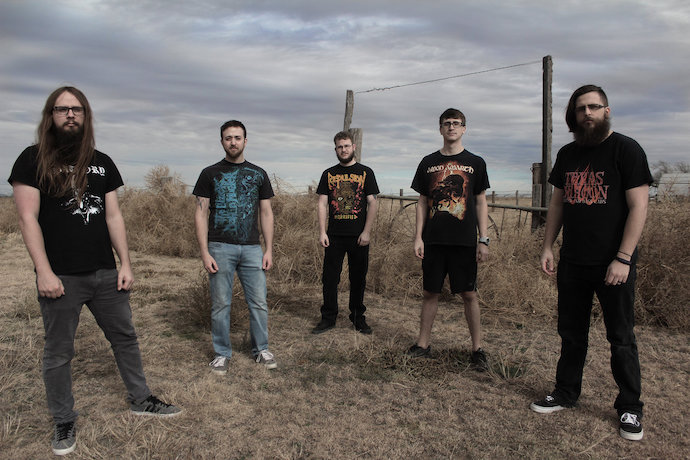 You get an early sense of what Astringency bring to the table through album opener “A Mother’s Touch”, whose dark and disturbing lyrics are accompanied by hammering drums and searing, soaring tremolo’d riffing. The music’s blackened viciousness is matched by Cameron Warren‘s scorching screams, barbaric growls, and imperious roars. There’s a sense of barely controlled mayhem in Austin Price‘s rapidly darting bass notes, in the spiraling, skittering fretwork of guitarists Aaron Prentice and Jake Hackett, and in the frantic, somersaulting drumwork of Jordan Hackett. But in the song’s less turbocharged moments, the melody takes on a darker and more somber mood, while the guitar solo seems to channel anguish and despair.

As you move through the album, however, you’ll find that “A Mother’s Touch” reveals only some of the stylistic dimensions that Astringency’s songwriting explores. They definitely have an affinity for instrumental athleticism, repeatedly charging the songs with fast, technically eye-popping fretwork, spectacular soloing, and continually morphing drum patterns and tempo changes. But they interweave within the songs melodies that themselves change emotional directions.

It’s fair to say that there’s a persistent current of darkness in those melodies, which convey feelings of haunting melancholy, grief, and despair — as well as ominous, sinister, and savage atmospherics. At times, these changes create an amalgam of bleakness and brazenness, as well as grandeur.

While it’s also fair to say that the songs are generally fast-paced, explosive in their energy, and instrumentally extravagant, the band do pick their moments to create contrasts in the momentum and feelings of the music. Some of the twists are more striking than others, such as the majestic, panoramic melody (both wondrous and grieving) that surfaces in “Recrudescence”, the clean vocal harmony that introduces “A Glorious Death” (in a way that might bring to mind a stately medieval chant), and the mesmerizing acoustic-guitar-and-keyboard instrumental piece named “Absence”, which provides a breather of sorts within the album’s generally prevalent high-intensity impact.

Moreover, the album’s penultimate song, “Steps To My Infinity”, ends with a tear-stained piano melody, while the gloom-shrouded (but rhythmically jolting) album closer “Abdicate” begins with glistening celestial notes against a swelling backdrop of ethereal ambient shimmer.

All in all, Of Vacant Planes is both a pulse-pounding ride and an engrossing excursion across changing musical territories, but what becomes clear is that Astringency’s multi-faceted approach is cohesive. They have found a sound that suits them, and they do it very well.

Of Vacant Planes was recorded, mixed, and mastered by Aaron Prentice, and it includes fantastic cover art by Mark Erskine. It’s available now on Bandcamp — CD, digital, and with related merchandise.

In addition to our full stream of the album, we’re also sharing with you Astringency’s previously released video for “Sojourner”.

One Response to “AN NCS ALBUM PREMIERE (AND A REVIEW): ASTRINGENCY — “OF VACANT PLANES””