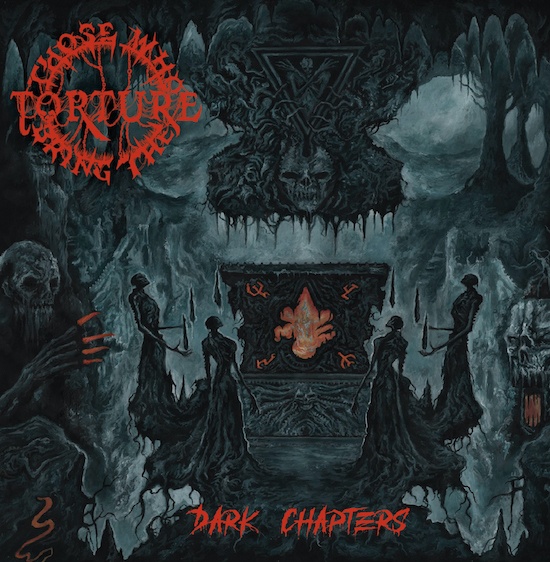 One person’s torture is another person’s joy. And no, we’re not talking about a sadomasochistic relationship, but instead about the kind of death metal that might sear the brains of your neighbors but will bring a big smile to connoisseurs of preternatural menace and mayhem. And who better to do that than a band who proudly name themselves Those Who Bring the Torture?

That name will be familiar to many death metal connoisseurs out there. Founded by the ever-busy Rogga Johansson more than a dozen years ago, the band has produced six albums and a pair of EPs, and a seventh full-length named Dark Chapters is now on the horizon.

The line-up has changed from time to time, as has the direction of the music. On this new record, which will be released on September 30th by Iron Blood and Death Corporation, Rogga handles guitars, bass, and vocals and is joined by lead guitarist Kjetil Lynghaug (Paganizer, Ribspreader, Johansson & Speckmann) and drummer Jon Rudin (Wombbath, Just Before Dawn). As for the music, we have a strong taste of that for you through our premiere of the album’s title track.

“Dark Chapters” proves to be an arresting amalgam of savagery and suffering, of madness and haunting sadness. It’s a heavy, bone-smashing, neck-bending mauler, but the song’s unmistakable darkness derives just as much from its unsettling melodies.

The music is a sudden rush of intensity, an immediate attack of hurtling drums and maniacally writhing riffage. As Rogga‘s roaring growls come in, the beat changes and the mood of the chords darkens into a sound of menace and dread. And then the drumming thunders and a crazed, shrieking guitar lead helps mutate the song into a manifestation of terrified dementia.

The tremolo-driven riffing and feverish soloing strengthen the music’s atmosphere of derangement, while those vicious growls add an element of remorseless cruelty. Yet the song morphs again, becoming a stalking, skull-crushing hulk, and the guitar-lead wails in a ghostly manifestation of misery and mourning. That haunting sound quickly takes up residence in your head and continues to reverberate there like a lost soul after the song concludes.

Iron Blood and Death Corporation will release Dark Chapters in a Digipack CD edition with an 8-page booklet, and a Jewel-Case CD edition. The nine-track album was mixed and mastered by Jonny Pettersson at Studio Unbound, and features cover art by John Quevedo Janssens.

THOSE WHO BRING THE TORTURE:
https://twbtt.bandcamp.com/

One Response to “AN NCS PREMIERE: THOSE WHO BRING THE TORTURE — “DARK CHAPTERS””