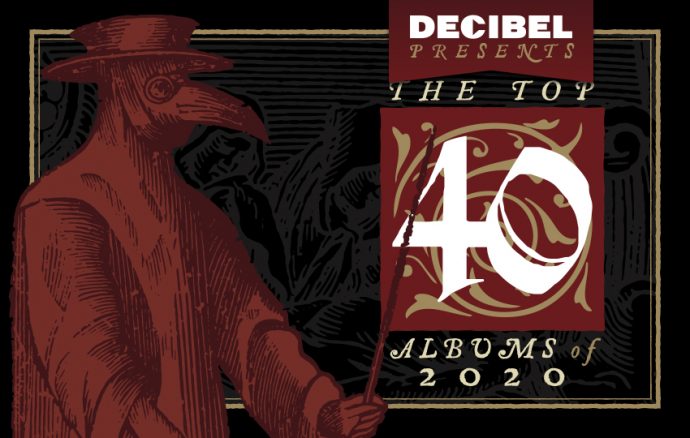 Wow, it’s already that time of year again, and wow, I’m aghast all over again at how early this is starting.

The DECIBEL list actually will officially appear in the magazine’s January 2021 edition, which hasn’t yet hit my own mailbox, but DECIBEL again decided (for the fifth year in a row, or maybe the sixth) to scoop their own list rather than letting leeches like me leak it. They published the list on-line earlier today, and so I can now again re-publish their list without too much guilt, beyond the sheepishness that comes from being one of the factors that forced them to start outing themselves in the first place.

Of course, there will be a lot more content in the January issue (which has Judas Priest on the cover), including commentary about each of these 40 albums and why they were selected, as well as dozens of contributor-conceived year-end Top 5 lists, a Hall of Fame feature on Priest’s Painkiller album, and a brand new Venomous Concept flexi disc. You can order a copy of that issue here HERE. 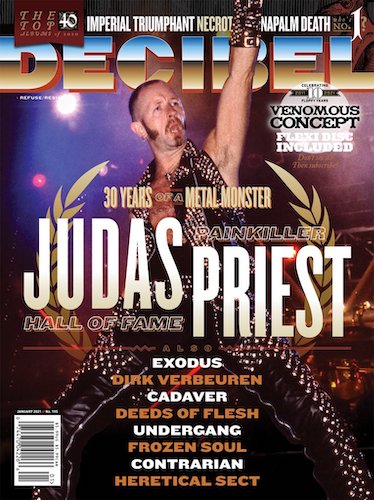 Such lists continue to serve several useful purposes. One, of course, is to introduce fans to albums they may have overlooked. I also know people who don’t buy much music during the year and actually wait to read year-end rankings before preparing their shopping lists. And, perhaps most obviously, they give us something to discuss and argue about. Because apparently we don’t have enough to argue about already, even with a stalled presidential transition here in the U.S. and the virus raging everywhere and way too many people not seeming to care about either of those things.

I usually try to hold my own comments to a minimum when I post these year-end lists from print publications and “big platform” sites, mainly because I can’t manage to make a list of my own. One of my co-writers here has already publicly observed that there’s a lot of albums on the list that he doesn’t think belong anywhere near the top 40 as well as some very pleasant surprises (the biggest of those for him was Exgenesis). He also made the point that these surprises are a positive aspect of lists like this, which tend to focus on “safe” choices and bigger-name bands: “Yes it must, by design, cater to its readership and (to an extent) confirm their expectations and listening habits, but in doing so it will ALSO introduce them to other bands they may not have checked out otherwise.”

To be clear, I doubt that any of us at NCS think that any of the albums on this list are terrible, but each of us would have an argument that other bands should have been on the list in place of some (or maybe many) of these. But as I noted above, that’s inevitable. I happen to think that all of the albums on the list that I managed to hear this year in whole or in part (about three-quarters of them), were at least enjoyable, and sometimes stellar. And even if I couldn’t possibly decide for myself what I think is the best album of the year, I’m happy to celebrate Napalm Death‘s appearance in the No. 1 spot. That is a hell of a good album by a great band.