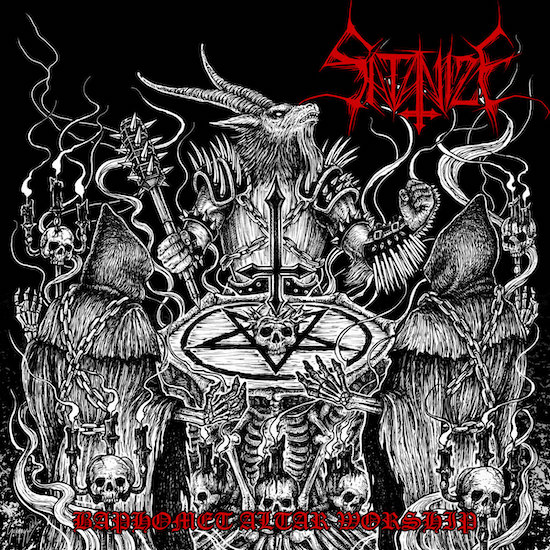 I got big smiles from the press materials for Baphomet Altar Worship, the new album by the Portuguese bestial black metal band Satanize. The biggest smile arrived when I saw that the PR material likened the listening experience to a form of Zen. But by then I had already listened to some of the album — and I actually understood the point, hence the smile.

Make no mistake, just as the album art so vividly portrays, the music on the new album is hellish and iron-fisted. It gives no quarter and yields to nothing in its single-minded channeling of demonic malice and slaughtering barbarity. And yet, and yet, the music does surprisingly have the capacity to induce a fugue state. As unhinged as it is, something about the viper-ous melodies and the jet-speed rhythms produces a strangely mesmerizing effect.

Or maybe I should just speak for myself. You be your own judge. Which you’ll be able to do by listening to “Luciferian Thrones of Devastation“, the song we’re premiering today in advance of the album release by Helter Skelter and Regain Records on January 20th. 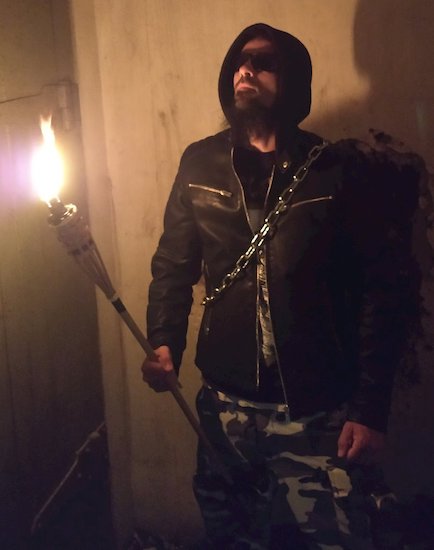 No doubt many of you have already encountered this Portuguese duo, who in their satanic priesthood go by the names Reverend of Diabolical Services and Sinister Sorcery and Reverend of the Hell Legions and Macabre Tyranny. Their desecrating musical output has been insanely prolific, generating five full-lengths before this new one and more than twice as many EPs and splits since the early 2000s. And while the music has been feral and ferocious throughout, it has included its own twists and turns, without ever surrendering that single-minded devotion mentioned above. 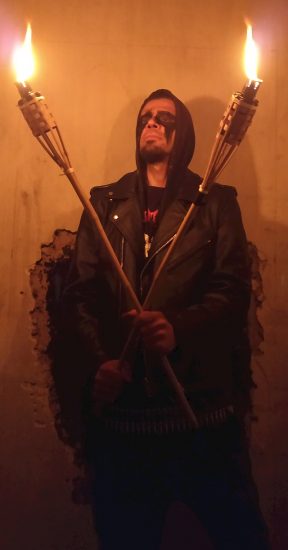 The song we’re presenting today, “Luciferian Thrones of Devastation“, sprays the mind with superheated sulphur, manifesting a riot of pure evil — and I do mean riot. If you imagine your pulse rate controlled by a dial, then further imagine a clawed demon hand reaching out and rapidly spinning it up as far as it will go.

Press play and you’ll get an immediate explosion of frantic, scorching riffs, booming bass fever, maniacally clattering drums, and wild, possessed vocals. The brazen riffing moves in caustic waves, creating sensations that are both cruel and dismal as they descend and glorious as they rise, but always with a feeling of rampant violence and uncontainable chaos. Everything burns. The fervent madness of the vocals is incendiary, and the turbocharged plundering of the drums and bass keep the breathtaking, adrenaline-fueling energy of the song boiling in the red zone.

This isn’t music that causes you to think deep thoughts. Its impact is purely visceral. And sometimes that’s exactly what you need.

That cover art, which tells you pretty much exactly what you’re getting yourself into, was created by the band’s longtime comrade Sickness666. The album is available for pre-order now via the links below. And along with our own premiere, check out the lyric video for the album’s title track, which we’ve also installed below.