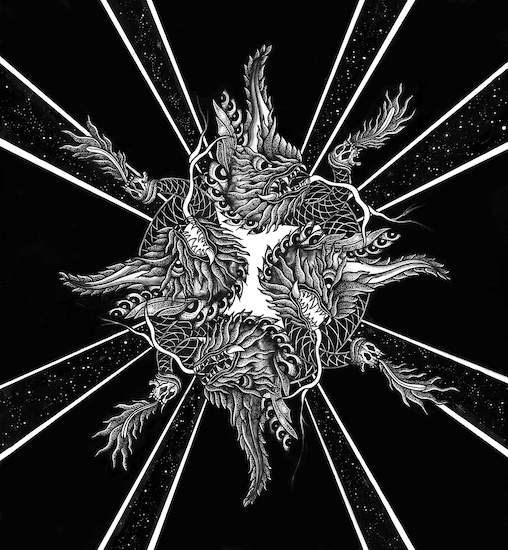 Denver-based Scepter of Eligos describe their punishing amalgam of death, doom, and psychedelic sludge as “psychedelic metal of death”, and based on the song we’re premiering today from their debut album Inverted Illusions, you can understand why. When you hear it, you can also understand why the press materials for the record make references to the likes of Crowbar, Incantation, The Black Angels, Acid Bath, Celtic Frost, and Grave.

But as this listener did, you might also be tempted to imagine the mind-mutilating “Reabsorbed” as a monstrous hell-beast dotted with weeping sores, stinking of death, staggering across a landscape of skulls — and undergoing spasms that transform it into a high-speed thresher of flesh, all gnashing fangs and ravaging claws. In other words, it’s a nasty, evil, mutating piece of work. 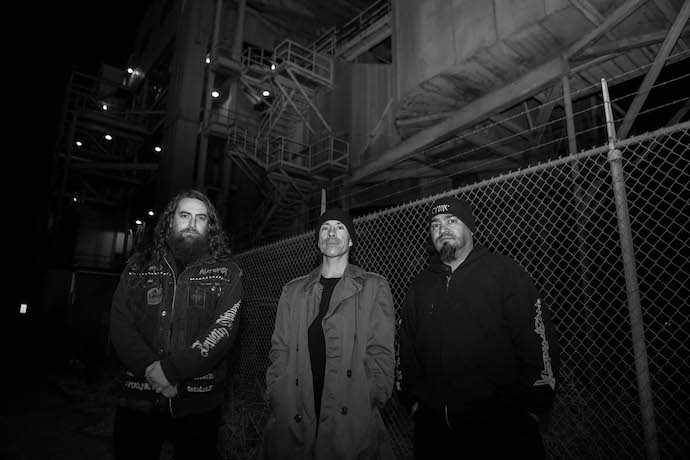 To accompany such heavy and hellish sounds, vocalist/guitarist Andrew Sares has crafted lyrics based on occult practices and readings — and the band take their name from Aleister Crowley’s description of Eligos, a Goetic demon that is said to appear on a winged horse holding a scepter and a serpent. Joining him in this infernal work are bassist Chris Candelario and drummer Frank Candelario. Together they’ve released a 2013 demo, a 2017 single in memory of Martin Eric Ain, and a 2018 EP, all of which pave the way for this new full-length.

To return to the song we’re premiering, the first minute of “Reabsorbed” provides an unpredictable but attention-grabbing introduction to what’s coming. A slow, corroded arpeggio comes out of one channel and very quickly creates a dank, morbid feeling, oozing misery like a suppurating wound. Then, with a squeal, the other channel kicks in, creating a pestilential harmony, at the same time as a granite-heavy bass puts the hammer to your head and the drums go off in spasms of violence. From-the-catacombs roars arrive, and not long after the song then erupts in a torrent of blasting percussion and deranged riffing.

One reason this makes such a good introduction is that the rest of the song is just as mercurial. The pacing switches frequently, lurching and stomping, crawling and scampering, and suffering frenzied seizures. In the slower movements, the thick, distorted sounds hit with crushing weight. In the battering paroxysms, giant hornets swarm and scythe, and a human throat howls and shrieks. Whining leads boil in delirious froths and mewl like hungry devil children. And misery returns in sickening strength at the end, along with one last stomp-fest.

Inverted Illusions features eye-catching cover art by Christina Hunt of Heavy Metal Talisman. The album will be released in 2021. A precise date hasn’t yet been announced, but keep an eye on the locations linked below for further news on that front.