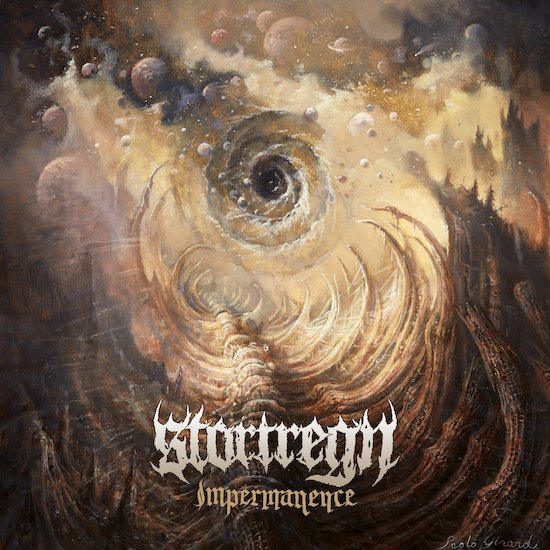 Today we present our site’s first premiere of 2021, and we could hardly ask for a better way to begin than with this new song “Cosmos Eater“, the first single from the forthcoming fifth album by the Swiss band Stortregn. Entitled Impermanence, and adorned with wonderful artwork created by the maestro Paolo Girardi, the record is set for a March 12th release by the band’s new label, The Artisan Era.

If by chance you’re unfamiliar with the music of Stortregn, you might guess from their new label partnership that the band’s stock-in-trade is technical death metal, but you would only be partially correct. Expertly executed technical death metal is indeed a vital ingredient in their music, but far from the only one. Even more so on this new album than before, Stortregn have drawn together a multitude of influences and musical ingredients, and done so in ways that seem naturally conducive to the fascinating experiences of each song. And “Cosmos Eater“, presented through a lyric video, is undeniably fascinating. 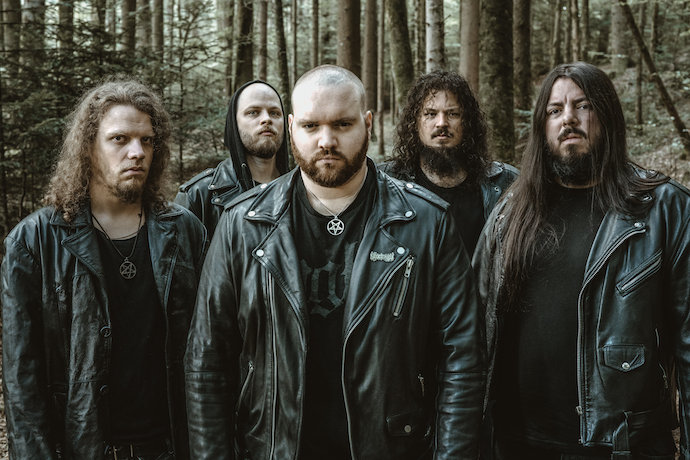 The swirling notes and grand chords at the song’s opening create an immediate beckoning allure, a sense of intrigue — and perhaps one of foreboding as well. When the song explodes — and it does — the effect is absolutely electrifying. Driven by a turbocharged drum attack, the song storms the senses with a rich layering of darting and flickering arpeggios, spiraling melodies, and a conjunction of vicious screams and monstrous roars.

Thanks to a scintillating dual-guitar solo, the band turn the adrenaline dial even higher (and it was damned high already) — but then abruptly change course, leading us into moods of mystery and tension again, although the menacing dream-state they create is leavened with acrobatic drum fills. The music begins to pick up steam again through mercurial fretwork, frightening growled words, and increasingly battering percussion, paving the way for a glorious guitar solo that lifts the song skyward and into a pulse-pounding crescendo — and a contrasting finale.

All in all, as it moves along its winding path, the song is not only exhilarating but also becomes melodically moving and memorable. It’s a great teaser for the album as a whole, which includes seven more tracks in addition to “Cosmos Eater“.

Through “Cosmos Eater” you can already discern some of the manifold ingredients that Stortregn bring into their compositions, but we’ll also share these words from the label’s promotional material: “Impermanence draws inspiration from a mix of a large array of influences including progressive tech-death to 90’s Swedish black metal, old-school heavy metal, and jazz in order to craft a unique style of melodic black metal intertwined with a variety of death metal influences. Stortregn‘s Impermanence is highly recommended for fans of bands such as Obscura, Opeth, Inferi, Dissection.”

“With a downpour of eight cosmic tracks, crafted with stellar riffs, thundering blast beats, and violence, we are ready to unleash our 5th studio album Impermanence onto the world! We’ve put our souls into this craft, exploring a wide range of musical influences and themes, all interconnected to create a paradigm of epicness. With this album, we managed to merge the contemporary tech-death sound and ideas with our older influences. Impermanence isn’t just a new studio album: it’s a face-melting sonic eruption! The storm is coming, you have been warned…”