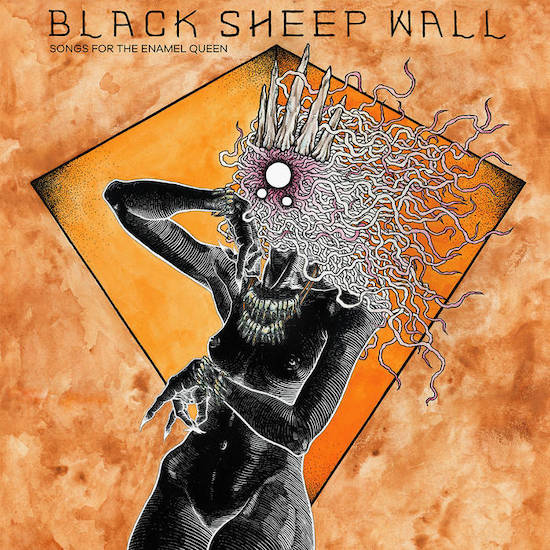 (Here’s Todd Manning’s review of the new album by California’s Black Sheep Wall, which will be released on February 26th by Silent Pendulum Records.)

To say that the Sludge and Doom genres are oversaturated might be a bit of an understatement. There’s a lot of good stuff out there, but there’s only so much Sabbath-worship and weed fetish one can listen to before it all starts to blend together. On the other hand, L.A.-based Sludge band Black Sheep Wall have always stood apart, with a sound that pulls from a wide range of influences.

Songs for the Enamel Queen is the group’s first full-length in nearly five years and it’s a motherfucker, there’s just no other way to put. The album depicts a band and a mind on the edge, haunted by depression and addiction, and the 60-minute run time is nothing short of a harrowing journey. 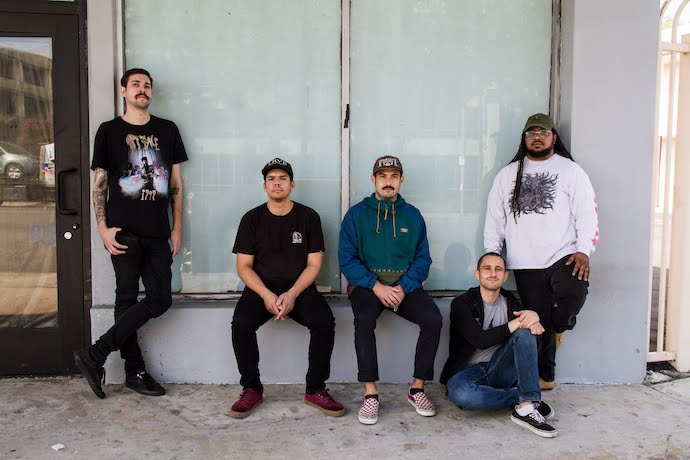 Opening track “Human Shaped Hole” illustrates both the emotional intensity and the group’s originality to great effect. Sure, these guys are insanely heavy, but the DNA isn’t dominated only by Black Sabbath, Electric Wizard, or any of the like. Instead, it sounds like they draw their inspirations from a myriad of unusual sources. The main riff here sounds more in the vein of classic Botch than anything one normally considers Sludge, yet the sonic density is still there. The low end is enormous, and they even throw in a moment or two of blasting as well. They eventually shift into a more traditional chug, and finally the song ends with some crashing chords, more Doom-oriented in origin.

“New Measures of Failure” takes this blueprint and greatly expands on it. Once again, the opening salvo leans toward an updated version of the weirder end of ‘90s Metalcore — think the criminally underrated Ire, Bloodlet, and Starkweather. And when things settle into more of a groove, it’s more Godflesh than EyeHateGod. But in about the time it took the opener to finish, this song dives headlong into a somewhat softer hypnotic section. This passage flirts with Post-Rock without ever losing its menace. When the distortion returns, a bludgeoning of monumental proportion occurs.

This track brings up another important aspect of Black Sheep Wall’s sound — Brandon Gillichbauer’s vocals and lyrics. After the group runs through some truly vicious and noisy Doom, he screams (rather audibly):

While a lot of Metal sings about addiction and depression, there’s something particularly poignant about Black Sheep Wall. Their negativity doesn’t just seem like business as usual, this shit hurts. The album seems to document a really dark period, hopefully one that has passed.

This song is followed up by the one-two punch of “Concrete God” and “Ballad of a Flawed Animal”. The former hints at the unpredictability of Noise Rock, but with interesting melodic flourishes. It also bounces in and out of a nice Isis-like groove. The latter opens with the group walking a tightrope between structures of chaos — bouts of what sounds like improvisational noise spar with vicious Sludge passages. They eventually err on the side of brutal riffing, and we are all the more punished for it.

The final trio of songs all break the ten-minute mark and show what an expansive sound Black Sheep Wall possesses. “Ren” bludgeons much like its predecessors, but then halfway through the volume drops and Gillichbauer screams over clean guitars while being accompanied by a melodic trumpet line. This might sound weird in print but it completely works, the trumpet giving the affair a sense of sadness and despair. This is followed by “Mr. Gone”, which hints at Post-Rock in moments of heavily-effected guitar beauty, but most of the tune sounds like a body being dragged through a gutter of broken glass.

The album closes with “Prayer Sheet for Wound and Nail”. This song, while still incredibly heavy, seems much more somber in tone. There is real pain here. For all of Metal’s obsession with the dark side of life, few have the power to remind the listener just how real the subject matter can be. This band and album are like a curtain being pulled away, every bit as heavy and dark as any band out there, but also vulnerable, like a raw nerve. In all honesty, I’ve played in bands that can barely hold things together, and it feels like that’s what is going on here.  Here’s to hoping Black Sheep Wall can ride this thing until the wheels fall off. My heart goes out to them.