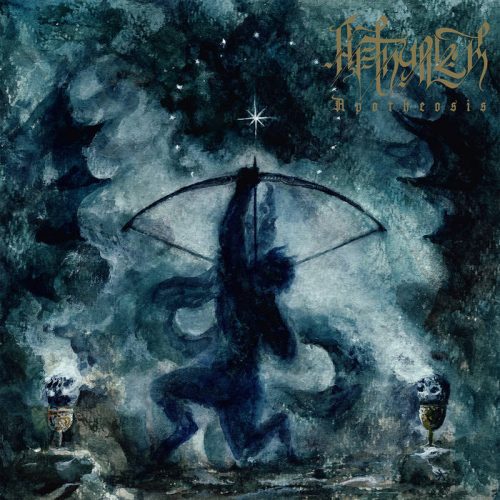 (Here is Andy Synn‘s review of the new album by the Finnish band Aethyrick, which is set for release by Sinister Flame on January 22nd — tomorrow!)

I have to begin this review with a mea culpa.

I clearly remember listening to Aethyrick’s previous album, Gnosis, when it was released last year. I remember enjoying it, I remember making notes about it, I remember fully intending to review it… but somehow, for some reason, it never happened. And that’s no-one’s fault but my own.

However, time heals all wounds – or, at least, gives us an opportunity to atone for them – and the recent release of the prolific Finnish duo’s third album means I’m not going to make the same mistake twice. 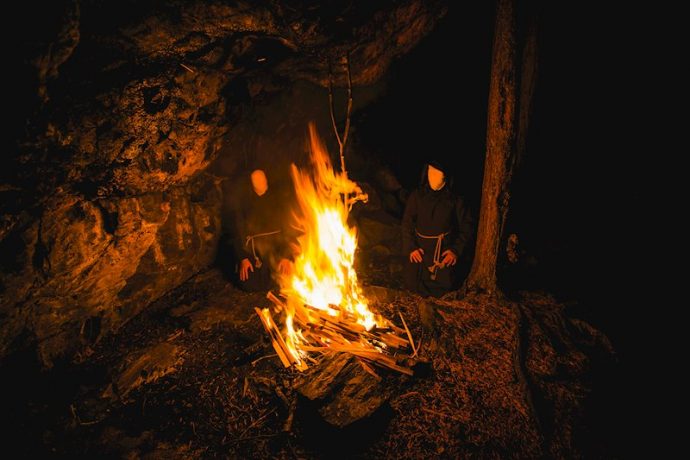 If you’re not familiar with the band (and I’ll admit that last year was my introduction to them too), then you might be surprised to learn that Aethyrick largely eschew the ravenously raw, brimstone-laced fury most often associated with the Finnish Black Metal scene in favour of a much more atmospheric and chillingly elegant approach.

That’s not to say that Apotheosis is lacking in blackened bite – the vocals in particular instantly put a lie to any such suggestion – nor is it as luridly and unnecessarily “polished” as many so-called “Atmospheric Black Metal” albums can end up being.

Instead it possesses both an organic warmth and a steely-eyed coldness that allows each and every instrument and element (including some pleasingly nimble and nuanced bass work) room to breathe without dulling their icy edge.

Granted, at first glance the band’s third album might not seem to offer much that you haven’t heard before. And, indeed, there’s an argument to be made that there’s not really anything new to be found here at all.

But, then, innovation clearly isn’t the point. Introspection is. And while the brooding, slow-burn nature of the record means it demands a certain amount of patience and willing immersion to fully appreciate it, you’ll likely find that this gives Apotheosis much more staying-power than many other albums whose more intense initial impact quickly fades after only a few listens.

And yet, as introverted and as self-contained as this album is, it is also capable of raising the intensity to some impressively rapturous heights, whether it’s during the driving drums and chiming melodies of opener “The Starlit Altar” or the dreamlike deluge of “Flesh Once Divided”, in a manner reminiscent of The Great Old Ones at their most cosmologically contemplative.

There is no doubt, however, that, for all their more atmospheric inclinations, Aethyrick remain a Black Metal band at heart, pure as the driven snow in both form and function, from the utterly gorgeous, and gorgeously grim, melodies that run through “Rosary of Midnights” to the almost Mgła-esque sense of harmony and groove underlying the drawn-out desolation of “In Blood Wisdom”, to the sinister, simmering catharsis of closer “Path of Ordeal”.

Apotheosis will not change the world, nor will it redefine your understanding of Black Metal, but it will undoubtedly strike a deep and resonant chord with anyone with a mind open enough, and a heart black enough, to understand and appreciate exactly what Aethyrick have created here.