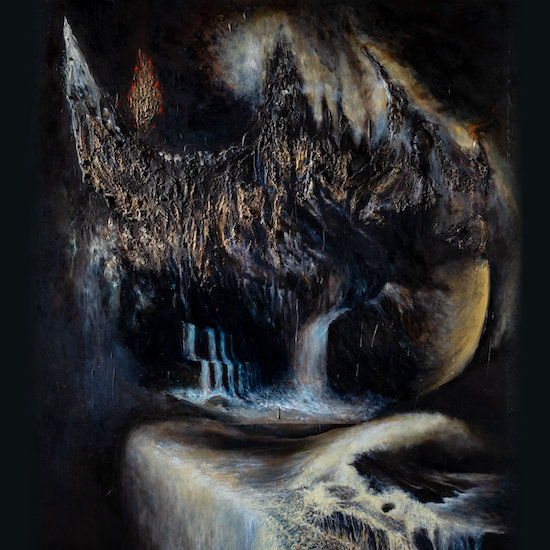 The label states that the album is not for everyone, but represents “the true meaning of Avantgarde”. And while that statement could be interpreted as a calculated effort to create intrigue, when you hear the album you will realize that it is honest and accurate. And hear it you shall, because below you’ll find our premiere of a full stream of the record.

It is indisputably true that Imperative Imperceptible Impulse is not “easy listening”. Although it includes moments that become eerily mesmerizing, most of the minutes are supercharged with maniacal energy and packed with mind-boggling instrumental extravagance. Though structures and repeating patterns can be discerned as they loop back around to where they began, the dominant impression of all the intricate permutations is one of madness run rampant, and the inventive use of dissonance and discord, executed with eye-popping technical prowess, creates an experience that is both dazzling and disturbing.

The degree of dedication displayed by the band to their unconventional craft goes even deeper than you might expect, even after becoming thoroughly blinded and bewildered by the twisted marvels within this record. For example, we’re told that they self-produced the album and that each band member contributed to “researching, designing and building most of the equipment used for the recordings (drums parts, cabinets, bass/guitar/studio-related electronics) and collecting mainly vintage, odd and uncommon gears”.

Moreover, while the music could be considered a merging of many different styles, the most prominent ones being extreme death/black metal, avantgarde, jazz, post-core, doom/sludge, and ambient, we’re also told that the compositions were heavily influenced by 20th-century classical composers such as Stravinsky, Šostakóvič, Xenakis, Scelsi, Penderecki and Ligeti, to name a few.

Even the lyrics are carefully plotted. They are mysterious but elegant and thought-provoking, and they address big and timeless subjects. 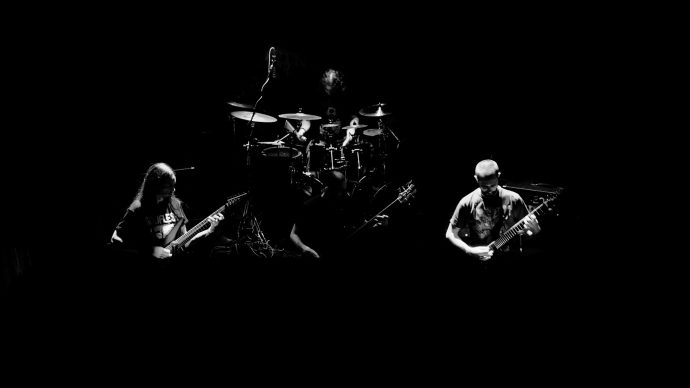 From the very beginning, with the launch of “Sub Specie Aeternitatis”, tumult reigns in an effusion of rumbling and tumbling drumwork, maniacally darting, squirming, and squealing guitars, and constantly mutating bass lines. As the vocalist roars and screams, the instrumentalists cavort and careen, using a tightly controlled and technically virtuosic performance to create exhilarating sensations of chaos. All the moving parts — and they are all moving, all the time — interact in intricate ways that are not easily comprehended at first exposure. It’s a madhouse of sound, a riot of dissonance and discord, and only becomes more unnerving when the riotous pace relents and the sounds become both more deranged, and then more chilling as it conjures visions of supernatural menace. Eerie astral emanations slither and vibrate over punishing drum spasms and then linger in extended febrile radiations which carry over into the second track.

That second track, “Inexorably Ousted Sente”, eventually tosses the listener into another labyrinth of crazed instrumental acrobatics. Jolting grooves segment the high-flying, mind-boggling performances, creating a structure within which the roller-coaster ride takes place. The band again pick a point at which to steady the twisting and turning machinations, slowing the drums, allowing the bass to surface more prominently, and putting another chill on the skin before setting the listener’s teeth on edge with shrill, frenzied guitars that spurt dissonance into the ears over throbbing bass tones and drum patterns that are somehow both steady and mercurial. Ultimately, the band apply a cool balm to the mind, allowing the music to diminish from sounds of frightening lunacy and to drift softly away in a mysterious shimmer.

“Coincidentia Oppositorum”, the album’s longest track, begins anew, not with another audio stampede but with alien yet mesmerizing guitar tones. Skull-busting drums and lead-weighted bass slugs make an appearance, and then the song seems to re-set again, with guitar reverberations that grow increasingly frantic until the whole band throw themselves into another paroxysm of discordant fretwork, high-octane drumming, and howling/growling/screaming vocal ferocity. Atonal hammer blows again provide a bit of structure, and the screaming guitars somehow create a bizarre harmony out of their interlocking disharmony. When the band dial back the energy this time, alien tonalities rear their nightmarish heads across a landscape of cold drum blows, and then everything catches fire again, spinning and leaping and manifesting musical grand mal seizures, again anchored by brutish atonal pounding, and again relenting in a way that sends the listener out into frightening ambient space lanes. 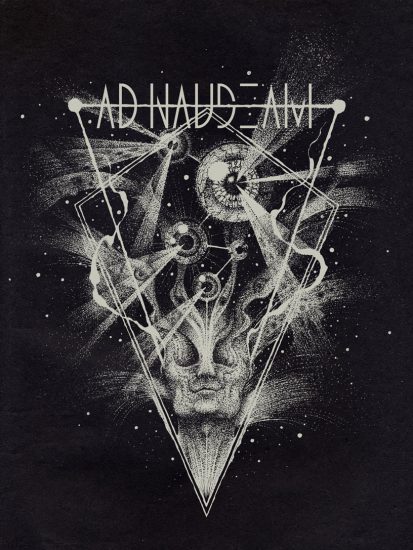 Shirt art by View From the Coffin

“Imperative Imperceptible Impulse” in turn melds glittering and hypnotic tones that have an enticing effect with outbursts of destructive cataclysm and the application of whirring ice-pick drill-bits to your ear-drums. The music is demented, destabilizing, and as likely to produce queasiness as adrenaline bursts, with only the marvelous and constantly shifting rhythmic patterns providing something to hang onto (though to be fair, it’s like hanging onto the hooves of wild horses racing across broken terrain). The tempo changes, but the song never really settles down, because when the rhythm section slows, the guitars continue to spasm and squirm like the nerves of a hyperactive lunatic.

If you might be expecting some kind of interlude-reprieve at the outset of “Horror Vacui”, none is to be found, but perhaps none should have been expected, given the name of the song. At first, it’s as frantically twisted and disturbing as anything else on the album. It’s not until you come near the three-minute mark that the feverishness subsides, but what happens then is indeed a horrifying experience, no less dissonant but pitch-black, predatory, and unreasoning in its atmosphere. Slashing chords and meandering arpeggios coupled with a warm bass hum create a different kind of interlude, one that feels grief-stricken at the core — a semblance of grief that explodes in sounds of berserker anguish and mind-mutilating fear, capped by a riveting snare-drum performance.

How would you expect the band to close an album such as this? Well, they don’t do it by suddenly following a safe and straight line. Instead, “Human Interface To No God” runs the listener through one last gauntlet of technically eye-popping and compositionally intricate savagery, one final effort to flip your mind upside-down and inside-out and leave you even more thoroughly discombobulated. Being shoved off-balance is by now to be expected, but here the band also accomplish that mission by segueing into a slow, dreamlike passage that hints of jazziness (with whiffs of opium in the air). Enjoy the lull, allow your breathing to slow and your pulse to subside as the music becomes even slower and simpler. It affords a time of reflection before silence falls — and then you can begin to think about what the hell you’ve just experienced.

Avantgarde Music is releasing this extraordinary album in a variety of physical formats, and a digital edition is available from the band. Pre-order links to everything are to be found below, along with our complete premiere stream.