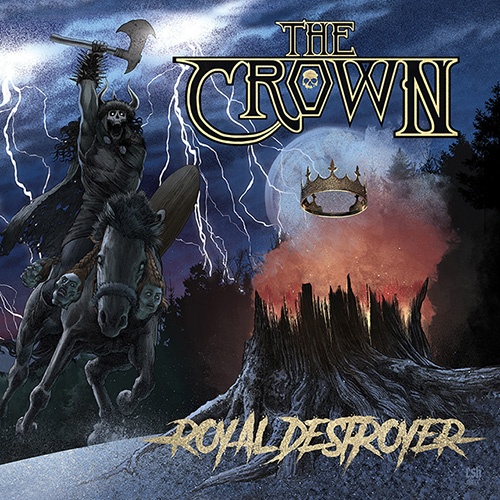 (We present Andy Synn‘s review of the new album by the Swedish death metal band The Crown, who are celebrating their 30th anniversary this year. Metal Blade will release the new record on March 12th.)

One thing I’ve learned, in all my years trapped on this primitive dirtball inhabited by psychotic apes, is that it doesn’t take much for human beings to give in to their tribalistic instincts.

Case in point, although we all know that music isn’t (or shouldn’t be) a competition, we sure do seem to love to pick our sides when it comes to pitting one band, or one genre, against another, and I’ll admit I’ve been just as guilty of this as anyone, especially in my younger days.

In fact, I remember quite clearly that, back in the early 2000s, when everyone else was still riffing on (and ripping off) Slaughter of the Soul I was that kid who was more than happy to tell whoever was willing to listen that they should be listening to Deathrace King instead, since The Crown were so obviously the superior band.

Of course, over the years I’ve grown up a lot and learned a fair few things, the most important of which is… 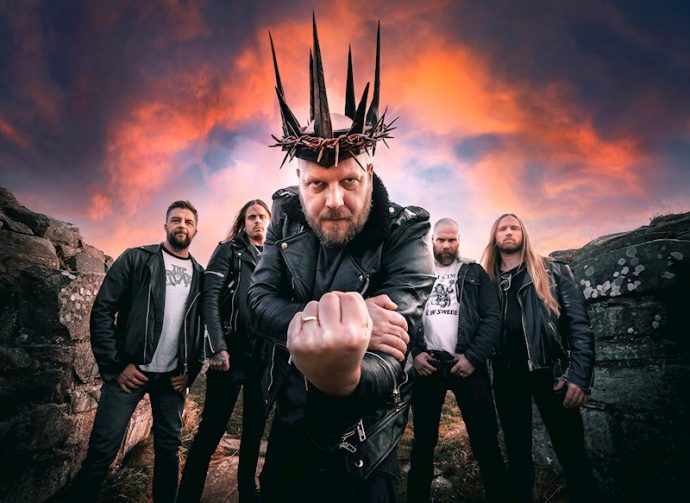 Ok, ok, I’m kidding, Put down your pitchforks. I actually really like both bands and have written good things about both AtG’s “comeback” albums (in fact I’d still argue that At War With Reality is actually a deeper and more rewarding album than SotS, but that’s a discussion for another day).

And while The Crown’s big comeback perhaps wasn’t quite as successful or high-profile as that of their Gothenburg cousins (I’m still a big fan of Doomsday King, but Death Is Not Dead was definitely sub-par, even if it did give us “Godeater”) there’s no denying that they absolutely knocked it out of the park with the deathly swole and thrashy swagger of Cobra Speed Venom.

If there was one complaint to be made about CSV – and I think it’s a valid one – it was that the album was perhaps a little bit bloated (and that’s not even counting the three different “bonus tracks”) and could have benefited from having a tiny bit of fat trimmed here and there.

Which is why it’s so satisfying to be able to say that Royal Destroyer is an altogether leaner (even if some of the songs are a little longer, the overall album is shorter, sharper, and even more impactful), and meaner (drummer Henrik Axelsson in particular puts in an absolutely bloodthirsty performance behind the kit) piece of work, not to mention that little bit more nimble and energetic, as the band appear to have added a bit more Melodic Death Metal back into their sound to sharpen up their dominant denim ‘n’ leather Death-Thrash attack.

It’s not absolutely perfect, of course. Oddly enough, while it’s an absolute blast (pun intended), brutal opener “Baptised In Violence” actually seems a little like the odd man out in hindsight, as it doesn’t quite fit with the general tone and vibe of the rest of the record.

But, oh, what a record it is, just pummelling you in the face, again and again, song after song, with a seemingly endless array of humongous, hook-heavy riffs, abrasive, anthemically-aggressive vocals, and terrifying, turbo-charged drums, all delivered with the unrelenting energy and enthusiasm of a band half their age.

Of course, you’d really expect nothing less from The Crown (even in their lesser moments they’ve always been capable of kicking seven shades of Satanic shit out of their listeners), and ultimately it’s the strength of their songwriting which really makes this record work, running the gamut from the gut-churning thrash ‘n’ chug of “Let the Hammering Begin!” and the rapid-fire riff-fest of “Motorbreath” to the massive, moody stomp of “Glorious Hades” and the full-throttle extremity of “Devoid of Light”, and everything in between.

Hell, there’s even points where the band decide to stretch their wings a little, with both “Ultra Faust” and “Scandinavian Satan” channelling some of the punchy, punky vibe of 2003’s Possessed 13, while “We Drift On” showcases a more melodic and surprisingly introspective side of the band than we’re used to in a way that occasionally recalls a more sombre and soulful version of At the Gates.

But don’t worry, The Crown haven’t gone soft, sold out, or started chasing trends. As while Royal Destroyer is a ridiculously catchy album – trust me, you’re going to be yelling along and banging your heads to the crushingly catchy riffs and disgustingly infectious choruses of songs like “Full Metal Justice” for years to come – it’s also an album that doesn’t pull any punches along the way, ultimately culminating in the breathtaking intensity of blast-driven closer “Beyond the Frail”, which effectively welds together every aspect of the band’s sound into one murderous metallic death-machine.

Let’s face it, if there was every any doubt about it, this album proves, once and for all, that The Crown are undeniable and undisputed Death Metal royalty.

3 Responses to “THE CROWN: “ROYAL DESTROYER””