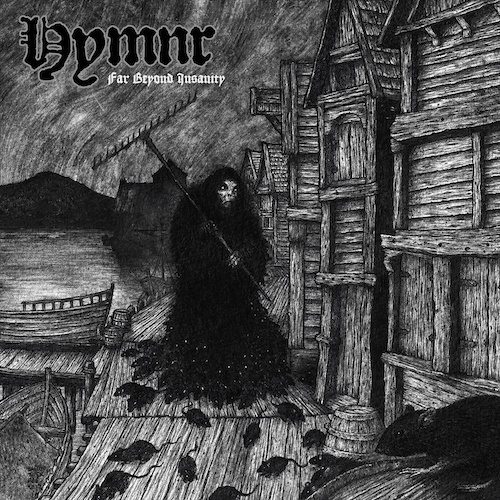 Providing only a glimpse of its extravagant talents last year, the black metal band Hymnr (a trio of unknown locations) will soon reveal the full flowering of their unearthly wonders through a debut album named (fittingly) Far Beyond Insanity. With a release date of April 23rd through Saturnal Records, the album consists of four long tracks ranging from 8 to 13 minutes in length, and today it’s our great pleasure to premiere the longest of them.

Both the band and the album have a conceptual focus (the tracks on Far Beyond Insanity are identified only as Parts I through IV), though the concept is mysterious (as is the music). We are told only that “the concept of Hymnr is its own tale of the tragic path that has led the world, humanity, and religion down this downwards spiral that this cosmic plane has become.”

Every Part in this tale of how everything ended up here is so fascinating (and disturbing) that the experiences become transfixing — and that is certainly true of Part III, the piece that we’re presenting today. 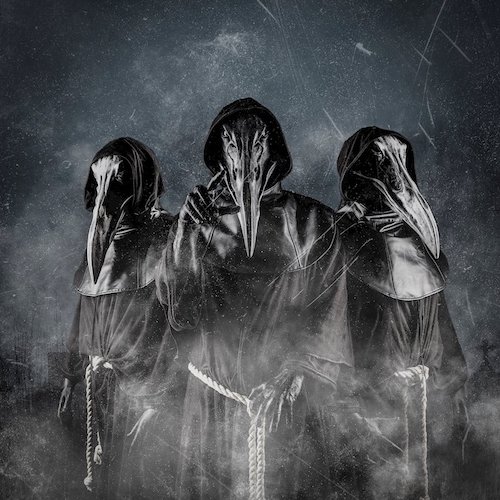 Through a collage of quirky, dissonant disharmonies, the ringing and buzzing guitars immediately create a beguiling but unnerving sensation, which becomes even more disturbing as the music flares in frenzies and the steady drumbeats become a rapid battering ram. Vicious snarls add to the music’s frightening transformation. Grim scissoring riffs and tumultuous drum-fills segment these blaring and blazing paroxysms of sound, but the music also combines skittering fretwork with sorrowful flowing melodic panoramas that seem increasingly anguished, further underscoring the juxtapositions in the song.

And the juxtapositions are striking. The experience is persistently bewitching and seductive, while also demented and dangerous. It sends the mind feverishly spinning into storm-tossed supernatural dimensions where apparitions whirl and lightning flashes, and where groaning chords over measured beats increase the feelings of tension and peril. A kind of terrible magnificence also rises through the music, unmistakably dire and grief-stricken but nonetheless spellbinding. And as the music moves through its manifold phases and permutations, through its various expressions of sorcery and terror, of seduction and savagery, it becomes more and more addictive, more and more memorable….

Don’t stop here, because below you’ll also find a stream of this debut album’s opening track, and it’s just as stunning as the one we’re presenting today.

Saturnal is giving the album a suitably lavish release, providing it on CD, vinyl LP, and cassette tape formats. It was mixed and mastered by Christer Krogh at Velvet Recording, and the creepy cover artwork was rendered by David Thiérrée.

One Response to “AN NCS PREMIERE: HYMNR — “PART III””