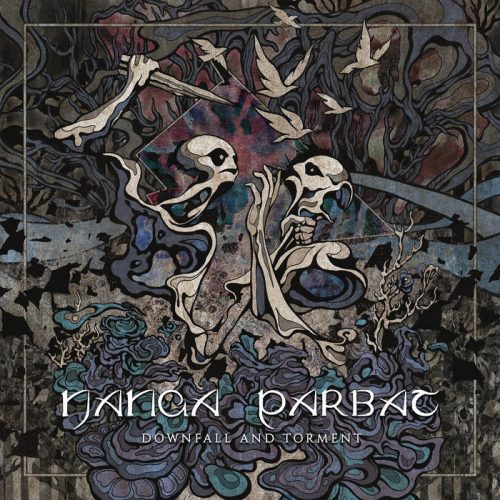 It is a truth, universally acknowledged, that discovering, and falling in love with, a brand new band is one of life’s great joys.

This is especially true when that band absolutely knock it out of the park with their first try.

Such is the case with Downfall and Torment, the debut album from Italian Progressive Death maestros Nanga Parbat.

With a sound that’s both well-defined, yet wide-ranging, it wouldn’t be a stretch to say that songs like “Blood, Death, and Silence” and “Demon in the Snow” (which, for obvious reasons, were selected as pre-release singles) have the potential to appeal to a range of listeners, whether they’re looking for something that channels the dense melodic riffage and proggy proclivities of early Allegaeon, the grim grandeur and vivid vocal variety of modern-day Moonspell, or even… dare I say it… the more epic and anthemic approach of recent Trivium (which, in this case, is no bad thing).

Indeed, it would be wise not to underestimate the band’s potential crossover appeal, as while their technical talents are undeniable – the guitarists in particular show themselves to be just as comfortable with chunky, rhythmic riffs as they are with poignant acoustic passages and gigantic, grandstanding leads, while drummer Giulio Galati (Hideous Divinity, Nero Di Marte, and more) shifts smoothly from full-force intensity to restrained intricacy as needed – it’s the group’s keen grasp of the key fundamentals of songwriting, the importance of structure, dynamic, and flow, which makes this album such an impressive, progressive, yet also strikingly accessible, piece of work.

This is, if anything, even more obvious during tracks such as “Tidal Blight”, “Obscure Rains”, and “Curse of the Thaw”, where the band’s sound – brooding-yet-bombastic, heavy-yet-hooky, and characterised by some truly captivating interplay between gritty growls and soaring cleans (the latter of which, it must be noted, are treated as a vital and integral part of the group’s identity, rather than as an attention-grabbing gimmick) – achieves a whole new level of potency and creativity.

Look I’m not saying that Downfall and Torment is the best album of the year – it’s only the band’s debut after all (though, going in blind, you might be hard pressed to tell that) – but it’s really good. Good in the way you feel in your bones and all the way down to your toes. Good in the way that immediately says “this is a band to watch”.

Granted, there’s still a few kinks to be ironed out here and there, and a couple of edges that probably need a bit more sharpening – a punchier mix would probably help, as would some extra focus on making some of the bigger dynamic transitions “pop” a little more – but the seeds, the signs, the spark, of something truly great are already here.

Nowhere is this made more clear than during the titanic, almost thirteen minute title-track, where the band make use of every inch of available sonic space – weaving a majestic metallic tapestry of taut riffs, proggy bass-lines and sparkling solos, sombre acoustic embellishments, epic, pseudo-symphonic synths, and vibrant, visceral vocals – to spread their wings as wide as they can.

And, if they can build on the impressive foundation they’ve laid down here in the future, well, the sky really is the limit.

One Response to “NANGA PARBAT – DOWNFALL AND TORMENT”