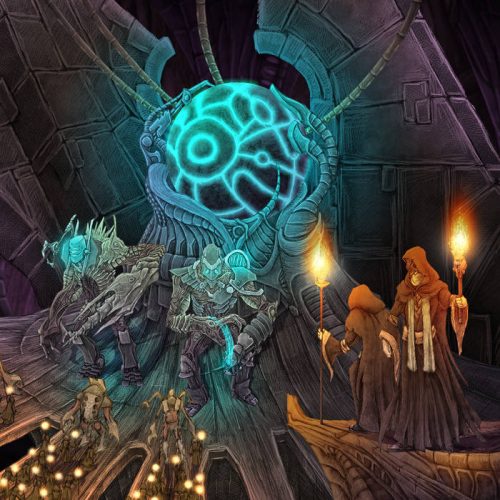 If there’s one thing I can say about NCS, it’s that we are loyal to the bands we choose to cover (sometimes to a fault).

Chances are that if we like what you do then we’ll do our best to stick by you, no matter how long it takes, and try to keep one eye (or ear) open for whatever you do next.

Oh, sure, we still love seeking out strange new bands from strange new places, boldly going where other sites fear to tread (ok, that last part might be a bit of an exaggeration), but we also like to stay in touch with the various different artists we’ve (dis)covered over the years too, as it’s always interesting to see and hear how they’re developing and evolving.

Case in point, we first wrote about Prog-Black cosmonauts Æthĕrĭa Conscĭentĭa when they released their debut, the four-track sci-fi concept album Tales from Hydhradh, back in 2018, and now, a little over three years later, we’re back again with a much more in-depth look at their new record, Corrupted Pillars of Vanity, which is both bigger, bolder, and – most importantly – better than its predecessor in pretty much every way.

For those unfamiliar with the band’s work, the French foursome (saxophonist Simon Chttln is longer a full member of the group, although he still contributes to the album) deal in a distinctive blend of bristling Black Metal and moody melodrama where blaring saxophone plays as important a role as blazing blastbeats, and have – understandably – been compared to other, similarly unorthodox, purveyors of what I like to call Noir Metal such as Katharos XIII, Névoa, and (most obviously) White Ward (two members of which actually make an appearance on Corrupted Pillars…).

The band’s penchant for shimmering sci-fi soundscapes and punchy, pneumatic riffs, however, also identifies them as part of a growing lineage of bands, from Dødheimsgard to Khonsu to Mare Cognitum, and beyond, using their art to explore, or to illuminate, the outer limits of the outer spaces… whether totally fictional or terrifyingly literal in nature.

As you may have gathered, then, Corrupted Pillars… won’t be for everyone. And it definitely won’t be for all Black Metal fans. It’s too odd, too outlandish, too polished – not to mention both too “Progressive” and too “Post-” – to appeal to the truly kvlt or terminally jaded. But it is, undeniably, an impressively intricate, unexpectedly intense, and, above all, engagingly immersive, album in its own right.

The opening pairing of “Asporhos’ Altering Odyssey” and “The Corrupted Sacrament” are, arguably, the songs most closely aligned with the band’s previous album, serving as both a seamless point of transition from one record to the next as well as a peerless exhibition of all the ways in which the group’s sound has improved and evolved in the years between the two releases.

Whether it’s the multilayered instrumentation (plucked acoustic strings and warbling brass notes weaving their way through waves of riveting distortion and rippling percussion) and heart-stopping dynamic of the former (the shift from maximum intensity to minimalist ambience which occurs just before the nine minute mark never fails to get a reaction no matter how many times I hear it) or the chunky, chattering riffs and funky, retro-futuristic Prog-Jazz freak-outs of the latter, both tracks immediately showcase just how much Æthĕrĭa Conscĭentĭa have grown as a band since their debut, becoming more powerful and more progressive, yet also catchier and more cohesive.

It’s the advent of “Liturgy for the Ekzunreh”, however, where things really start to change, as the song’s strange structure and esoteric embellishments – the first half is all dreamlike ambience, hypnotic, tabla-like percussion, and wordless vocal melodies, whereas the second half is a shamelessly proggy arrangement of pulsing bass-lines, fluxing rhythms, irradiated riffs and cosmic atmospherics – signals a clear and decisive shift towards new vistas and new horizons for the band.

This sensation, that some sort of threshold has been crossed, is then made fully real by the album’s formidable two-part finale, “Absurd Crusade”, whose almost twenty five minute collective run-time really deserves to be listened to as a singular piece (but, then, I’d argue that, despite how seamlessly self-contained and unexpectedly infectious each track is – and they really are, not “poppy”, by any means, but still packed with singularly sharpened hooks and eerie, ear-worm melodies – the album in general is best experienced as one complete piece of work, from beginning to end).

Regardless of how you choose to listen to these tracks, however, there’s no getting away from how cleverly arranged, strikingly dynamic, and forcefully executed they are, from the way that “Elevation in Arrogance” weaves together passages of haunting ambience, seething intensity, and proggy indulgence, while centring several of its biggest, boldest hooks around the piercing alto-sax of White Ward’s Dima Dudko, or the simultaneously potent, poignant, and multi-faceted Prog-Metal approach which dominates and drives endlessly shapeshifting closer “Collapse in Penance”.

Whether or not the band specifically planned for Corrupted Pillars… to serve as a sort of musical meta-journey (as well as a narrative one) I’d love to know, but that’s definitely how it seems to me, and this steady transition away from the “familiar” (and I use that word only in the loosest sense) sound established on Tales from Hydhradh towards an even more diverse, and even more distinctive, style is what helps make this record such an unexpected, unpredictable, but in no way unwelcome, highlight of the year so far.