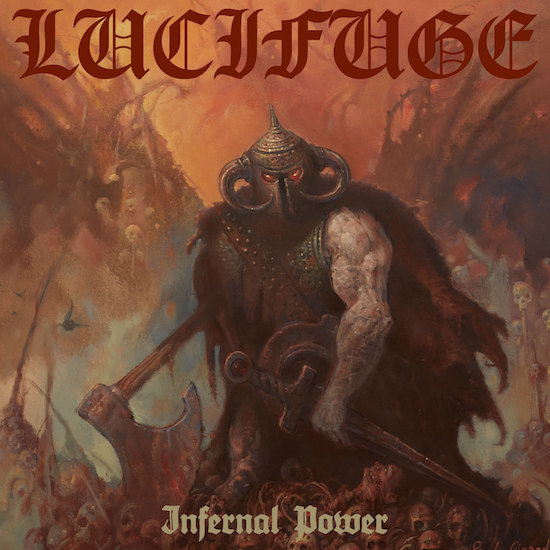 The German band Lucifuge was born in 2018 as the solo project of Equinox, who wasted no time rapidly discharging a demo, an EP, and the Ride the Beast debut album that same year. The creative fires burned just as hot and bright in 2019, resulting in two more EPs and a second album, Der AntiChrist.

And just last year, Lucifuge released yet another full-length (The One Great Curse) and a single that proved to be the title track to Infernal Power, the latest and most accomplished Lucifuge album yet, which is rapidly approaching its April 30 release date via Dying Victims Productions — and which we’re premiering today. 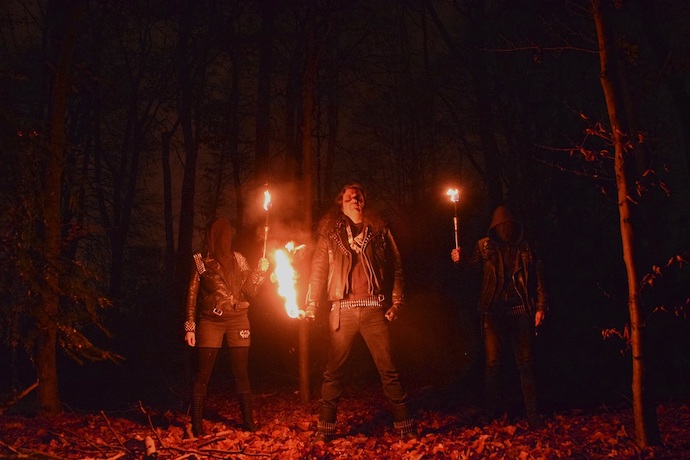 But maybe the achievement of the album that stands out the most is that for music often summed up as “blackened speed metalpunk”, each song has its own character, thanks not only to the addictive power of the riffs and the dynamism of the songwriting but also to the presence of mood-altering melodies. The melodic ingredients in the songs may come as a surprise to some, given that Lucifuge usually attacks with such wild, hellish energy — though they certainly do that here.

Most of the songs are compact, all but one of them in the two-to-four-minute range, and as mentioned earlier they’re packed with highly infectious riffs, which are usually feverish and fiery. You get an immediate dose of that kind of exhilarating energy through the title track that launches the album. The riffing buzzes and blares; the soloing is crazed; the urgently thumping drum beats and pulsating bass tones give the song a blood-rushing drive; and Equinox‘ maniacal, throat-rending screams rocket the music even further into the red zone. All in all, “Infernal Power” blazes like a bonfire that sends its flames and sparks soaring high.

Like the album opener, the other tracks feature fast rhythmic changes that include punk beats, speed-metal gallops, spasms of blasting, lurching stomps, skull-smashing back-beats, tumbling tom booms, and skipping patterns that come off as counter-points to the rhythm of the riffs. The bass work is equally vibrant, and given its own prominence in the music’s less rabid moments.

But it’s the guitar work that’s the core of the album’s infectious appeal. It creates boiling and flame-throwing sensations and gloriously frenzied harmonies, generates spurts of jittery sound like blood bursting from a severed vein, channels feelings of frightening menace and grim cruelty, and sends fanfares of sound soaring toward the heavens.

And while the fretwork is almost relentlessly fast, it does indeed create changing moods. There’s a feeling of desperation and anguish (as well as calamitous cacophony) in “Heresy Shall Remain”, moments of palpable peril and fear (as well as boiling madness) in “Beneath the Eyes of the Black Flame”, while “Black Light of The Evening Star” is grim and grand and “The Doors of Hell May Shake” is home to both a venomous, reptilian solo and an atmosphere of soaring diabolism. The album’s longest track, “Good as it is”, is a cover of a GISM track off that legendary Japanese band’s second album, M.A.N., and its comes off as a bleak, feral anthem — but one packed with a plethora of screaming lunatic solos.

Lucifuge might have ended the album as they began it — with an exhilarating riot of sound — but chose instead to create a very different bookend with “Midnight Sun” — a mid-paced track with a steady beat, a prominent bass line, and a forlorn melody. Here, the screamed vocals sound wretched and wrenching. It’s not until near the end that the song briefly accelerates, and the riffing drives to heights of pain and despair.

This really is a hell of a good album, with a lot more going on in the songs than discharges of blast-furnace heat and berserker mayhem. It definitely WILL get your motor running fast and hot, but the songs’ addictive appeal goes beyond that.

Dying Victims will release the album on CD, vinyl LP, and digital formats, and all those are open for pre-order now. Credit for the great cover art goes to the one and only Paolo Girardi.