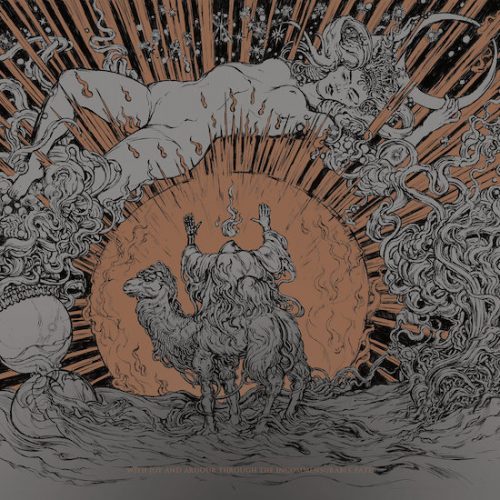 (The long-awaited debut album from Italian Black/Death duo Hadit is set for release this Friday via Sentient Ruin/Caligari Records, and Andy Synn has volunteered to act as Virgil on this journey into the inferno)

After my shameless flirtation with – dare I say it – the “mainstream” (ok, not really, but you know what I mean) earlier this week, it’s high time I got back to the underground, the underdogs, and the underappreciated.

And what better way to do so than with a quick look at the long-awaited, soon-to-be-released, debut album from Italian Death-duo Hadit, whose elaborately titled new album conjures up a sound that is distinctly more occult and “old school” in demeanour and delivery than that of the band’s more popular and blast-happy contemporaries/countrymen?

One thing you’ll quickly notice about With Joy and Ardour… (after you’re done marvelling at its sublime, striking cover art) is that, for all its scalding intensity and suffocating density, it’s not afraid of giving its songs room to breathe, so that for every catastrophic cacophony of grinding, gut-wrenching riffs and barbaric, bone-rattling blasts, there’s also something moodier, gloomier, and downright doomier – from a series of menacing, hanging chords, each one stretching out the tension a little more than the last, to an unsettling passage of hypnotic, ritualistic rhythms and agoraphobic atmosphere – waiting just around the corner.

That’s not to say that Hadit aren’t still absolutely devastating… the riffs are as foul and filthy and brimming with ominous, oppressive weight as they come, while the vocals dredge the grim, guttural depths of madness and the drums splinter and splash and splatter with visceral, almost physically palpable, force… but it’s the more, shall we say, esoteric embellishments, such as the quasi-dissonant melodies which rear their malevolent head during “A Digression and Her Eternal Domain..” or the sense of simmering, blackened menace charring the edges of “The Submission of Rage…” which serve to elevate these songs (and others) above and beyond the muck and mire of mere traditionalism.

Don’t get me wrong, With Joy and Ardour… is still steeped in tradition, owing as it does such a clear debt to acts like Incantation, Dead Congregation, and other, similarly ugly and uncompromising bands ending in -ation, but there’s also an undeniable sense that the demonic duo have their inner eyes fixed upon deeper mysteries and greater prizes than simply being praised for following in the footsteps of those who came before them.

With that in mind, then, perhaps it would be more accurate to compare and contrast this album with the works of artists – and I choose that word for a reason – such as Vassafor, Desolate Shrine, and Irkallian Oracle, whose surface-level savagery conceals a deep well of spiritual sickness and arcane horror.

And while the Italian hellions are not quite on this same level just yet – this is not, as they say, even their final form – there are more than enough signs here, both horrifying flashes and tantalising glimpses of things yet to come, to be confident that this is far from the last time we’re going to be hearing the name Hadit whispered in connection with such hideous and illustrious company.