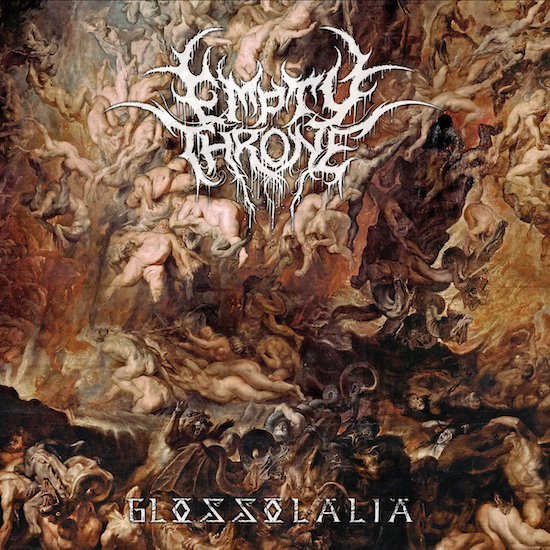 Those of us who toil at this site draw pleasure from what we do in many ways, but perhaps the most fun comes from presenting explosive surprises — helping to spread the word about new, unheralded bands whose appearance turns out to be something like a big meteor blazing through a night sky. And that’s exactly what we have for you today, in our premiere of the debut EP of the multi-state U.S. band Empty Throne in advance of its release this coming Friday by Wise Blood Records.

This EP, Glossolalia, really is a spectacular experience, one that’s perhaps best enjoyed after hyperventilating, because you may need the extra oxygen. In a nutshell (to borrow the label’s words), “this is hellish and ornate blackened death metal with thrashing rhythms and an epic scope”. It draws upon “the violent propulsion of ‘80s thrash, the agile savagery of death metal circa 1994, with Gothenburg adornments and rabid vocals”, blended with an ambitious scope and the dark atmospherics of late-stage black metal.

And it must also be said that the high-speed instrumental pyrotechnics are likely to find fans among devotees of technical death metal too. 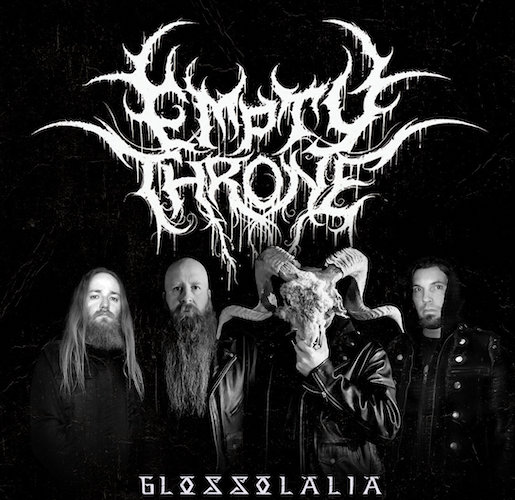 The EP’s eye-popping accomplishments are perhaps less surprising if you know who is behind this new formation. The line-up consists of guitarist Michael Joseph Pardi (Possessed, Draconis, Ritual), vocalist C.R. Petit and bassist Jason Ellsworth (both of Angerot), and drummer Gabe Seeber (The Kennedy Veil, Decrepit Birth, Abbath).

We’re told that the idea for the band came after those Angerot members met Pardi in Sioux Falls, South Dakota and learned that Pardi had a treasure trove of unused song ideas. And based upon those ‘90s-era riffs, they came together along with Seeber to write and record the three wild tracks you’re about to hear. Feel free to jump to the music stream, but here are my further attempts to introduce the songs:

Chilling whispers and abyssal bestial intonations, against a backdrop of eerie, chilling ambience, provide the introduction to EP opener “And All Shall Know His Name“. — which leads into a fusillade of rapid-fire percussion, bubbling bass lines, and writhing, darting riffage, whose rabid pulsations and squirming contortions generate a feeling of mad, whirling ebullience — coupled with the unhinged savagery of the roaring and screaming vocals. But the band also take opportunities to bludgeon with pile-driving power and eviscerate with cruel and cutting tremolo’d savagery.

It’s an explosive and head-spinning combination that gets the blood rushing fast and furiously, and the jackhammering sequence near the end, in which the chords blare and the arpeggios quiver in a fever, will give your neck a good workout too — as a prelude to a final paroxysm of wild decimating exultation.

Cleverly, the band follow the fireworks of that first track with an intro sequence to the next one, “That Day Has Come“, which employs mysterious piano keys and mystical ambience. But you’d better take your breaths quickly because the volcano soon erupts again, as the band blast out another discharge of blistering drum munitions, spidery fretwork, and utterly crazed vocals whose frightening lunacy is matched only by their no-holds-barred ferocity. The band do throw some twists and turns into this deranged escapade, including a little bass solo that provides a break in the rush of bewildering, fleet-fingered guitar machinations and skull-plundering percussion, as well as a passage of eerie, ominous, sweeping splendor in which roars and chants cascade in waves, much like the music.

There’s a feeling of bleakness and misery at the outset of the final track, “My Flesh The Temptation“, and the music seems to swing and dance while simultaneously generating a feeling of anguish, and the riffage somehow feels beleaguered and bereft despite how blazing fast it is. The music reaches heights of frenzy, but almost never relents in its atmosphere of deep dread and dire hopelessness, even when the music becomes especially cold and cruel — except when a scintillating solo and effervescent arpeggios create a momentary feeling of joy in the midst of this morphing maelstrom of sound, and, near the end, when the band create mesmerizing threads of fluid melody after having reached a zenith of mind-boggling fretwork ecstasy.

Wise Blood will release Glossolalia on CD, cassette tape, and digital formats, and recommends the EP for fans of: At the Gates, God Dethroned, Dark Tranquillity, Carpathian Forest, and Nifelheim.

One Response to “AN NCS EP PREMIERE (AND A REVIEW): EMPTY THRONE — “GLOSSOLALIA””