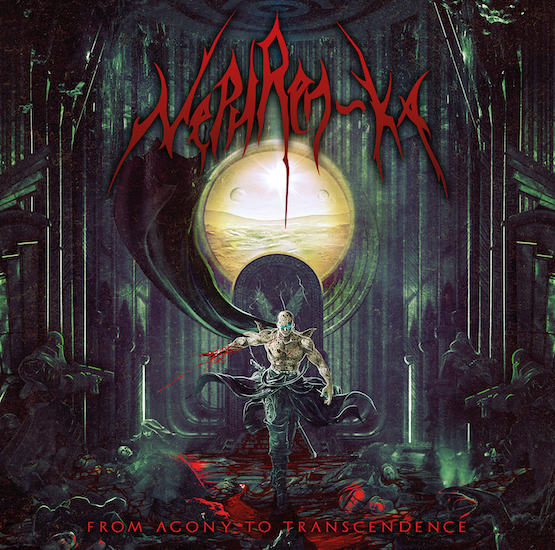 It would seem like a paradox to most people (though not to many of the fiends who visit our site) that music which violently and ruthlessly assaults the senses can fuel a feeling of outlandish fun (as well as triggering a big discharge of adrenaline).

When riotous, high-speed brutalization is inflicted with no care for restraint or mercy, it can become terrifically exhilarating rather than repellant — at least when the experience is created by technically skilled executioners and diabolical songwriters. Even better when it becomes apparent that subtle structures and seductive accents exist within the explosive chaos, so that you feel the compulsion to have the experience again and again — and find even more to like about it with each renewal.

All of that is true in the case of “L’Abomination“, the song we’re premiering today from the forthcoming third album by Nephren-Ka, From Agony To Transcendence, which will be released by Dolorem Records on June 25th. 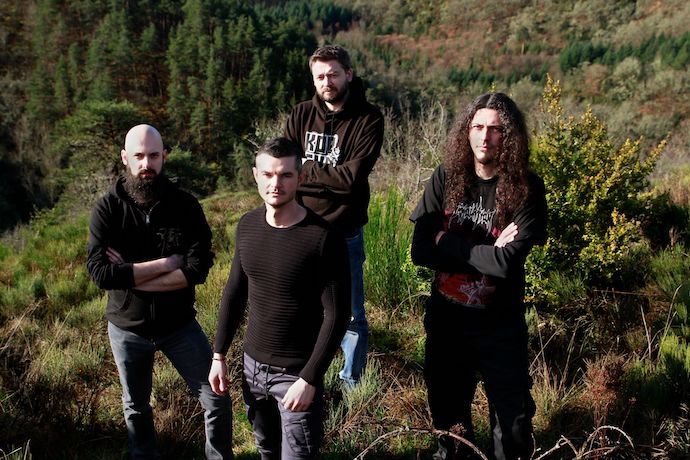 Many of you will already be familiar with the kind of electrifying musical decimation of which this French brutal death metal band are capable, but for those who are not, this new album will be a great way to catch up. And for those who may not know much about the band, they have the further appeal of crafting their lyrics exclusively based upon the works of Frank Herbert’s Dune novels. The new album, for example, deals with plots and intrigues for the recovery of the Golden Lion’s throne based on the book The Children of Dune, and the path that will lead Leto II to become the Emperor God of Dune. Good timing, given that many of us are already panting over the prospect of Denis Villeneuve‘s forthcoming Dune movie.

As you will discover from the lyric video through which our song premiere is being presented, the lyrics are in French, but the inability of non-French speakers to decipher them will not detract from the visceral thrills of “L’Abomination“.

In a nutshell, “L’Abomination” is unmitigated sonic warfare. The drumming changes, but nearly every manifestation sounds like the discharge of some kind of heavy-caliber weaponry at varying rates of fire. With the drums given a prominent place, the low end is a non-stop bowel-loosening upheaval, punctuated by booming jolts, while the riffing generates a swarming mass of corrosive, down-tuned mayhem — segmented by bursts of darting fretwork mania and brazen blasts of cruel, magisterial chords.

In the midst of this ruinous high-tech warzone a pack of unhinged beasts ejects the lyrics in rabid roars, snarls, and shrieks. The lead guitar can be heard to squeal and scream within all these storming sounds, but finally takes the spotlight in a spectacularly freakish solo near the end that’s riveting in its morphing, alien sensations.

And yes, it really is a lot of fun despite — or more likely because of — the over-the-top violence of the assault. And it just gets better the more often you listen.

The new album delivers nine brutal original songs plus two bonus tracks — a cover of a Massacra song that will be included on the CD edition of the album, and a cover of Pantera on the digital version.

It was mixed and mastered by at 16th Cellar Studio by Stefano Morabito, and features eye-catching cover art by the French artist Stan W. Decker.

Dolorem Records will release the album in CD, LP, and digital editions, which are available for pre-order now. The label recommends it for fans of Origin, Hate Eternal, and Nile.