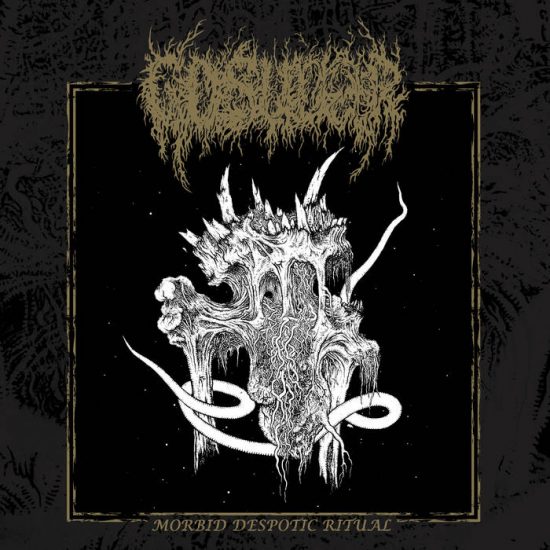 When I saw the description of Gosudar’s debut album provided by Rotted Life, the Maryland-based label that will release it on May 28th, I figuratively smacked my lips in anticipation:

“With gut-churning vocals and seasick serpentine riffage, Gosudar wind their way through twisted, psychotic arrangements, while never sacrificing their oppressive heaviness for technicality, nor disregarding the sheer power of a razor-sharp hook. It’s a cyclonic style of death metal chaos crucial for fans of Dead Congegration, Mortiferum, and Incantation“.

But of course one can never know how well such enticing previews will match up with the actual sounds until diving into the music itself. Fortunately, in the case of Gosudar’s Morbid Despotic Ritual, they turn out to ring true. This Moscow-based trio have created something special that really will appeal to fans of the afore-mentioned groups, and the song we’re presenting today, “Insurrection of Nephilim“, is powerful evidence of that. 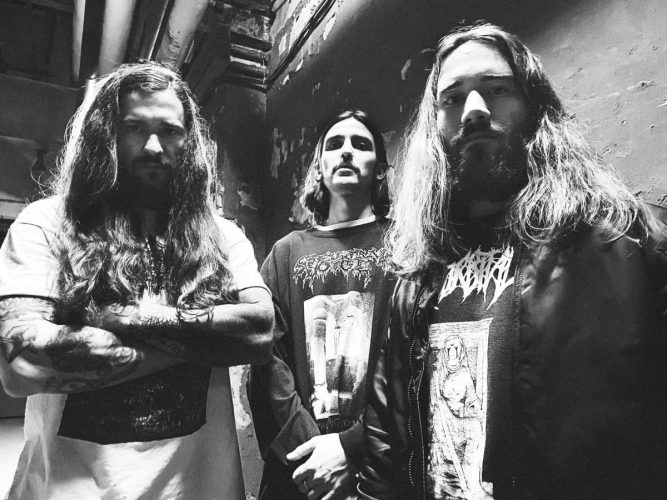 The song presents, in dynamic fashion, an experience that’s groovesome and gruesome, crushing and crazed, steeped in dread and despair, dictatorial in its cruelty, and frighteningly supernatural in its atmosphere. Indeed, the title of the album effectively describes the sensations of this particular song — it is very much a morbid and despotic ritual.

The track is packed with changing riffs and leads, which include grand magisterial chords, bursts of squirming fretwork frenzy, and effusions of pulsating madness. The guitars buzz and swarm with cruel, corrosive, mind-mangling effect and erupt in electrifying paroxysms. But they also emit long, deep, groaning exhalations and shrill, eerie, spiraling and quivering, tones, as well as lonesome ringing notes — and all of that together creates a frightening atmosphere of unearthly wonder and oppressive claustrophobia.

In partnership with those changing experiences, the drumwork morphs rapidly, but with a persistently skull-cracking impact, shifting the tempos and rhythms from steady marching punishment to head-long gallops and riotous battering assaults and (in the closing minute) to brutal, jackhammering destructiveness. And the vocals are entirely fitting for this kind of ghastly death metal, delivering the lyrics in horrid abyssal growls which elevate into harrowing screams.

Morbid Despotic Ritual was recoded and mixed by Alexander Sarychev, and it was mastered by the veteran Dan Lowndes at Resonance Sound Studio. The album features cover art made by Nestor Povarnin, and Rotted Sound will release it on LP, CD, cassette tape, and digital formats

In case you need further persuasion, we’ve also included a stream of the previously released track, “Awakening of the Realm“.