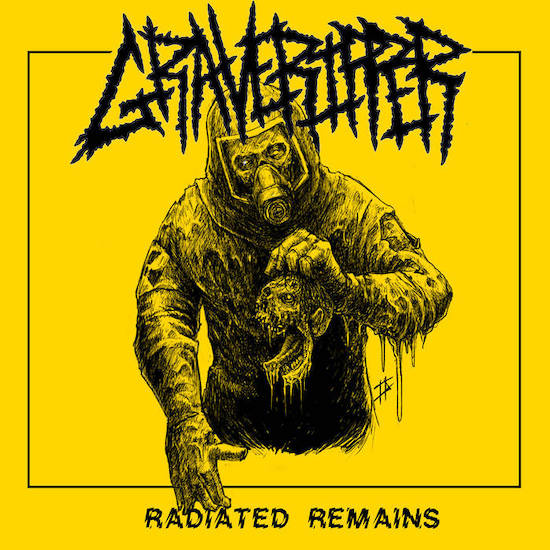 Indiana’s Graveripper are open and obvious in their admiration of Germanic thrash, but equally attracted to the stylings of early Norwegian black metal, as well as the rollicking riots of first-wave black metal. As the band’s founder, vocalist/guitarist Corey Parks has quipped, “We’ve described ourselves as if Exodus and Kreator had a kid and Immortal babysat frequently. We’ve received comparisons to Venom, Toxic Holocaust, and Skeletonwitch, which I can see. I think there is a lot of Midnight in there, and bands like Bonehunter, Bewitcher — all that.”

Of course, it’s one thing to tick off all those influences and another thing to witness how well Graveripper have drawn together the ingredients of ’80s death/thrash, blackened speed metal, and savage rock ‘n’ roll — while also incorporating dark and memorable melodies so seamlessly into their blood-rushing onslaughts.

And witness it you shall, because today we’re presenting a full stream of the band’s explosive and moving new EP, Radiated Remains, the day before its release by Wise Blood Records. 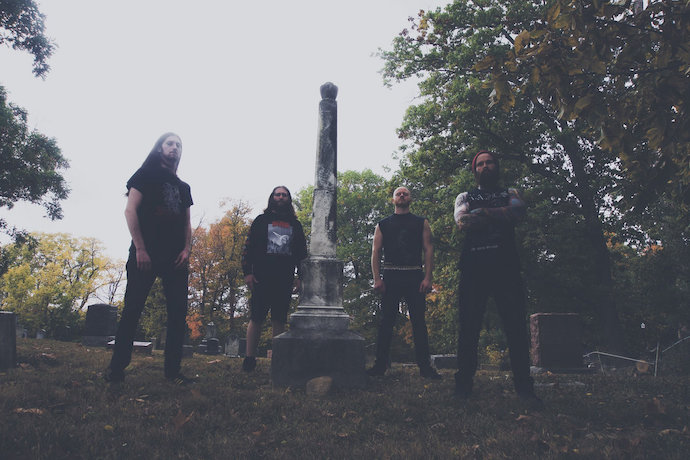 This really is a damned fine six-song EP. The tracks are uniformly fast, ferocious, and explosive, but it bears repeating that each song is also home to gripping and memorable melodic accents that give each one a strong emotional impact, which is part of what makes them all so contagious. The fact that all the performers display top-shelf skill while flying at the speed of rockets just elevates what they’ve done here to an even higher level of achievement.

The brief, ponderous introductory movement of “Instinctive Extinction” is the only real chance you’ll have on the EP to take any deep breaths — and you should use the chance, because from there on it’s a nearly non-stop adrenaline rush.

The rush begins with “Atoms Divide“, a melodically multidimensional and relentlessly pulse-pounding song. It delivers a blast of racing and razoring riffage combined with vivid pulses of brazen sound and eerie, desolate guitar reverberations over hammering percussion and livid bass thrums. Corey Parks‘ vicious, scalding snarls further amplify the savagery — but, in addition to creating exultant hell-fire barbarism, the song also manages to fashion moods of otherworldly mystery and predatory menace, as well as a feeling of dismal hopelessness.

“Atoms Divide” establishes the template for the rest of the EP. “All Life Decays” is another turbocharged rush, with riffs that jolt, jab, soar, and scream. It’s also a powerfully head-moving barrage, but the racing momentum does briefly slow and stalk, to make way for a feverishly darting guitar lead and another gripping guitar melody that surfaces later in exhilarating fashion.

“Cherenkov Light” serves up a hell-for-leather thrashing gallop, with a wild darting lead that becomes even more wild as the song evolves, segmented by jackhammering grooves, long desolate chords, and bereaved soloing, while “Complete Blinding Darkness” is both a jet-fueled race and a head-moving rocker that features blaring chords, coupled with rapid-fire fretwork and a burst of soloing fireworks.

To cap off this terrific EP, “King Killer” combines rapidly undulating bass lines, crazed fretwork machinations (which are as ebullient as they are maniacal), and another spine-tingling dose of rabid vocals. But once again, Graveripper make their attack melodically memorable, introducing desperate, gripping tremolo’d melodies with a grief-stricken mood, to go along with thunderous double-kicks, blast-beat flurries, and neck-ruining rhythms.

The lineup of Graveripper is fleshed out by second guitarist Keegan Hrybyk, bassist Chris Pilotte, and drummer Jacob Lett. They should all take a bow.

The EP was mixed by Carl Byers (ex-Coffinworm) and mastered by Toxic Holocaust’s Joel Grind. As a special bonus, Graveripper have added their blistering three-track debut EP, Complete Blinding Darkness, to the first limited edition run of CDs and cassettes for this new release through Wise Blood Records.

One Response to “AN NCS EP PREMIERE (AND A REVIEW): GRAVERIPPER — “RADIATED REMAINS””