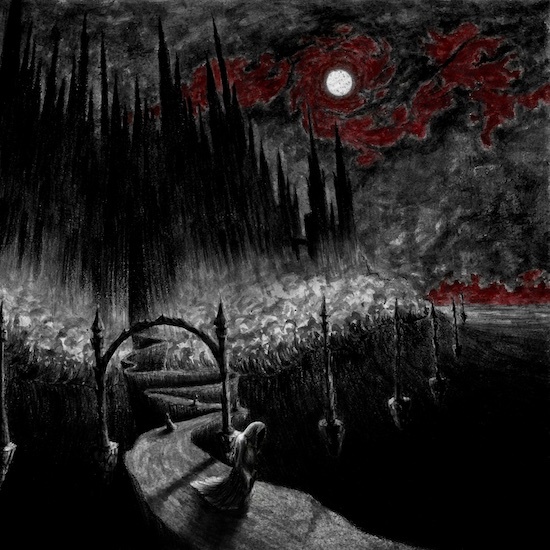 Following up their 2016 debut EP Light the Torches, the German black metal band Fiat Nox will release their first album on June 25th through The Crawling Chaos Records. The album’s well-chosen name is Archive of Nightmares, and today, in a rare Sunday premiere for our site, we’re presenting a stream of the title track.

The label describes the album this way: “At the spiritual core of the music lies the profound and abysmal side of man, as he – inextricably bound to a world ensnared in perpetual descent within the maw of night – cannot but revel in negativity”. Those words are equally well-chosen, because the music is itself abysmal, but revels in madness. The song we’re premiering today is a great example of the band’s sinister powers, presenting a multi-faceted work that’s hallucinatory, hopeless, tormented, and viscerally pulse-pounding. 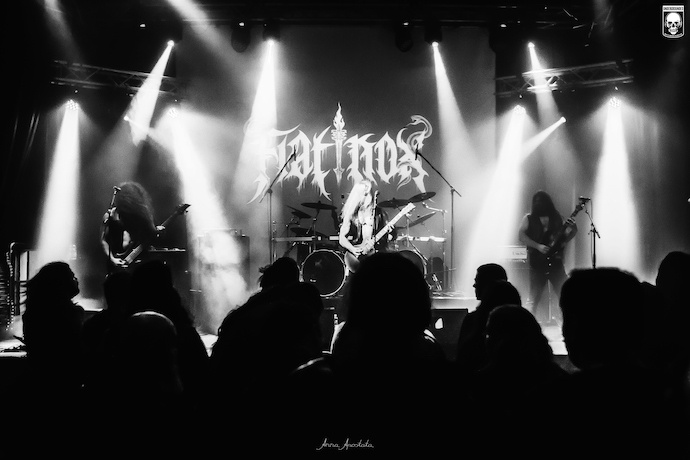 At 10 minutes in length, “The Archives of Nightmares” gives Fiat Nox the time to develop a twisting and turning labyrinth of sound that turns out to be strangely bewitching as well as intensely disturbing.

A light, glimmering guitar and a steady drumbeat lead the song into sounds of increasing tension and turmoil. Those sensations derive from heart-pumping chords and from guitar leads that feverishly ripple and wail in anguish, accompanied by a cacophony of gargoyle vocals — an amalgam of gravel-throated roars, savage snarls, and wrenching screams. The band send those feelings of tension and torment to higher levels through flurries of blasting drums and roiling, spiraling riffage whose sound is desolate and deranged, while segmenting the excursion with booming jolts.

About halfway through, the song changes again, with a rocking groove and a slashing, head-moving riff, which set the stage for a fleet-fingered, flamethrowing solo. That new segment has a feeling of feral, carnal ecstasy, but further changes lie ahead. The music slows into a phase of chiming, misery-soaked guitars, widely spaced percussive bursts, and gloomy spoken words. That ringing guitar motif cycles over and over, burrowing into the listener’s head, even as the drummer pulls the trigger on another hammering paroxysm, and even as the drums vanish near the end….

The Crawling Chaos will release this very impressive debut album on CD and digital formats. The fantastic cover art was created by Hellish Visions. Pre-orders will begin this coming Friday at the label’s Bandcamp and webshop.

TRACK LIST:
1. A Thousand Conquered Thrones
2. I, Ascendant
3. Triumph
4. Journey To Yuggoth
5. The Ophidian Fire
6. The Archive of Nightmares