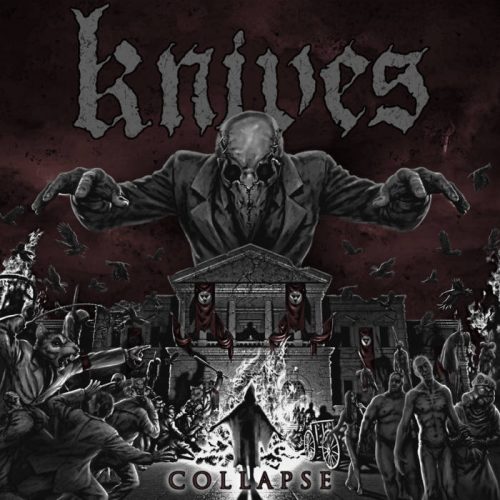 In February of this year the band Knives from Bilbao, Spain, released an explosive new record named Collapse. In advance of that release we featured its first single, “The Unknown“. With lyrics that expelled politically charged fury in blisteringly furious tones, that song melded punk cadences and bone-grinding riffs delivered with massive, chainsawing distortion, and coupled that with bursts of blaring melodic defiance and feverish bass outbursts, as well as a hellish breakdown.

That opening single truly was an electrifying discharge. But the balance of the tracks on Collapse proved to be equally thrilling, albeit in somewhat different ways. For example, the opener “Martyr” begins in soul-stricken and haunting fashion but then becomes a rain of megaton warheads, and then a fierce, galloping charge, and then a spasm of violence. It will give your spine a vigorous jolting, but also includes spit-fire soloing and the kind of rocketing, sky-high melodic riffing that gets hearts pounding.

And from there the band used Collapse to elaborate on their riveting brand of death/punk from one track to the next, bringing to bear one crusher after another, deploying humongously heavy chugs, incendiary leads, blood-spraying vocals, and gripping melodic accents (both grim and glorious) that keep the emotional intensity in the red zone.

Today it’s our pleasure to premiere a video for yet another song off Collapse, one entitled “Was It Worth It?“, which we hope will introduce still more listeners to Knive’s tumultuous talents.

The song in the video is full-throttle mayhem, from the hair-raising, ear-shredding screams to the dissonant, nerve-needling guitar tortures that periodically burst from the song. The music is also bone-smashing, thanks to the mauling, heavyweight impact of the riffage, the thundering bass lines, and the skull-plundering drumwork, which includes varieties of hammering brutality.

Maybe someday soon Knives will again be able to stir up a frothing mosh pit with this song, but until then the video does a very good job capturing the adrenaline-fueled intensity of the band’s performance.

The band themselves were responsible for the original idea, the art concept, the direction, and the recording and editing of the video. It was filmed at The Infected Room.

In case you’re just now discovering Collapse, we’ve also included a full stream of it below. It’s available on vinyl, CD, and digital formats via Bandcamp.