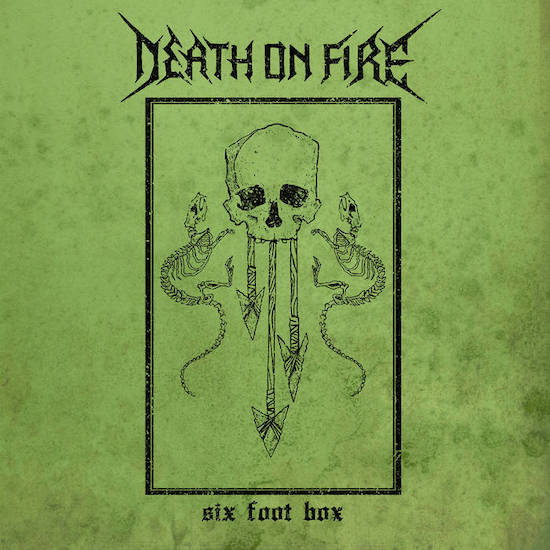 For just a three-track EP, Death on Fire‘s Six Foot Box is a vibrantly diverse and dynamic experience that manages to hit home in multiple ways. After reaching the end, it’s really easy to loop back around to the beginning, to re-live the experience and try to get a better understanding of how the band managed to provoke such a reflexively visceral and physical response while simultaneously moving emotions in such different and powerful ways. By then, the songs have just dug their hooks deeper under the skin, even further strengthening the desire to go back to them.

You can pick out songwriting and recording techniques (and a dark world-view) that flow across all three tracks, but trying to dissect and enumerate all the stylistic strains in the music (which seem to span about five decades of rock and metal history) is a much more difficult task, though probably easier if you’ve got some gray hairs in your head. It’s better to just appreciate how well this Indiana band have integrated the sounds that inspired them.

What we have for you today, in advance of the EP’s July 16 release, is the premiere of the EP’s second track, “A Hell of Our Own Design“. It now joins the closing song, “Begging For Air“, as publicly available streams — but we’ll also give you a written preview of the EP opener as well. 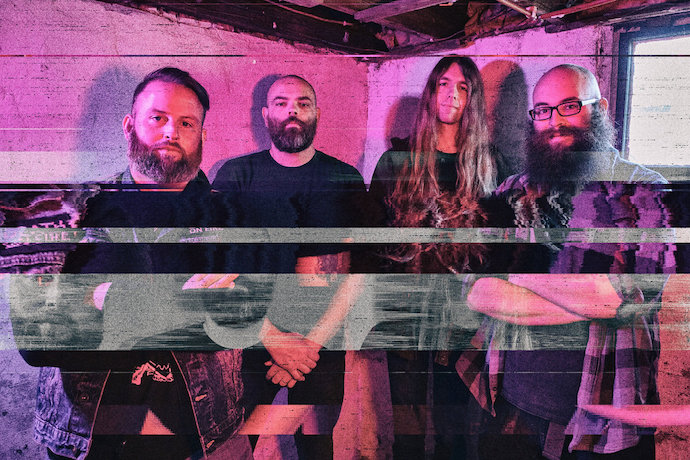 When you hear the first song you’ll understand why the band chose the second and third ones for premieres, but the attraction of the EP as a whole is even stronger when you begin at the beginning and see how it unfolds from there. That still-hidden opener, the title track, is a haunting piece of music. Slow, dissonant, clanging chords at the outset sound like plague bells, joined by anguished leads and gloomy, gothic vocals that veer into sounds of unnerving intensity. When the bass and drum arrive, they’re stately and steady. The guitars soar in their grief, and a bluesy solo soulfully translates sorrow into sound. Apart from the harsh vocals, the song is more in the vein of dark folk and rock than metal.

After that, in the track we’re presenting today, the band make a sharp and electrifying turn. “A Hell of Our Own Design” is a head-moving, hard-driving, high-voltage song that manages to channel frenzy, despair, viciousness, and hallucination. Propelled by vibrantly pulsating bass lines, neck-cracking snare rhythms, and bubbling double-kicks, it includes a changing panoply of swirling, skittering and darting fretwork, and the channel separation of the guitars makes that experience even more interesting.

There’s a lot of variety in the vocal department too, which includes savage snarls, roaring growls, spine-tingling screams, and — in the chorus — a duet of harsh vocals and almost-clean singing. The band also weave into the song bursts of demented, screeching strings, cold, needling riffage, jolting grooves, and eerie, wailing melody.

The band offered this comment about the track we’re presenting: “Super humbled to have NCS premiere this track for us! ‘A Hell of Our Own Design’ is a fun and aggressive track about people’s lack of compassion and foresight. We create all of these problems and don’t care about anything unless it directly affects us. We are our own problems and hells and we force others to live through it.”

And then comes the closing track, “Begging For Air“, which seems to tie back to the title track with a slow, ghostly arpeggio steeped in misery, but then connects to the preceding track when the band hit the gas. The energy surges with pulse-pumping, darting, inventively harmonized riffing that proves to be highly infectious. The soloing is both exotic and fiery; the vocal variety (including what happens in the chorus) is still on display; and the dual-guitar progressions still alter the moods in striking ways.

Well, I guess it’s obvious that I’ve really been enjoying this little EP, and hope it will strike a chord with you too. It’s available for pre-order now.