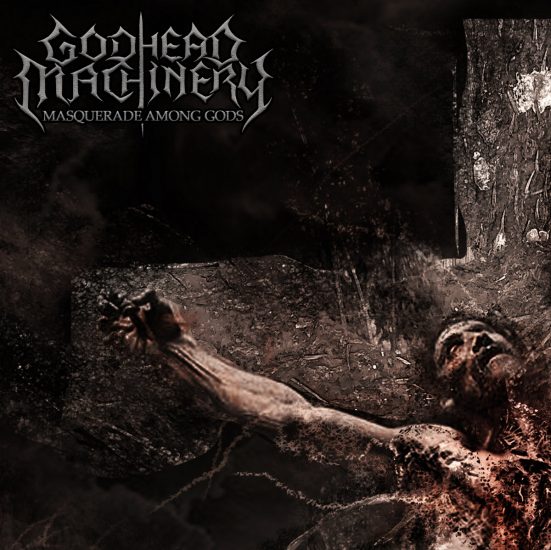 With two albums to their name released by Inverse Records — Ouroboros (2017) and Aligned to the Grid (2019) — and work now beginning on a third full-length, the Swedish extreme metal band Godhead Machinery will be releasing a new EP on July 2nd through Black Lion Records, and we have the pleasure of presenting it in its entirety today.

Sometimes in the space between full-length releases a band will record an EP as a “filler”. In some cases you get the sense that a group just wants to remind fans that they still exist. But in other cases, and this is one of them, the EP represents a serious work, with just as much dedication to composition, performance, and emotional impact on the listener as you would find in a full-length endeavor. In fact, when the work is done as well as Godhead Machinery have accomplished on Masquerade Among Gods, the intensity of that impact might even exceed what could be achieved through more tracks and minutes. 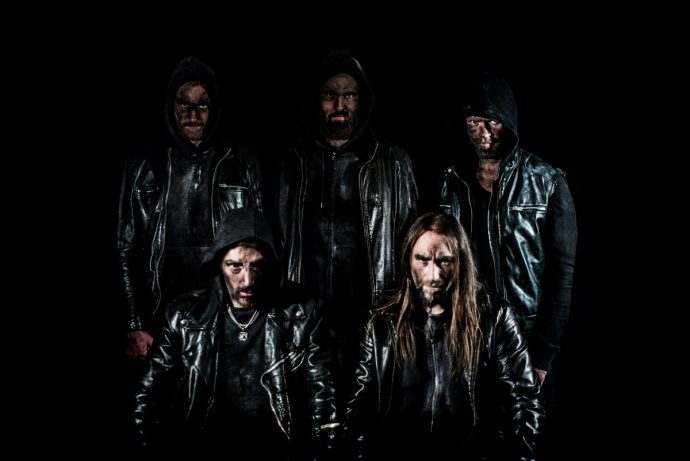 Through the four songs on this EP, when absorbed straight through, Godhead Machinery have created a truly harrowing and haunting experience. The music is multi-faceted and intricate, revealing (in the simplest of genre terms) an amalgamation of black, death, doom, and progressive metal that’s capable of generating visions of frightening calamity, earth-shaking upheaval, and terrible grandeur, but also casting mesmerizing spells and plunging the listener into moods of soul-shaking sorrow.

Rather than sounding like something thrown together quickly, the EP is elaborately plotted and meticulously performed, and creates a sense of a unifying vision that holds together from start to finish despite all the twists and turns. And it is indeed a harrowing vision constructed on a grand scale, commensurate with the band’s themes: “The conception of both the EP and upcoming album spawns out of what Godhead Machinery stands for in general: a tool to analyze how religious beliefs infiltrate laws, policy, behaviors, and moral codes of today’s society”.

And now for more thoughts about the EP’s four songs, though of course we wouldn’t blame you for skipping down to the player below and diving right in.

In its opening moments “Magna Mortalitas” offers glinting clean guitar notes and a musing bass line, joined by scary, crypt-like vocal reverberations. It’s a mysterious and inviting prelude, but although the band carry that seductive melody forward, things soon get much heavier and more frightening, thanks to punishing drum blows, scalding vocal vitriol, and writhing guitars whose sounds are simultaneously beleaguered and deranged. The intricate instrumental interplay, noticeable because of the clarity of the production, seizes attention while also building an atmosphere of supernatural malignancy and desolate hopelessness. The song eventually boils over in an unnerving maelstrom of hammering percussion, crazed vocal expulsions, frantic darting leads, and momentous heaving chords.

The band follow that striking opener with the massive and mauling “Upon His Deceitful Star“, which generates feelings of towering infernal eminence, segmented by bursts of grinding bass and battering drums. As ever, the vocals are a shrieking and roaring nightmare. The pestilential buzzing of the riffs and the flickering of the leads inject poison into the ears and madness into the mind, while a fluid guitar solo channels abject misery, and soaring sounds maintain the song’s aura of blood-freezing grandeur.

On “Vulture Excarnation” the band return to the strange seduction of clean guitars, this time backed by rampantly tumbling drums and joined by eerie, layered harmonies. The music twists and turns in labyrinthine fashion, anchored by huge booming grooves, becoming both funereal in its gloom and fiery in its feverishness, with drums blasting at lightning speed and enormous waves of bleak melody washing across that percussive torrent like a deluge of tragedy and pain. The effect is near-overpowering, and made even more heart-breaking by the tear-stained gleam of the leads. It’s as if a broken humanity is crying out for some sign of relief in the midst of an apocalypse.

And at last comes the title track, which torques the tension even further, the drums blasting immediately, the guitars twisting in agony, the vocals screaming, crying out, and bellowing in expressions of blinding torment. As the song contorts and convulses, with rhythmic patterns constantly changing and the multi-textured guitars weaving an array of frightening spells, there is again a feeling of abject abandonment and fear on an epic scale.

Black Lion will release the EP on digipak CD limited to 300 copies, and digitally

Below, in addition to the full EP stream, we’re including the lyric video for “Vulture Excarnation” and a video of uber-talented session drummer Krzysztof Klingbein performing a drum playthrough of the EP’s title track.