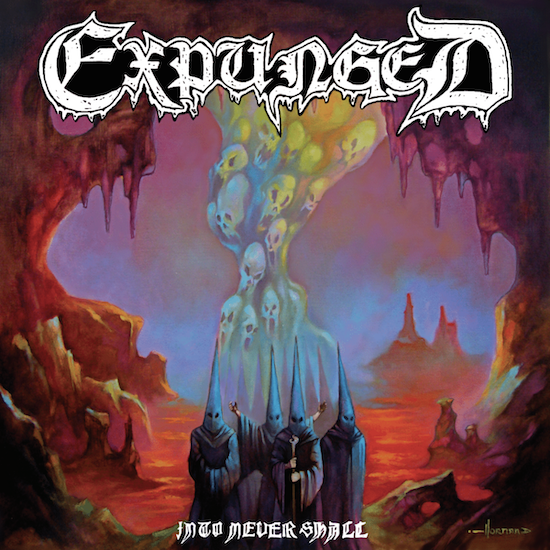 The roots of death metal grew from rotten soil, and from its earliest phases there has always been an attraction to supernatural horrors. That attraction is vibrantly evident in the debut album of the Canadian band Expunged. But the creation of ghastly visions isn’t the only thing Expunged are very adept at doing on this new record. They also sound like a massive tank attack that’s capable of bringing crushing heaviness along with cemetery nightmares.

This new album, entitled Into Never Shall, will be discharged on July 30th by Hells Headbangers, and it’s being strongly recommended for fans of Nirvana 2002, Carnage, and especially Bolt Thrower. As proof that those references are entirely appropriate, and as a demonstration of the amalgam of humongous and horrifying sounds referred to in the preceding paragraph, today we present the album’s closing track, “Stolen Life“. 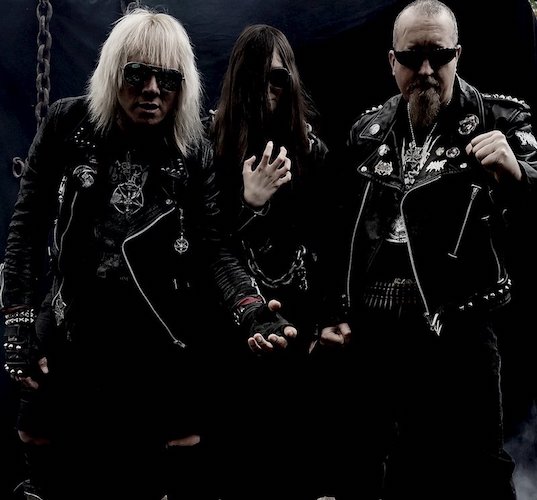 By way of background for those who are only now discovering Expunged, the band is the brainchild of guitarist W.D., who’s previously handled the axe in Dead Soul Alliance and Evolution Fail stretching as far back as the mid ’90s. When the band came together in 2019 he was joined by drummer K.F. (from old-school death metallers Töteblut) and by J.S. (AKA Jo “Steel” Capitalicide from Ice War) on vocals and bass. Those three created Expunged’s self-titled debut EP, which Hells Headbangers released last year. On this first full-length, the band now features drummer A.K.

Lots of things stand out in the song we’re premiering today, perhaps first and foremost being J.S.‘s truly gruesome and gargantuan growls, which are laced with retching verbal expulsions that give the sound a noxious as well as harrowing impact. But the song’s electrifying impact also draws power from its dense, cruel, chainsawing riffs and its weird, writhing and screaming leads, as well as the visceral momentum of the drumming.

When the drums kick into a frantic gallop, the riffing grows even more maniacal and mauling, but still punctuated by vicious percussive hammer blows. Feverish, supernatural-sounding solos and episodes of massive stomping chords add to the song’s ruinous and ravaging impact.

In the player below you’ll also have a chance to stream the previously released track “Early Tragic End“, which is further proof of Expunged’s ghastly and bone-mangling powers. You’ll also be able to watch the video for that same song.

As you’ve already seen, the album features fantastic cover art, courtesy of French fantasy novel painter Normand Didier. And the band worked with Topon Das (Fuck The Facts) at his Apartment Two Studio in the production of the music.

Hells Headbangers will release the album on CD and digital on July 30th, and a vinyl edition will come at a later date.