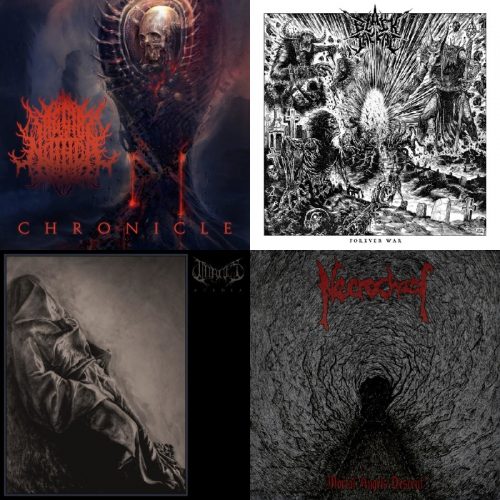 Hands up if you’ve heard of “Brutality’s Paradox”? You know the one. The rule that says that, after a certain point, the more a band tries to stand out from the crowd by being more brutal, more technical, more aggressive, the more they end up all sounding exactly the same.

There are, of course, exceptions to this rule, but – generally speaking – the best way to avoid falling into this trap is to remember that speed and/or skill are no substitute for actual songs… even if those songs have all the subtlety and nuance of a concrete rhinoceros.

Case in point, while Aegis of Nothos are clearly more than happy to wear their respective influences on their collective sleeve(s) – if these guys’ closets aren’t full of Aborted, Suffocation, and Decapitated merch (with maybe a few Soreption shirts, and a smattering of Deathcore swag too) I’ll eat my own head – it’s also just as clear that they’ve put a great deal of effort unto ensuring that each of the songs on their debut album has their own internal identity, even if the overall product isn’t 100% original (but then what/who is?).

In fact, one thing you’ll quickly notice about AoN is that, despite billing themselves as “the fastest Technical Death Metal in Scandinavia”, they aren’t all “blast, blast blast, shred, shred, shred”.

Don’t get me wrong, there’s still a lot of that going around – there’s no denying the hyper-adrenalised intensity which drives “Into Annihilation”, for example, or the almost inhuman velocity the band achieve during songs like “Hail the Nail” and “Pollution” (with the latter hitting almost Archspire levels of velocity at points) – but it’s the band’s willingness to introduce just the tiniest dose of dynamic, a dash of sinuous melody here, a splash of hefty groove there, and even some occasional slow (and slammy) parts, which really stood out to me.

Of course, there’s still some definite room for improvement, since a lot of the songs do share a relatively similar structure – blast-fuelled blitzkrieg followed by flashy solo section ending in a gut-churning chug-a-thon – but this is still early days for the band yet, and considering the fact that they’re already putting out tracks like the rifftastic “War”, the thrillingly frantic (and unexpectedly hooky) “The Dead Sustain Us”, and climactic core-heavy crusher “Necropolis” (supposedly a bonus track, but still one of the best here), I think it’s safe to say that this is one band well worth keeping an eye on.

You know how it is… no matter how Progressive or Technical or Avant-Garde your music tastes become, sometimes you just want something filthy, nasty, and unequivocally Metal as fuck.

Well, my friends, allow me to introduce you to Black Jackal and their debut album, Forever War.

Actually, no, scratch that. These guys are the type of band who don’t really need an introduction.

Suffice it to say that if you’re interested in a primo slice of unpretentious, unapologetic, and unabashed Black Thrash – the sort of album whose one and only goal is to provoke multiple bouts of concussive headbanging and whiplash-inducing windmilling over the course of just over thirty minutes – then this one is for you.

Oh, you want more than that?

Well, at the risk of spoiling you (but, hopefully, not spoiling your enjoyment of this record), I can tell you that every one of these tracks, without exception, is a devilish delight in its own way, kicking off with the opening triptych of the riff-happy title-track, the spitefully blackened strains of “The Outer Dark”, and the hellishly hooky “Bloodgate” (which has quickly become a common and unquestionable favourite around the NCS offices).

This opening burst of energy is no fluke either, as the songs which follow – from the head-bangin’, hip-shakin;, horn-raisin’ swagger of “Strike of the Whip”, to the frantic fury of “Necrolith” (and, no, I’m not going to describe every track, as I want to leave you at least some surprises to discover on your own) – all possess, individually and collectively, more than enough electrifying power and shit-kicking attitude to light up an entire city block.

And, perhaps just as vitally, whereas a lot of these sorts of down ‘n’ dirty amalgams – is it “blackened” Thrash Metal, is it “thrashy” Black Metal, is it “thrashy, blackened” Speed Metal? – end up sounding, whether by mistake or design, a little thin to my ears, this particular album has both a pleasingly punchy low end and a nice line in beefy bass lines, which together help give killer cuts like “Extermination Front” (probably the record’s heaviest and most aggressive number) some real heft and power under the hood.

Ultimately, Forever War is the sort of album that proves that not everything has to be serious and po-faced and drowning in drama… sometimes all you need is a thirty minute thrill ride that leaves you breathless and bloody and begging for more.

Let’s not beat around the bush – this is one of the best debuts I’ve heard this year.

ThisPolish band’s particular brand of Atmospheric Black/Death Metal (note that I didn’t call it “Blackened Death Metal”, because that tag suggests a certain sound that would be misleading here), is heavy in a way which suggests aphysical, palpablepresence, one which recalls the moody menace and sinister synaesthesia of bands like Schammasch and Panzerfaust.

Of course, Inanes aren’t quite on that same level just yet, but theirs is already an extremely tangible and visceral sound, one which you can practically taste, and touch, and which favours the sullen slow-burn over the sudden explosion, allowing this steady escalation of atmosphere and anxiety to simmer and boil until it reaches a fever pitch over the course of each of the album’s five tracks.

These are songs which unfold at their own pace, and no-one else’s, from the way that “Apotheosis” teases out the tension with its chiming notes, brooding vocals, and intricate percussive patterns, to the manner in which the heavy, hypnotic vibes of “The Underdark” periodically opens up to allow the entire ensemble to breathe – if only for a few tantalising melodic moments – before descending once more into a moody morass of gloom-shrouded grooves and dark, distortion-powered riffs.

“Deathcult” is the shortest and most intensely aggressive track on the album, one which shows off both the band’s impeccable riff-craft and their impressive ability to twist even the most simple and straightforward rhythms into something more unusual and unpredictable, while the ringing melodic notes and rumbling bass lines permeating the trance-inducing grooves of “New Heresy” grant the track an even richer sense of sonic texture, which is then further augmented by the song’s mix of sung, snarled, and semi-spoken vocals.

Concluding with the monstrous metallic, asphyxiatingly atmospheric strains of “Lost” –whoseintoxicating blending of bombastic riffs and bleak melodiesshowcases the band at both their heaviest and most haunted – there’s simply no doubt in my mind, that, with the right pushAcedia could help Inanes establish themselves as a future force in the Extreme Metal world.

It’s just got that sense of vision, that totality of ambition and execution, which many more well-established acts are still trying to capture, and while I have no doubt that Inanes will go on to bigger and better things, the fact is that they’ve already made their mark here with me.

But whereas the opening entry was firmly on the techier and more “modern” end of the scale, Mortal Angels Descent is an altogether nastier, gnarlier affair.

Heavily (and admittedly) indebted to the works of Incantation, Vital Remains, etc, the band’s sound is sickeningly grim and grisly, built around a disgustingly dense core of bone-grinding riffs and barbaric blastbeats, and is topped off with some suitably guttural and grizzly vocals… all of which is the product of just one man!

That’s right, this is a Death Metal solo project – I was honestly a little shocked when I learned that too – as well as another one of the year’s most striking debuts, which combines both face-melting ferocity and neck-wrecking brutality with some surprisingly dynamic, and demonicallyhooky, songwriting.

Opener “Word of God”, for example, is a blast-tastic assault on the senses which also happens to incorporate some massive, chuggy grooves reminiscent of Blood Red Throne at their stompiest and most steroidal, as well as a dose of electrifyingly evil melody, while “Master’s Corpse” is five and a half minutes of savagely spiky riffs, brutally barbed hooks, and sudden eruptions of scorching speed, that constantly keeps you on your toes while forging a conncetion to something primal and primitive in the deepest recesses of your brain.

The blend of slithering slowness and scorching speed which makes up “Bloodied Sacred Scriptures” combines the crushing density of Morbid Angel with the rabid intensity of Carcass, and so should not be missed (although I strongly suggest you don’t skip any of these tracks, if you know what’s good for you), while the blistering, blackened, assault of the title track is like biting down into a live wire while simultaneously slamming your head into concrete.

Mortal Angels Descent does lose a little bit of momentum right at the end – don’t get me wrong, the doom-laden crawl and scything tremolo of “Last Prayer” makes for a fantastic penultimate track, but the decision to end on a purely instrumental track, despite its plethora of surprisingly moody and/or majestic melodic touches, does make the album feel slightly unfinished – but overall this is a triumphant statement of intent which could/should put Necrochaos firmly on the Death Metal map.