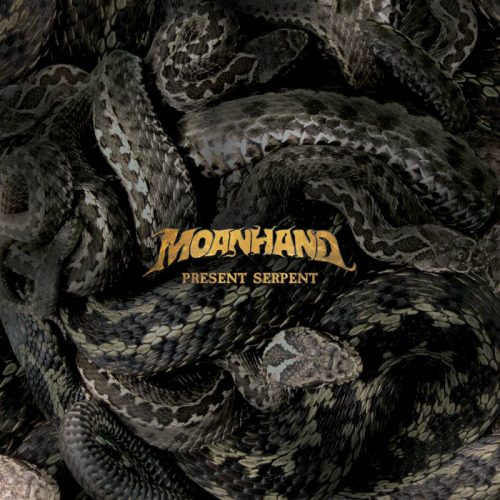 I know I’ve said it before, but it probably needs reiterating – June was so packed with releases that I feel like it’s going to take me all of July just to catch up with everything I/we missed.

Of course, that means that I’ll have to spend August catching up on July, and September catching up on August, so… maybe some hard decisions are going to have to be made regarding what does and what doesn’t get written about just so I don’t fall even further behind.

But there was absolutely zero chance that I wasn’t going to write about this one, as Present Serpent – the debut album from one-man “Blackened Dream Sludge” outfit Moanhand (aka Moscow-based multi-instrumentalist Roman Filatov) – has swiftly become, for me at least, one of the defining albums of 2021.

Sitting somewhere between Khemmis and Alcest – a blend which, on paper, you might not expect to work but which, once you’ve heard it, you’ll soon start to wonder why no-one’s done it before – these six songs marry brooding riffs and doomy dynamics, soaring vocal melodies and slithering tremolo runs, in a way that doesn’t quite sound exactly like anyone else out there.

Glowering, groove-driven opener “Serpent Soul” is a perfect introduction to Moanhand’s signature sound, all meaty, muscular riffs and rugged, rumbling bass-lines, intercut with a touch of blackened tremolo here, a dash of dreamlike melody there, and topped off with Roman’s absolutely captivating singing (as well as the occasional burst of snarling fury).

It’s a song that wraps its serpentine coils around you and tightens them so slowly that you hardly even notice how firmly it’s gripped you, and the way that “The Charmthrower” then picks up the melodic threads left over from “Serpent Soul” only to entwine you in them even more tightly, practically ensures that there’s no escaping this album once it has you in its grasp.

“Nightwings” is, if anything, even more captivating than its two predecessors, its near-perfect mix of moody riffs and melancholy melodies, one that’s also adorned with a truly spellbinding vocal performance, ensuring that it will likely go down as one of my favourite songs of the year, while “Endless Embrace” finds the album’s intensity levels hitting a new peak without sacrificing the almost ephemeral melodic nature of the band’s music (especially during the song’s scintillating second half).

Penultimate track “Raw Blessings” is another song which stands out just that little bit above the rest (and, truth be told, they’re all good) due to the way in which it weaves together its gloomy-yet-gorgeous grooves and mournful-yet-majestic melodies into a veritable tapestry of visceral sensations and vivid emotions (aided and abetted by the occasional bite of blackened venom), and while closer “The Boomerang of Serpents” doesn’t quite ascend to the same stellar heights, the shift towards a more purely Blackened Doom direction for the finale allows the album to plumb some even darker depths.

I’m not going to pretend that Present Serpent is a perfect album by any means – there’s always going to be room for improvement, after all, no matter who you are, and the addition of a “live” drummer (at least in the studio) would certainly be something I’d consider in the future if it were up to me – but I will tell you that I haven’t heard anything else yet this year that’s struck such a chord and made such an instant connection with me.

It really is something special.