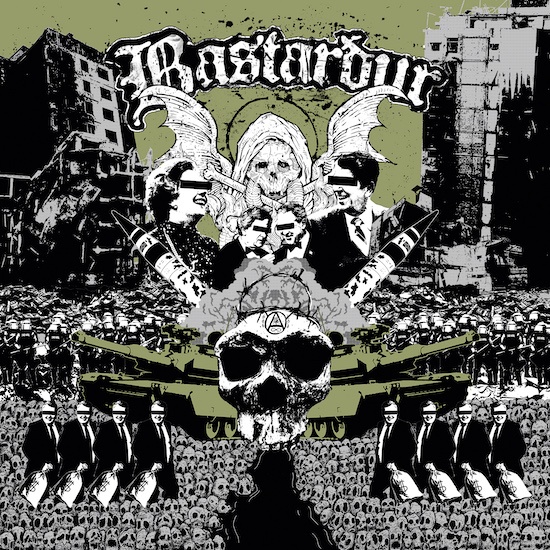 This is one of those days when we risk overwhelming even the most voracious listeners who visit our site. I’ve already posted a round-up of blackened metal and a full album stream, but can’t resist using some unexpected free time to pull together another collection. This one is rife with videos, most of them accompanying advance tracks from forthcoming releases, but there’s another full album stream in the mix as well. There’s a lot of stylistic variety in the mix too.

This first track came as a big surprise (at least to me). It turns out that Bastarður is the crust punk project of Sólstafir singer/guitarist Aðalbjörn Tryggvason, drawing upon the influence of such bands as Entombed, Napalm Death, Terrorizer, Motörhead, and Disfear.

He made Bastarður’s debut album, Satan’s Loss of Son, with drummer Birgir Jónsson (Dimma), and the album also includes guest vocals by Marc Grewe (Morgoth, Insidious Disease) and Prmordial’s Alan Averill, as well as guest guitar leads and soloing by Ragnar Zolberg (who has performed live bass for Sólstafir) and Þráinn Árni Baldvinsson from Skálmöld, among others. 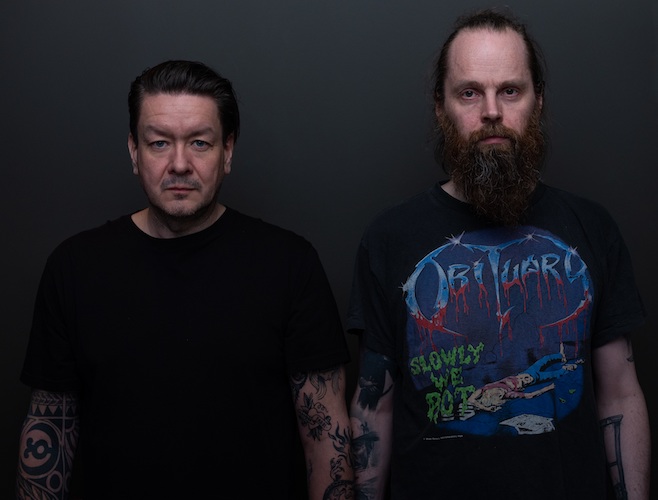 Both Zolberg and Baldvinsson contributed guitar leads to the first advance song below, and it also includes a bass solo by Flosi Þorgeirsson. The music is a big, mauling, adrenaline-fueled, d-beat ravager that rips and pounds, batters and brays, skitters and screeches, accompanied by rabid, scorching vocals. The grumbling and gouging bass solo becomes the preclude to hammering beats and quivering fevers, and to a channel-shifting dose of maniacal soloing fireworks.

I’m guessing the rest of this album is just as much hell-raising fun, and I plan to find out this afternoon.

Satan’s Loss of Son will be released by Season of Mist on October 29th. 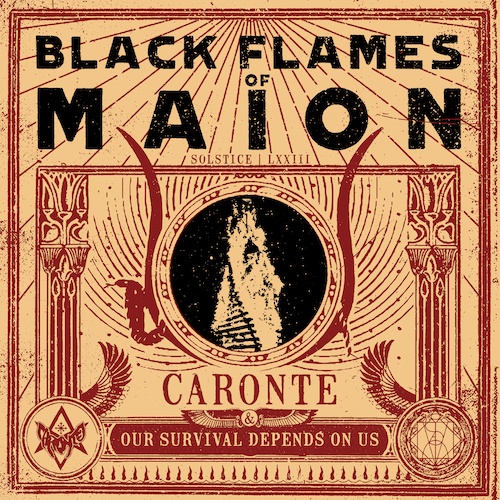 The next song, which comes with a riveting lyric video, is a single by the Italian occult-doom metal band Caronte that was released on the summer solstice. It includes guest participation by the Austrian band Our Survival Depends On Us. And it is definitely, deeply occult.

The multiply-voiced singing is spine-tingling, especially when combined in choral expressions, and the music is sinister, sulfurous, reverent, and exultant. It’s heavy and head-moving, but the wailing guitars create a feeling of extravagant hallucination as well. Hell, the whole song is spine-tingling, and magnetic.

“Black Flames of Maion” will eventually appear on a new Caronte EP to be released in March 2022, which will also contain three other forthcoming singles, each of which will feature a new special guest.

The next track also arrives with a video. The band’s vocalist/guitarist Naut explains this about the short film: “We witness an individual fleeing an unnamed malevolence, testing the fabrics of reality and the limits of human consciousness. This is a journey of cosmic significance through the maddening horror of the unknown”.

The music is a spinning, soaring wonder, capable of generating wide-screen visions of wild, dangerous abandon. The work of the rhythm section is tremendous, the vocals are frightening, and for all its splendor the music is undeniably menacing.

Slain In The Spirit is the album, and it will be out August 20 via Candlelight/Spinefarm. 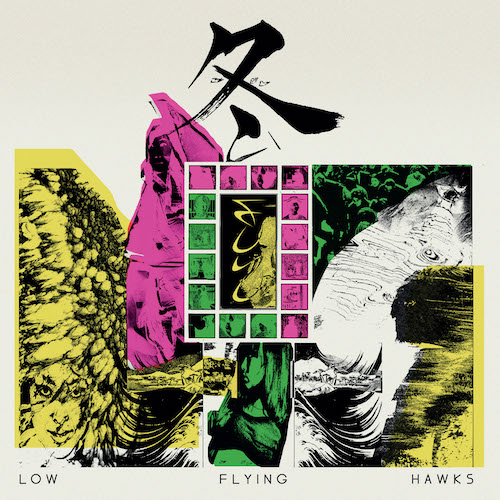 The opening of this next song sets the hook damned fast, thanks to a big, heavy, lurching riff, skull-popping drums, and a seething and shimmering backdrop of sound that injects a feeling of poison and peril. The song’s an exception to the rule in our site title, but the woozy and wailing singing is a big factor in the track’s appeal. As the vocals soar and shatter they help transform the music into a much more dark and unnerving experience — even though the slugging grooves will still make your head work like a piston.

The song is from the band’s third album, Fuyu, which will be released on August 27th by Magnetic Eye Records. There’s a more recent single out in the world as well (“Caustic Wing“), and I’ve included a stream of that one too. 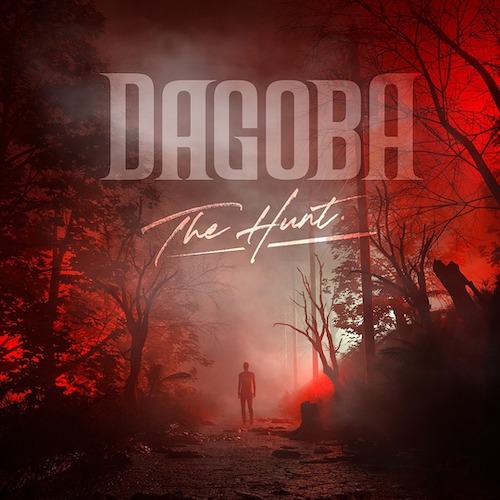 I checked out this next song and video mainly for nostalgic reasons, and wound up being hooked by it, and not just because parts of the futuristic video (which draws influence from Blade Runner, Drive, and Akira) include scantily clad exotic dancers.

Shawter‘s vocals are wild in their intensity and lycanthropic in their ferocity; the grooves are mountainous; the swirling riffs are venomous; and the slowly slithering guitar solo is spellbinding. The synths lend the song a futuristic and mysterious aspect, and it becomes plenty dark and foreboding by the end.

“The Hunt” is being released as a stand-alone 7″ and digital single by Napalm Records. 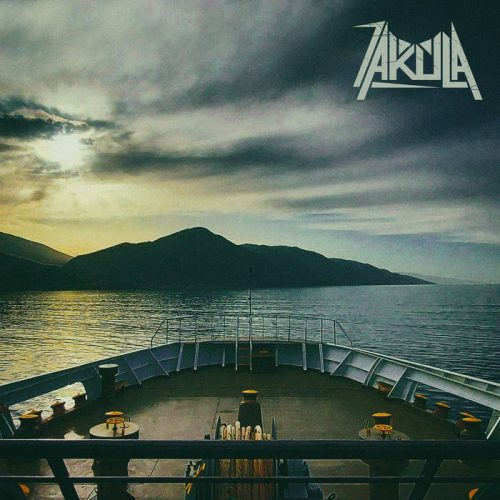 The next video captures Zakula‘s riotous performance of a song called “Atmosfear“, which is part of this Greek band’s self-titled debut album, digitally released on July 2nd. And the song is riotous too — jolting in its percussive assaults and mind-mutilating in its manifold guitar machinations and screaming vocal expulsions. There’s an eerie ringing interlude which would be enthralling but for the continued vocal madness.

The compass of the music unerringly points to derangement and fear, but the song incorporates elements of melancholy and abandonment as well, adding to an already multi-faceted display.

I haven’t yet made my way through the entire album yet, but I have heard the two opening tracks which immediately precede “Atmosfear” — “Fractals” and “Hollow” — and both are also really good. You’ll find a stream of the whole album via the Bandcamp link below. 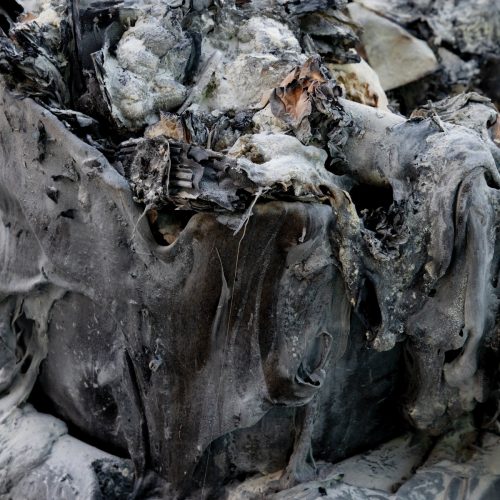 I confess I was tempted to check out this next song by Chicago-based Annihilus because of its title — “The Voice of Shai-Hulud“. And, in keeping with that title, the spoken-word part in the chorus is borrowed from a Fremen mantra first shared in 1981’s God Emperor of Dune.

Dark and mysterious at first, yet also capable of plucking at your pulse, the song stalks and stomps, shrouded in abrasive whirring guitars that bespeak desolation. The vocals sound like a man being torn apart by teeth, but they change, as does the song. It bounds and pounds, and the riffing seems to ascend in a fever, almost beseeching in its resonance, yet far from hopeful, and emotional collapse is the signpost at the end. The whole thing is remarkably gripping.

The song appears on Follow a Song From the Sky, this project’s second album, which is set for release on August 13 via Federal Prisoner.