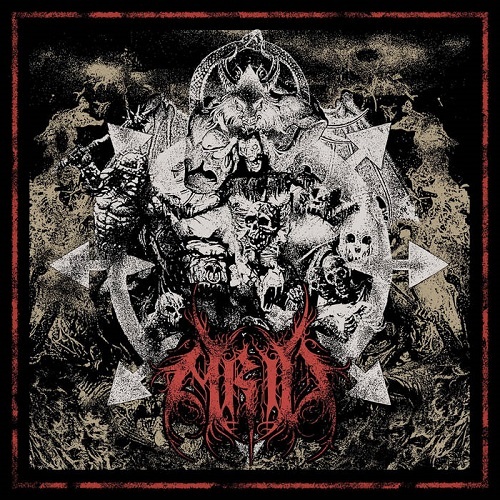 (Prepare for a short, sharp shock to the system courtesy of Andy Synn‘s review of the recently-released self titled album by Crust-Punk-Death-Metal crossover crew Arid)

In an ever more complex, chaotic, and downright confusing world it’s always nice to stumble across something utterly unpretentious, knowingly uncomplicated, and unapologetically nasty… something that doesn’t care about tropes or trends, clicks or cliques, and which solely exists for the purpose of kicking ass and busting heads.

Because, you know what they say… busting makes me you feel good.

Now I must admit, right off the bat, that I don’t actually know that much about Arid.

Other than the fact that the band’s three members describe themselves as “Anti-Human, Anti-Fascist, Anti-State”, and call Chicago their home, there’s not much info out there regarding their background, origins, etc.

One of the benefits of this, however, is that it makes it very easy to focus purely on the band’s music, a rough ‘n’ ready, hard ‘n’ heavy blend of blackened Punk and crusty Death Metal that pays tribute to everyone from Amebix to Bolt Thrower, Nihilist to Earth Crisis, without feeling dated or derivative.

The ten tracks – with an average length of around four minutes, some slightly longer, some slightly shorter – which make up this album all offer a slightly different variant on the band’s brutal methodology, ensuring that although their sound retains a crushing consistency and caustic coherence from top to bottom, it also displays just the right amount of variety and versatility to keep even the most jaded of listeners on their proverbial toes.

The album’s first “proper” song, “Sore”, for example, is four-and-a-half minutes of gloomy melody and grimy riffs, topped off with some suitably savage snarls and grisly gutturals courtesy of the band’s dynamic vocal duo, that doesn’t pull any punches or deviate from its destructive course once it gets going… while “Ouroboros” switches seamlessly back and forth between gruesome Grind and gargantuan groove and “Toxic Embrace” transitions from sludgy swagger to thrashy savagery over the course of four ferocious minutes.

And while none of the tracks veer too wildly from the band’s core formula – “Descent” is a primal, Punk-Metal war-anthem of chattering, machine-gun guitars and relentless rhythmic momentum, “Human Disease” is a barrage of brutally heavy (and hooky) Death-Crust, and “Bodies” is a morbid mix of dirge-like doom and face-melting fury – it’s the little touches here and there, the undercurrent of brooding melody of one, the booming, bass-driven bombast of another, which help them to both stand apart and stand alone even as they all fit together as part of the greater whole.

Let’s face it though, you don’t really need me to tell you whether you’re going to like this album or not – the whole thing is embedded and listenable in full below – and by the time you hit unexpectedly atmospheric, but still unflinchingly aggressive, closer “Fight or Die” you’ll doubtless have long since made up your own mind(s).

So what I’m here to say, really, is just check this out… you won’t regret it.