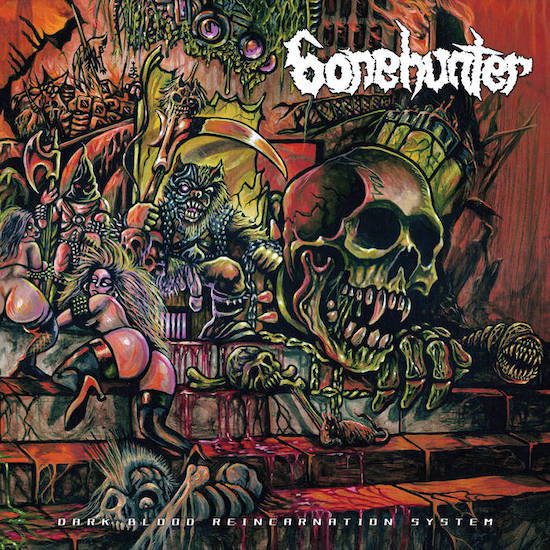 Finland’s Bonehunter just keep getting better and better, continually evolving in astute ways and zeroing in on an identity that’s now unmistakable and completely self-assured. Especially through their new album Dark Blood Reincarnation System, they’ve positioned themselves as preeminent purveyors of blackened-speed-metal-punk, indisputably maniacal and savagely lustful but also skilled in crafting songs that are immediately addictive.

As is so often true, even for music of such fire-storming extremity and riotous depravity, the quality of the music is rooted in the songwriting, and not just in the presence of riffs galore but in the dynamism of the music across the album and the head-hooking and blood-pumping nature of all the ingredients. We’ve got a prime example of this in “Parasite Eve“, the song were premiering today in advance of the album release by Hells Headbangers on August 20. 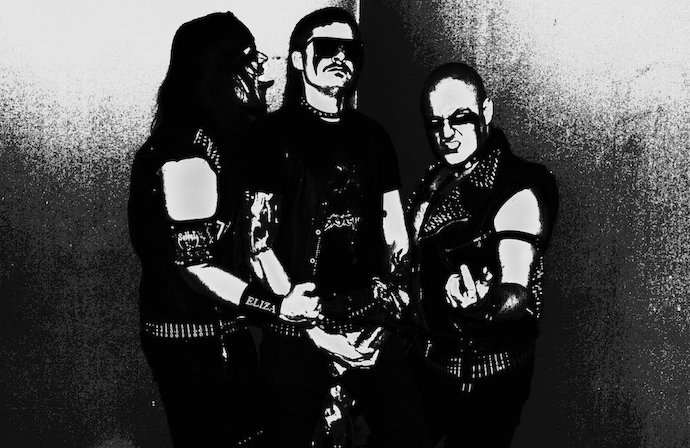 “Parasite Eve” moves at breakneck speed and hits like an injection of jet fuel straight into your neck. The rhythm section get a lot of prominence in the mix, and for much of the song they sound like a galloping herd of wild horses — whose hooves are pounding in spasms. They definitely provide a high-intensity, relentless propulsive momentum, but the pattern includes continual rhythmic bursts that add to the music’s crazed energy.

Certainly, the vocals are crazed — the kind of vicious, scorching madness that conjures images of demon wolves hopped up on bath salts and infected by rabies. And the riffing is every bit as wild, but with a dynamism that won’t be overlooked in the midst of all the brazen, siren-like extravagance. The fretwork channels feverish viciousness, sinister menace, and riotous heavy metal glory.

But what will really cause this song to blow off the top of your head is the extended guitar solo, which arrives just as the rhythm section start pumping like turbocharged pistons, and it sends the music to truly magnificence heights of heavy metal ecstasy — followed by a finale that’s thunderous and chaotic.

No doubt you’ve noticed that the player above also includes a stream of the previously released track “Black Magic M16“, and you definitely need to let that one invade your headspace too.

Hells Headbangers is releasing the album on August 20 in CD, tape, and digital formats, with a vinyl LP edition coming at a later date.

No Responses to “AN NCS PREMIERE: BONEHUNTER — “PARASITE EVE””