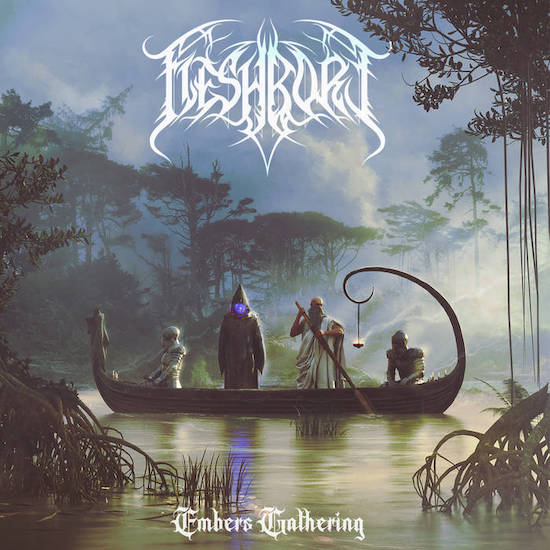 It’s our pleasure today to present a full stream of the debut album by the Indianapolis-based tech-death crew Fleshbore, which is set for an August 13 release by Innerstrength Records. It represents a redefining of the band’s sound over years of effort, and the results (to borrow some words you’ll see in the following review) are both body-mangling and mind-blowing.

In the opening track, “Momentum”, a compulsive rhythmic beat and grand ringing chords provide the introduction to an obliterating percussive assault accompanied by slicing, swirling, and darting fretwork and savage growls and screams. The music continues to morph, becoming both oppressive and eerily glorious, jolting the spine with punishing power and writhing like diseased reptiles. 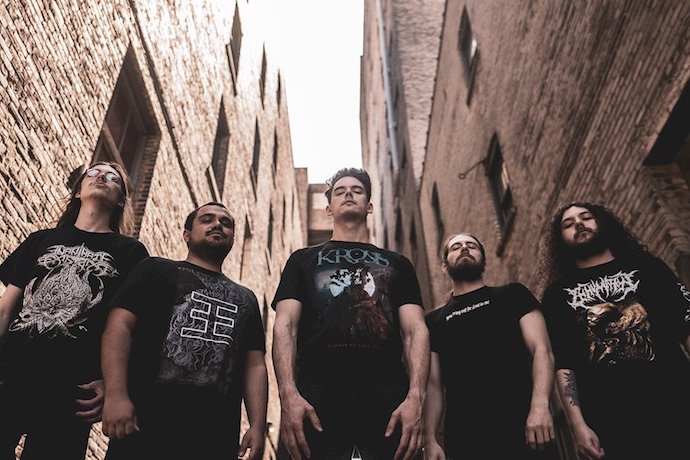 And from there the band continue to mount ravaging attacks, continually anchored by ruinous but electrifying drumwork and gut-punching bass, and delivering rapidly changing riffage that’s capable of spinning your head around but equally capable of insinuating alien melodies laced with dissonance that put chills down the spine. Throughout these onslaughts, the gruesome, gurgling gutturals, hair-on-fire screams, and raw yells (all of them frequently discharged at eye-popping speed) add their elements of ferocious madness to the mix.

Fleshbore’s instrumental dexterity is pyrotechnical, which is to say both mind-boggling and incinerating at high speed. They’re also capable of delivering such bone-smashing and bullet-spitting pulverization that you may feel bruised, battered, and broken as the album explosively runs you through its gauntlet. Yet the band wisely don’t stay in racing gear 100% of the time. Occasionally slowing the pace (“The Scourge” is a good example), they’ll still brutishly bludgeon you senseless, but they shift the mood from maniacal derangement to dismal, pestilential hopelessness and the frightfulness of encroaching alien menace.

Even when the music is flying at jet speeds, the kind of madness it channels can sometimes seem wildly exultant (as in the title track) — definitely still crazed and head-spinning in its technical acrobatics, but joyously so. At other times, the fretwork becomes so feverish and insectile that it’s a little unnerving, like a feeding frenzy of nasty, mindless things. Yet you’ll also encounter sudden shifts into beguiling melody (you’ll find both experiences within the bounds of “Revivified”).

In short, this is an album that’s one hell of a fast-changing, body-mangling, mind-blowing carnival ride, one that sometimes seems to hurtle the listener straight off the planet and into the midst of one off-planet menace after another. It comes recommended for fans of The Black Dahlia Murder, The Faceless, Sylosis, Cattle Decapitation, and Revocation — and it’s available for pre-order now in advance of its August 13 release date. 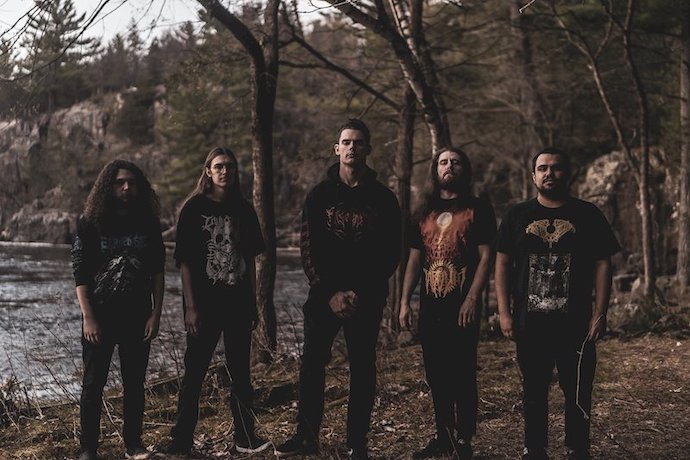 The band recorded the album with Jackson Ward at Strata Recording. Luciferium War Graphics created the visual representation of the album artwork, as well as a new logo.

P.S. In addition to the full album stream, we’re also including a guitar/bass playthrough video for “Careless Preacher,” which features the talents of Chavez, Daniels, and McGinley.