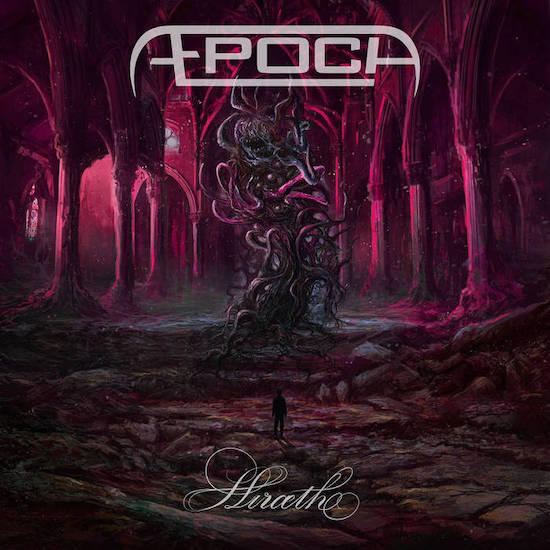 The Ontario progressive death metal band Æpoch are returning to the fray with a new line-up and a new EP set for release on September 10th named Hiraeth, and we’re presenting a track from it today. But before we experience “Amnesia“, we’ll share the band’s description about the chilling tale narrated through the music, which will illuminate the song you’re about to hear:

“Hiraeth is a concept EP about a character who has awoken in a post apocalyptic type environment with no memory of who he is or how he got there. He begins to wander in the desolate wasteland desert for days without any food or clean water. His body and mind grow weak from malnutrition and he begins to hallucinate. He eventually stumbles upon what appears to be fertile land. He sees a looming and eerie silhouette of some sort of decrepit totem. He becomes fixated on the monument.

“As he approaches, he gazes upon its carved trunk he notices the foul smell from all around him. This is the smell of the decaying flesh of those who walked this path before him, their minds consumed by the demonic spirit of the monolith. This creature, we call ‘The god of rot’ in the songs and the god of rot infects the mind of its victims, enthralling them to its will. The god of rot feeds off of the life source of its victims by having them sacrifice themselves once they are fully enthralled in a way similar to seppuku (Japanese samurai ritual suicide) and dress its limbs in their innards before they expire. The cover art depicts our protagonist approaching the god of rot.” 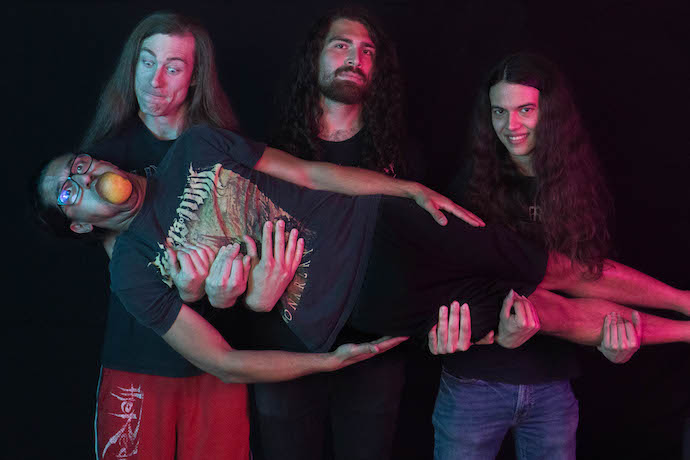 What a horrifying story! And perhaps not something you would expect to spring from the minds of the four dudes who posed for that^^^^ photo.

The song itself, which appears second in the running order, is itself an intense and head-spinning experience. Jittery, hard-hitting riffage and methodically skull-striking snare provide the backdrop for malignant growls (which include a guest contribution by Alustrium vocalist Jerry Martin). The music has a demented yet cold and predatory atmosphere, and the derangement blossoms in a blazing, darting, and spiraling dual-guitar solo that climbs to glorious heights.

The guitars scream and squirm, the fretless bass bubbles, and the drums cavort and careen as the vocals become more rabid in their barking and howling hostility. The band spin the intensity dial closer and closer to the red zone, creating extravagant mind-altering sensations, displaying considerable technical acumen and a mad-scientist approach to composition, with the instruments leaping and darting in displays of ebullient mayhem over hyper-speed drumwork — but eerie little tendrils of guitar melody quiver through the kaleidoscope of sounds in ways that prove to be unsettling, in keeping with the EP’s narrative theme.

Hiraeth includes the significant contributions of two new Æpoch members, guitarists Marcus Arar and Nicholas Luck, in addition to bassist/vocalist Brett MacIntosh and drummer Greg Carvalho, and thus charts a new course for the band into a “more refined progressive/tech-death direction”. The band further explain: “This EP also features our first dabble in the world of dissonance, while we tried to do it our way. Perhaps a little more melody and a little less melancholy.”

Below you’ll find pre-order info, plus the stream of another song off the EP, “The Flesh Totem“.