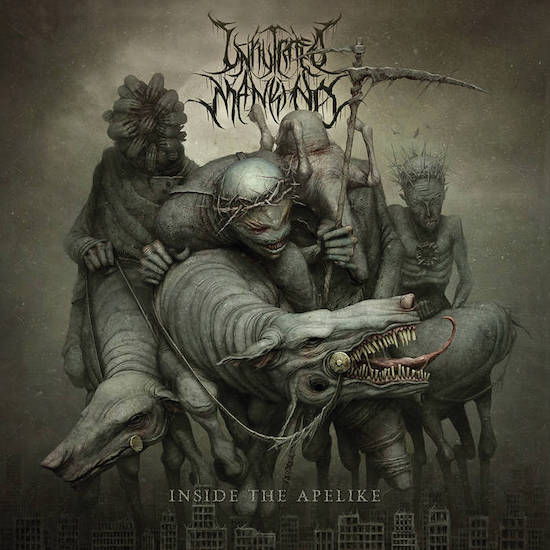 As a long-time fan of Russian artist Anton Semenov (aka Gloom82), his “Horsemen of the Apocalypse” cover art for Infiltrated Mankind‘s forthcoming debut album Inside the Apelike caught my eye before hearing a single note. As it turns out, the band’s music is also apocalyptic and freakishly good, as you’ll discover through our premiere of a track from the album today.

“World Wide Deicide” is crushing and crazed. It generally moves fast, which makes the overflowing abundance of technical acrobatics even more mind-boggling. With fingers flying at centrifugal speed, the guitarist (and yes, there appears to be just one) executes savage blaring eruptions, deliriously shrieking and blurting frenzies, bursts of rapidly veering angularity, and unnerving spasms of boiling mania. 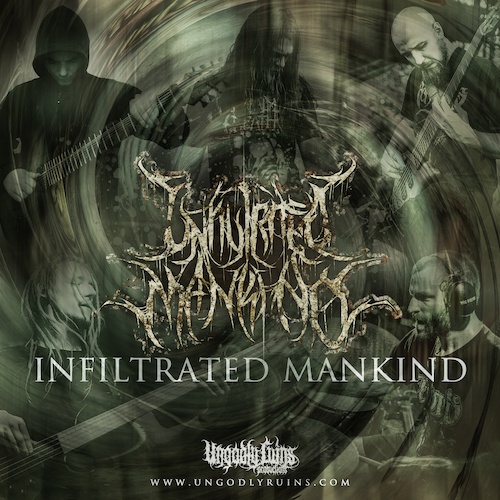 Meanwhile, the rhythm section thunder and blast, pound and punish, and generally deliver an obliterating but heavy-grooved beating that ties all the eye-popping escapades together despite the rapid changes that they themselves engage in. At times, the drumming decelerates into more measured cadences, to provide a backing foundation (along with menacing chords) for extravagantly swirling and flickering guitar solos that push adrenaline levels to an even higher zenith.

And to cap all these riotous performances, the vocalist is convincingly barbaric and bestial, and somehow manages to bellow, bark, and snarl the lyrics at a rate of speed that keeps pace with the racing instrumentalists.

Make no mistake, it’s a rabidly vicious song, but one that will give your astonished brain a blazing carnival ride.

We don’t know much about the core members of Infiltrated Mankind (guitarist Pale and vocalist Pest) other than the fact that they hail “from the heart of Baikal Lake, Eastern Siberia”. To aid them in their mission, they enlisted a terrific rhythm section to fill out the lineup, consisting of the Swiss drummer Florent Duployer (Kakothanasy, Anachronism) and a pair of bassists, the Russian Anton Zhikharev (Neurogenic, Fleshbomb) and the Ukrainian Zlatoyar (Endocranial).

Inside The Apelike is set for release on September 17th by Ungodly Ruins Productions, who recommends it for fans of Decrepit Birth, Spawn Of Possession, and Archspire. The album is available on CD, limited-edition didgipack, and digital formats, along with other merch options, and you can place pre-orders via the links below..

Below we’ve also included a stream of the album’s first single, “Lives Remain the Same“, which premiered at Metal Injection and which is just as much of an electrifying mind-bender as today’s premiere. Take some deep breaths and check it out too.