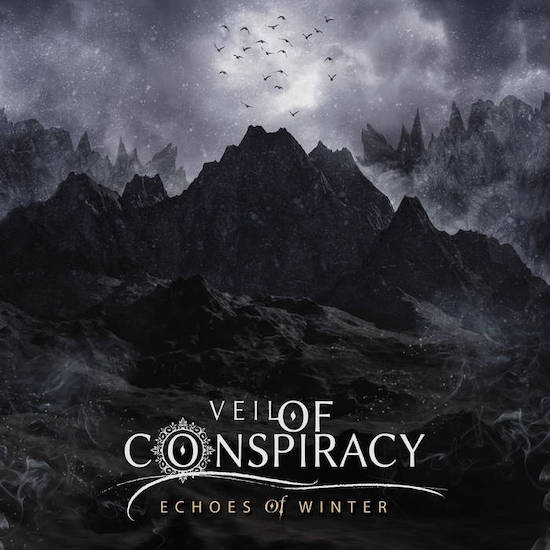 The seasons trace a cycle of death and re-birth in the natural world. Winter is commonly regarded as the season of death, the descent of bitter cold and stricken leaves, of creatures in hiding and comforts lost. These days, of course, death seems more ever-present than ever, with no regard for seasons, even as we think of baking heat and burning landscapes rather than frigid domains. Sometimes it seems that we’re in the midst of an endless winter of the soul.

Winter is the main protagonist of the forthcoming second album by the Italian band Veil of Conspiracy, and when you hear the band’s mesmerizing amalgam of doom, death, and black metal, you can easily understand it as a transfixing portrait not only of the season but of the darkness of our own freezing journeys through grief, despair, and solitude.

Echoes of Winter is the album’s name, and today we have a full stream of it for you in advance of its release this coming Friday by BadMoodMan Music. 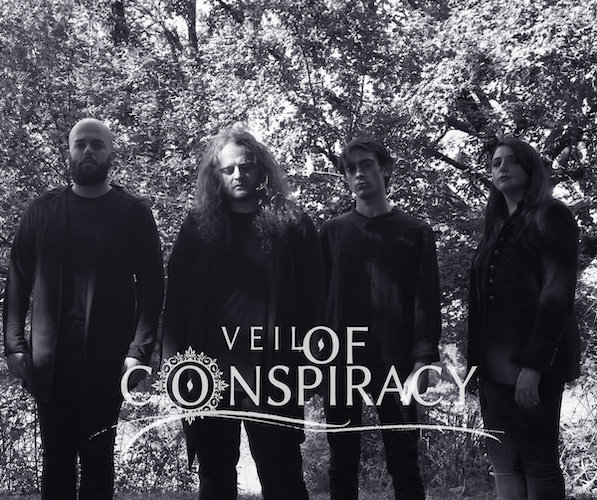 The album begins with a scream that goes on and on, and a shimmering wall of sound that transmits tension and despair. The ringing riffs gleam while the low end glowers, but together they capture peril and oppression, dashed hopes and the anguish of searching for a way out of torment but finding none. That opening title track also introduces the listener to the wistful and woeful poignancy of Alessandro Sforza‘s singing voice (whose silky smoothness is reminiscent of Jonas Renkse), which trades off with his soul-shattering screams, and to the jolting pulse of the bass and the neck-cracking drive of the drums.

The music washes over the mind like a dark tide, pierced by arresting guitar and piano vibrancy and propelled by visceral rhythms. The combination of jolting grooves, ethereal keys, and bleak but grand panoramic melodies is a hallmark of the album’s music, and so is the combination of soulful and soaring singing juxtaposed against larynx-torturing screams and cavernous roars. The music is wintry and vast, like heavy, wind-driven snow that blurs the eyes and chills the skin, but the fleet-fingered soloing makes it glitter, as if the sun is catching ice in the skies and making it wondrously shine. Both guitarists, Emanuela Marino and Luca Gagnoni, also shine.

But the music isn’t just a rendering of the aspects of winter that make it both dangerous and beautiful. The powerful emotions that course through the songs are very human, the moods recognizable and familiar. Those music connects to the strong roots of yearning and loss, of emptiness and grief, in our own experience. The vocals, both clean and harsh, are a vital source of that connection, but those roots are embedded in the immersive melodies as well. Even the powerfully propulsive rhythms seem human at a visceral level — the pound of the heart, the throb of the pulse.

To be sure, not all is gloom and defeat, ice and ashes. A spark emerges in all the songs, and not merely the exhilaration generated by the magnificent guitar soloing and the bright keyboard arpeggios. Often there’s a feeling of arms outstretched, of grasping at hints of light and succor, trying to embrace them. But it might go too far to say those moments are inspiring, because they’re so surrounded by moodiness and melancholy, peril and pain, loneliness and despair.

Sometimes you just need to sink like a stone into music like this, down into depths of cold and darkness. It’s a soundtrack that peals away the layers of your own memories of sorrow and brings them to front of mind, and provides a catharsis, and maybe even a therapy. It’s plenty heavy, and reaches heights of remarkable intensity, but it’s so elegant and beautifully crafted that the album experience is spellbinding more than anything else.

So, settle in and prepare to be spellbound, straight through to the closer “Where Sun Turns To Grey”, which includes a beautiful vocal guest appearance by Gogo Malone (Aeonian Sorrow), who also created the cover art.

It’s very likely that the album will appeal to fans of such bands as classic Katatonia, Opeth, The Morningside, Swallow the Sun, October Tide, and Wolfheart. It was produced by Luca Gagnoni and was mixed and mastered by the esteemed Stefano Morabito at 16th Cellar Studio.

BadMoodMan Music will release it in a jewel-case CD edition, and it’s available digitally from the band.

4 Responses to “AN NCS ALBUM PREMIERE (AND A REVIEW): VEIL OF CONSPIRACY — “ECHOES OF WINTER””