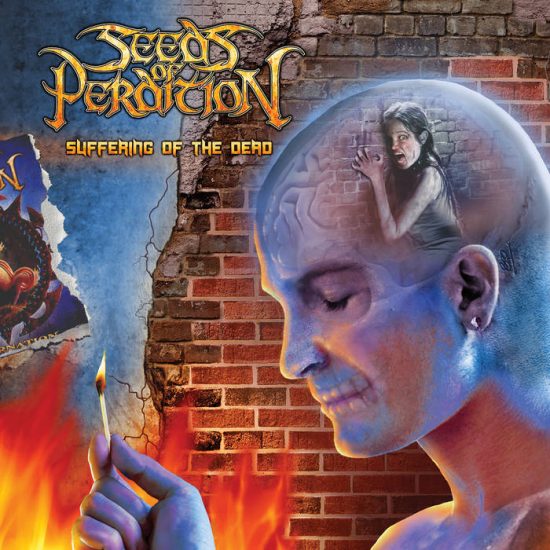 On September 10th Horror Pain Gore Death Productions will release Suffering of the Dead, the second full-length by the death/thrashing barbarians in Philadelphia’s Seeds of Perdition. As the label accurately forecasts, it delivers a barrage of raw intensity yet also creates the kind of atmosphere that simultaneously makes it “a terror stricken journey into the darkness of mankind”. We have the pleasure of letting you experience this pulse-pounding trip for yourselves today as we premiere a full stream of the album.

Straddling a line between rough and ravaging and sharp and cutting, the fleet-fingered riffs are lividly savage and slashing. They’re anchored by viscerally thrilling work by the band’s rhythm section, who propel the songs with skull-snapping snare-work, war-zone double-kicks, and gut-slugging bass lines. And at the vehement vanguard of the attack are rabid (yet clearly intelligible) vocals that roar, bark, screech, and howl at the moon, occasionally doubled in ghastly duets; in all their ferocious manifestations they’re electrifying. 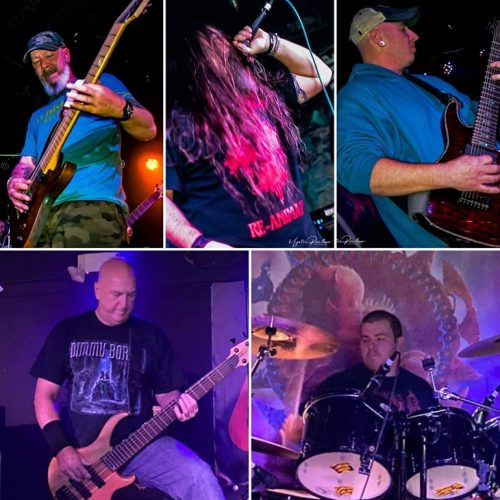 Gripping melodies surface within these primal assaults — melodies that slowly slither and manically flicker, creating moods of fear and misery, as well as supernatural horror and fire-breathing exultation.

The speed of the songs varies, ranging from hard-charging and fast-thrashing romps (displayed in such songs as the album opener “Dead Inside” and the album’s video single “Choking On Nothing”) to dark, menacing lurches (exemplified in the album’s second track “Sons of Corruption”, though it kicks into high gear too). “Sins Of Thy Father” lumbers like a great shaggy beast that’s emerging hungry from a netherworld and oozing narcotic vapors as it goes, while “God Ends Here” erupts in frenzied spasms of battering drums and feverish fretwork.

The riffing in the title track darts and whirls in displays of brazen ebullience but the song will also brutally jackhammer your head and bring down ruthless hammers of oppressive doom. “From Within” viciously seethes and maniacally darts, creating feelings of derangement, and the closer “Psychosis” (which is home to an attention-grabbing solo) repeatedly shifts gears, creating feelings of both unchained bedlam and macabre, stalking peril.

But regardless of pacing and mood, every song is heavy-grooved, with the kind of bone-smashing and head-rattling impact that will get your own adrenaline flowing and your neck moving. And like every other ingredient of these songs, they make the music somehow seem simultaneously riotous and precise, barbaric yet tightly executed.

And with that preview, we invite you to buckle up and dive in to the wild ride of Suffering of the Dead:

Suffering of the Dead was recorded at Rhawn Street Studios in Philadelphia (Incantation, Goreaphobia, Blood Storm), and it coms recommended for fans of Behemoth, Cannibal Corpse, Six Feet Under, Suffocation, and Testament. HPGD will release the record in CD and digital formats, accompanied by apparel. Pre-order and pre-save options are available now:

One Response to “AN NCS ALBUM PREMIERE (AND A REVIEW): SEEDS OF PERDITION — “SUFFERING OF THE DEAD””